Licensed User
Longtime User
I experienced this twice, first time in 1993 driving from Cincinnati to Washington DC.. I looked in the map and saw the I-70 goes a little north and then I have to go all the way south. But Route 50 East looked strait and very short and it goes right to downtown DC.. so I hit R-50. Gosh.. the first few hours were just perfect enjoying the green plains of Ohio, then I will never forget what happened next!
The road became narrow, just a single lane in each direction.. and then I started to climb the horribly zigzag narrow road of the appalachian mountains.. don't look down the cliff.. it is about 500 yards down, and right-angled to the road! and there was no way to U-turn.. so I continued to spiral the mountain until I saw a light at the top. my wife and I were both hungry and wanted to have something. But after we reached the top I found it was a gun shop! selling all kinds of guns and rifles.. It was snowing, but the shop owner told us that the snow is only at the top and when you start descending then down on the ground there is no snow.
The second time was when I was driving alone from also Ohio to New York, and it was raining when I started to drive down the Pennsylvania mountains.. I read the speed limit 50 miles.. and suddenly I found myself going down and there is a sharp left turn ahead.. the road was wet and with 50 MPH it was a guaranteed fall down to the far away valley.. very scary, forget about touching the brakes.
fortunately the road at that point had 5 lanes so I took the far left lane, and that gave me enough time to maneuver until I reached the turning point with reduced speed and turned safely. 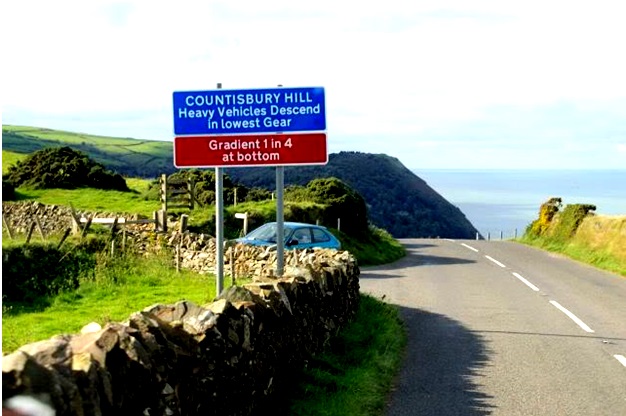