The ABMaterial library v1.20 and earlier require the ABM webapp content to be located immediately below a "www" folder on the web server. By convention the files below the "www" folder are assumed to be on the public Internet and accessible by a browser.

However, hosting companies are split on this architecture. Instead of "www", many hosts serve Internet content under the folder "public_html" and yet others provide both "public_html" and "www" for compatibility.

Our host follows the "public_html" convention. We could use a symlink to make "www" an alias for "public_html" but in general these things should be app configurable.

While ABMaterial's content structure should remain distinct, we propose adding two configurable paths where the developer can specify:
Here's a sample folder tree. 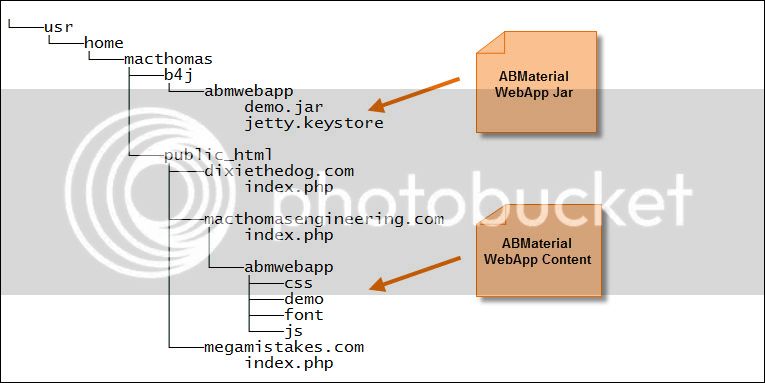 We have three websites hosted under "public_html." Note that DEMO.JAR and JETTY.KEYSTORE are located in a private folder above public_html and inaccessible to the public internet.

Following the example above the configurable ABM app and content paths would be:

Licensed User
Longtime User
I've been looking into it over night and it looks like I will be able to do this in 2.0. I have to keep compatibility with the original system (some components like the ABMPDFViewer have internal redirects). The location of the .jar file is not something I can choose while B4J compiles. However, by setting up your develop folders in a certain way, you still can do everything as before. Once you deploy, copy the .jar to the appropriate folder.

Example (no nice graphics as yours, but you'll get the idea )


B4X:
So it has the same structure (folder depths) in your development environment as on the production server with one difference:

In your develop environment, the demo.jar is in \objects (B4J defined) while on the production server it can be anywhere, as long as the depth of the folders match:

What will be needed to change in the code (it is mostly the same change to MyStaticFilesFolder, but just to be complete):

In ABMShared you will need to create a variable:

B4X:
In ABMApplication you need to change/add a couple of lines:

B4X:
In EVERY BuildPage (ABMApplication + every page you create), add

If you are using a download folder (e.g. for a ABMUpload component, you must change the downloadFolder also:

B4X:
This is the best I will be able to do. The reason it must be set on every page is because internally the ABMaterial class is unique and pages are unaware of an ABMApplication object. If this is ok, let me know and I implement it. Users that do not want to use this do not have to change anything.

Alwaysbusy
Last edited: Sep 17, 2016
Become a patron at https://www.patreon.com/alwaysbusy or

or scan the QR code if you like my libraries

This looks good and is essentially the same I did last week to separate the .JAR and webapp content. The only snag was the dependency of "www" needing to be the parent folder of the content.

I put all configuration items in a module called WEBAPP.BAS. I set the root folder location for the web content dynamically based on a simple File.DirData test. Then substituted WebApp.RootFolder and WebApp.Appname where applicable in the template code. On my development system all content remains under Objects/www as in the examples.

I see the AppPage.StaticFilesFolder method is new.

B4X:
Integrating with WebApp.bas it would look like this:

...while on the production server it can be anywhere, as long as the depth of the folders match:
Click to expand...

If you could just add this as a wish in the feedback app (a link to this forum post for the body suffices), I'll start working on this.

I'm thinking of building a 2.0 version (with the B4JS/ABMXPlay parts removed for now) by the end of this week so if this could be included too, it would be nice.
Become a patron at https://www.patreon.com/alwaysbusy or

or scan the QR code if you like my libraries

The ABM.CreateAbsolutePath() example above implies that the pathing between the .JAR and content are relative.

Instead we assigned the full path to the content location.

ABMShared.MyStaticFilesFolder="/usr/home/macthomas/public_html/macthomasengineering.com/abmwebapp/www"
You must log in or register to reply here.