Other Another "funny" feature similar to "public private variables"

I made a mistake (this is very unusual

Here I write different classes than the real project but they are fine to show the anomaly (or is it a feature?).
Two classes: clsPerson, clsGroup (which should have an Array of clsPerson objects).
One (empty) code module: modUtils.

Note: clsPerson - the wrong class I was writing in.

clsPerson:
Well, in this class besides seeing the private variables, a topic we have already written about... among the members of an instance of this class (again only inside the class) I see... the modUtils code module! [and the Main Form - I was developing in B4J]. 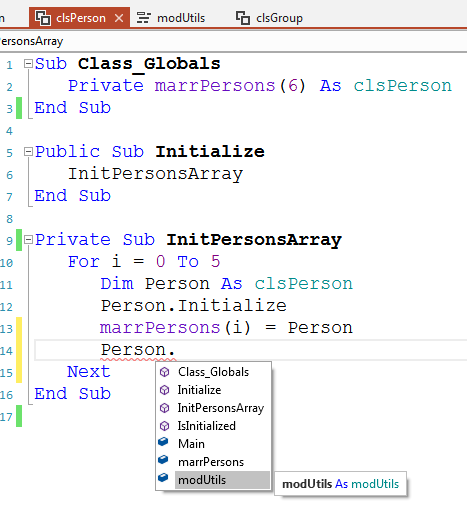 [I thought I would have attached the sample project but now it seems superfluous to me, the image is enough]


P.S.
I just noticed now that the modUtils member is shown as a modUtils type, as if it were a class.
I thought that, although it would be strange, it could be due to the fact that code modules in B4J are very similar to class modules but it is not so, the same thing happens in B4A.
Last edited: Aug 26, 2021
(AKA Mario) B4J Source code of lmSnippets Manager is here.

The first post is more than enough (and I think he has already read it).
(AKA Mario) B4J Source code of lmSnippets Manager is here.