Licensed User
I do a lot of these single line routines


B4X:
In all my single line routines I am getting a B4A v5 Error - End Sub missing

Licensed User
Is this restriction ever going to be removed?

But but...
What about
If coolguy = NJDude then coolguy = null

B4X:
Now just because you do not like it does not make it wrong.

Erel said:
Starting from v5.00 Sub and End Sub keywords must start on a new line.
Click to expand...

Fortunately, I did not know you could do that with B4A 4, otherwise... I would not have done that anyway
B4XPages is the most important new feature since the Resumable Subs.

Licensed User
I agree with Erel, and Luca, pretty unreadable, but as it was OK in previous version, that Erel choice to maintain that.


I hope that now it is more readable
B4XPages is the most important new feature since the Resumable Subs.

Staff member
Licensed User
I'm not sure that it will be supported in the future. The reason is technical.

The IDE parser needs to very quickly build the page structure. In order to avoid parsing all the code text it looks for the first word in each line to check whether it is "Sub" or "End Sub" (or #If, etc...).
B4X programming - video tutorials
All Android developers should read
Teaching programming with B4X

Licensed User
ok, I do not speak English well, but I think you understand that, in my opinion, put an "End Sub" in a non-blank line is deprecable.

It is hardly readable and maintainable.


Erel said:
I'm not sure that it will be supported in the future
Click to expand...

is a "good news"
B4XPages is the most important new feature since the Resumable Subs.
S

I don't know if C++ allows it but some languages even allow you to leave out the { } brackets if it is a single line if statement which makes even more sense.
Did you appreciate my help here or on the chat? Maybe it's worth a small donation? Thanks in advance!
Try out my free games for Android & IOS | Free app promotion with Tappx​

Licensed User
Erel. I understand your position. But this is a major change in style for me and currently stops me from upgrading to 5.x

Much as many may not like my style (as I do not like tabs in my code - but prefer spaces) to me coding is more like an artist painting a picture no two artists paint the same way and usually do not have the same style. But in the end they all have beautiful works to look at.

My style may be different, but wrote some code in the 1980's for mainframes that a friend of mine still supports (now that is a long time for some code to be around) was even coded back then to handle the 1999-2000 change because I new some day it was coming (and I got picked on for that), and the code is still running in 2015

I love one line coding. I can look at twenty or thirty lines at once and know all the functions in a module as seen below


B4X:
Now the above lines of code may look like crap here (because of Tabs) but you can see what they look like in the editor from the attached pictures.

Everything lines up nice, easy to C (Oops did I really mean C++) easy to read (my opinion)

All my code lines up. I am a fast typist and hitting the space bar is not a problem.

But thanks for all the feeback guys. 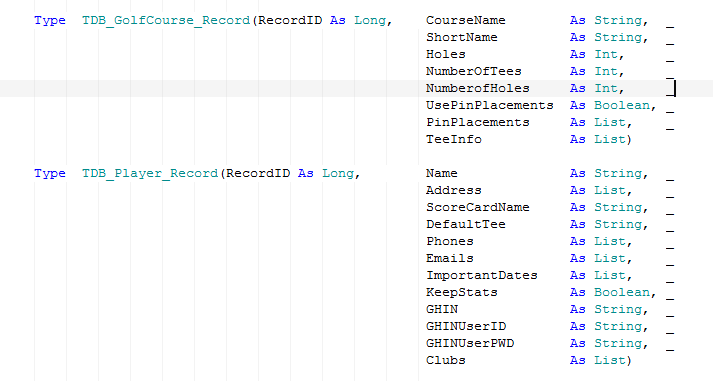 Licensed User
To be fair to you, I feel this is a step backwards because it is an IDE imposed restriction on coding style rather than a compiler imposed restriction. I'm sure the code is compilable in command line mode.
It makes B4A 5 to be not backwards compatible, but if that needs to be done then it should be made more clear, documented and not be incremental.

Robert Valentino said:
I love one line coding. I can look at twenty or thirty lines at once and know all the functions in a module as seen below
Click to expand...

1) those "are" (should be, if their name started with a lower case "set") Properties, and one line of code only;
2) you can be an artist when you design your sw, but to keep the code maintainable and readable, perhaps even by other people, it is better to be at all artistic;
3) if your routines would consist of many lines, you may see them listed, each in a single line, collapsing the page (module). Use Regions to group routines is another big advantage.
B4XPages is the most important new feature since the Resumable Subs.
You must log in or register to reply here.
Share:
Facebook Twitter Reddit Pinterest Tumblr WhatsApp Email Link
Top