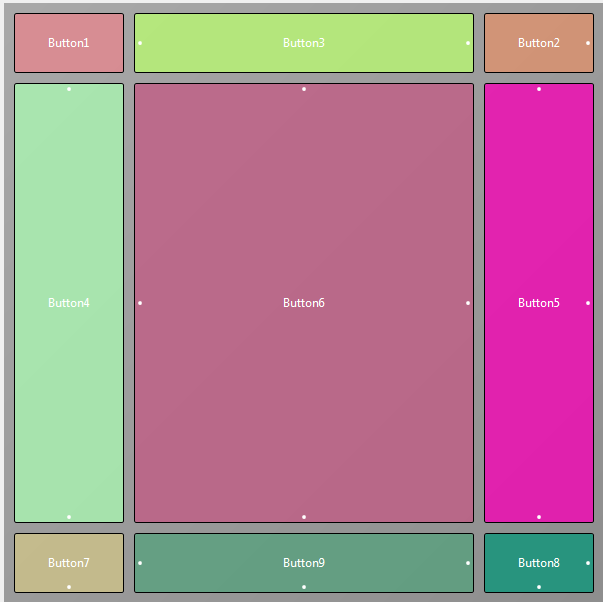 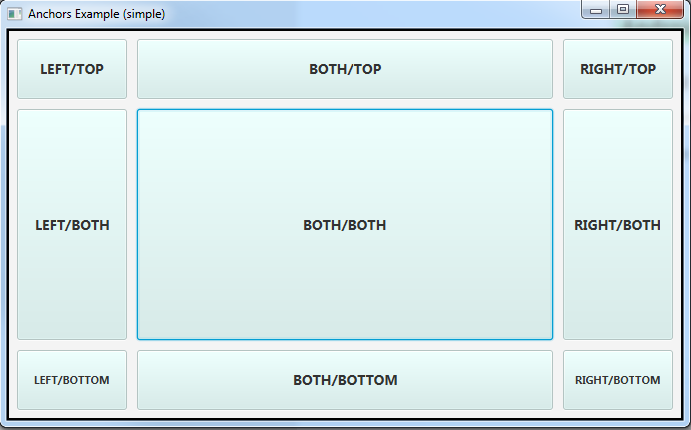 The anchors feature is simple to use and is very effective with implementing flexible layouts.

By default the views position is relative to the top left corner.
There is nothing special about this corner and there is no real reason for all views to be position based on the distance from this specific corner.

There are many things that cannot be done with anchors. For example you cannot put three buttons side by side (with the same width) and fill the available space. This should be implemented with a simple designer script.

Note that the anchors effect ends right before the designer script starts.

The attached jar file is a B4J app that demonstrates the effect of anchors. It includes two forms. One with a simple layout and another with the same layout loaded multiple times. The second demonstrates the important fact that anchors are relative to the parent.
There is no code, other than the code that loads the layouts, or designer script in this example.

If Java (8.40+) is installed on your computer then you can double click on the jar to run it.
Run it and change the forms size to see the (trivial?) effect.

Licensed User
Longtime User
@Erel i use on all my apps %x and %y
has an advantage in exchange (%) for anchoring?
Empresário | Programador | CTO

Douglas Farias said:
i use on all my apps %x and %y
Click to expand...

Using percentage for the layout is a good solution for games. For other types of applications you will usually get bad results. It will just stretch the whole layout and will not effectively use the available screen estate.
[B4X] Features that Erel recommends to avoid
[B4X] "Code Smells" - common mistakes and other tips
B

Erel said:
There are many things that cannot be done with anchors. For example you cannot put three buttons side by side (with the same width) and fill the available space. This should be implemented with a simple designer script.
Click to expand...

In this layout only Button4 is set correctly.

1. The horizontal or vertical BOTH setting should only be used for large views that should fill the parent view.
2. There can never be more than one view with the horizontal setting set to BOTH on any horizontal line, unless the views belong to different parents.
The same is true for vertical anchors and any vertical line.

When the form get narrower Button1 disappears: 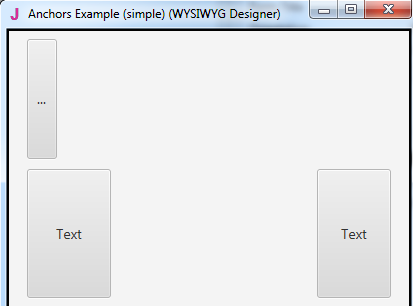 When the form gets wider Button2 and Button3 overlap:

But imagine 4 horizontal buttons.. if you set the first button at LEFT , the second button at LEFT, the third button with BOTH and the fourth at Right.

this results in a totally disproportionate to the other third button. As you can do to make the 4 buttons have the same width and covering the entire width of the screen?

Staff member
Licensed User
Longtime User
Anchors are not the solution for everything. You will need to use the designer script to layout four buttons horizontally.
[B4X] Features that Erel recommends to avoid
[B4X] "Code Smells" - common mistakes and other tips
A

Staff member
Licensed User
Longtime User
There is no project. It is just a layout file with the anchors set as in the first screenshot.
[B4X] Features that Erel recommends to avoid
[B4X] "Code Smells" - common mistakes and other tips