This is a Custom view b4xlib that I created to add to my LogServer, I though it may come in handy for other purposes so I'd share it here.
You can have any number of channels (Rows) and a practical limit of 32 LED's (Columns) per channel as the state for each channel is stored in an Int, which is a 32 Bit variable. If you really want more you can change the State variable to a Long and then get up to 64 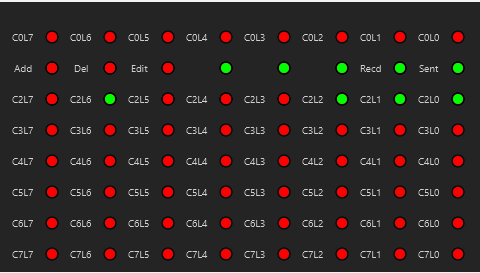 There are demo apps for B4j and B4a, I don't know if it will work for B4i, if you want to try it you will need to edit the manifest in the b4xlib.

It will help if you know, or are willing to learn, how to manipulate bits with the Bit Command.

Let me know how you get on with it.

Licensed User
Longtime User
Of Course, my mistake
If you profit from my contributions or just find them useful feel free to:

​
You must log in or register to reply here.