In computer programming, conditional compilation is compilation implementing methods which allow the compiler to produce differences in the executable produced controlled by parameters that are provided during compilation.
Click to expand...

Conditional compilation allows you to exclude parts of the code based on the selected build configuration. You can use it to create several applications from the same project. For example you can create one application with ads and another application without ads.

The conditional symbols define the active compiler symbols. This allows you to exclude parts of the code based on the chosen build configuration.
You can set multiple symbols separated with commas.

With the conditional compilation feature you can exclude any code you like from the code editor, manifest editor and designer script (any text can be excluded, including complete subs and attributes).
Excluded code will not be parsed and will be effectively removed before it reaches the compiler.
Note that the manifest editor and designer script will not visualize the excluded code. However it still works properly. 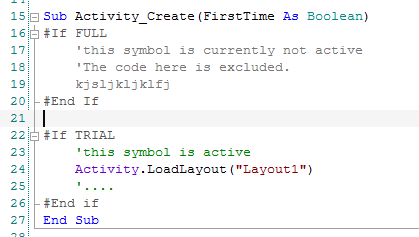 B4X:
Each build configuration holds a set of symbols. Multiple configurations can share all or some of the symbols. This makes it possible to include or exclude code in several different configurations.

Licensed User
Longtime User
So if I have to handle different versions of my app I can compile the Apk in this way:

So in this way I can exclude code or customize my app code based on this configuration. It is correct?

Licensed User
Longtime User
If I have to implement 2 interfaces (ex. "Customer App" and "Manager App") within the same project and than I wish to create the related APKs in order to publish they on the Play Store.
I can't use the same package name with different configuration (conditional compilation) but I must compile with two different package name (ex. myapp.android.cust and myapp.android.manager) ?

Otherwise the PlayStore handle the app as one single app and not as two different apps (also if I have implemented the conditional compilation). It's Right?

Licensed User
Longtime User
You can set different package name for different build configurations.
You like my libraries and tutorials? Please make a donation

Licensed User
Longtime User
You can set in "Project-Build Configuration - Create New" a new configuration with different package name
You must log in or register to reply here.