In this tutorial we will use the following web service to convert currencies:
http://www.webservicex.net/CurrencyConvertor.asmx/ConversionRate?FromCurrency=USD&ToCurrency=EUR 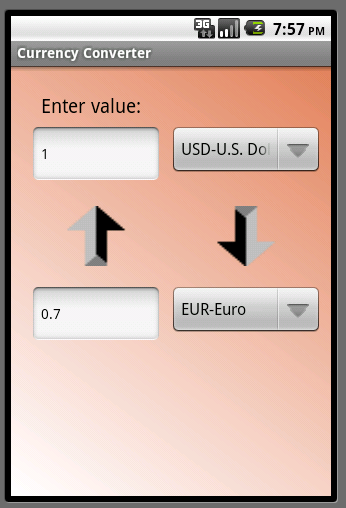 There are several important aspects in this application.
This tutorial will only briefly touch each topic.

Files
You can add files to your project using the Files tab: 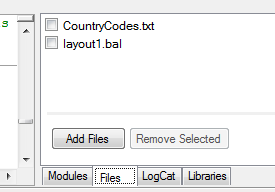 In our case we have two file. CountryCodes.txt is a text file containing the list of currencies. Each line contains exactly one value.
layout1.bal is the layout file created with the designer. Layout files are added automatically to the file manager.
Note that the layout file contains another two image files, the buttons arrows. These files are listed in the designer. If we remove layout1.bal they will be removed from the package as well.

The packaged files are also named assets. Locally they are stored under the Files sub folder.

This code reads the text file and stores the data in a list:

B4X:
File.ReadList is a convenient method that opens a file and adds all its lines to a List. Files are always referenced by their folder and name.
The assets are referenced by the File.DirAssets value.
Android file system is case sensitive. Which means that image1.jpg is not the same as Image1.jpg (unlike Windows file system).

You can create new types or structures using the Type keyword. Later you can declare variables of these new types.
Types can hold any other objects, including other types and including themselves (and including arrays of all of these).
Structures will be covered more deeply in a different tutorial...
Structures are declared in one of the global subs.

B4X:
This code declares a type that holds two EditTexts (textboxes) and two Spinners (Comboboxes).
We also declare a variable of that type named CurrentTask.
In the code you will see that we have another type named StateType which we use to store the current state.

All views have a property named Tag. You can set this property to any object you like.
We are using it together with the Sender keyword to handle both buttons with the same sub. 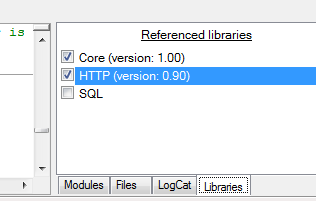 As you can see in the image, the Libraries tab page shows a list of available libraries. The checked libraries are referenced. Note that you cannot remove the reference to the core library.

Libraries are made of a pair of files. The xml file that describes the library and the jar file which holds the compiled code.
Additional libraries and updates to official libraries are available here: http://www.basic4ppc.com/android/wiki/index.php/Libraries
Note that only users who bought Basic4android can download these libraries.
To add a library to Basic4android all you need to do is to copy both files to a folder recognized by Basic4android.
By default this is the 'Libraries' folder that is usually located in: c:\Program Files\Anywhere Software\Basic4android\Libraries.
You can also configure an additional libraries folder by choosing Tools - Configure Paths. Note that the additional folder is scanned first for libraries. This means that you can update an existing library by putting the new files in the additional libraries folder (there is no need to delete the old files from the internal folder).

The Http library includes three objects.
HttpClient - This is the main object that executes and manages the requests and responses. The HttpClient can execute multiple requests concurrently.
It is very important to declare it as a Process global. The HttpClient handles requests that run in the background and it should not be tied to the activity life cycle.
Communication is done in two steps. First a connection is established by sending a HttpRequest object and then the response is read from the server.
The first step is always a non blocking action. It can take a long period till the connection is established and you do not want to make your application be non-responsive at this time. Note that Android has a special "Application not responding" dialog which allows the user to force close the application.

The second step, which is the consumption of the response can be either blocking or nonblocking. If you download a file for example you should probably choose the nonblocking option.

This code creates and sends the GET request.

B4X:
We are setting the timeout to 10 seconds which is quite short. The default is 30 seconds. The target web service is pretty unstable, which makes things more interesting. I prefer it to fail fast in our case.

HttpClient.Execute method receives two parameters. The first is the request object and the second is the Task ID. This integer will be passed back in the ResponseSuccess or ResponseError events.
It allows you to differentiate between different tasks that may be running in the background.
HttpClient.Execute will return false if their is already a running task with the same ID. This helps you prevent unnecessary multiple requests.
You can also check the status of running tasks with the IsBackgroundTaskRunning keyword.

Once the response is ready, ResponseSuccess or ResponseError will be raised. If things went well, we can now read the response, find the rate and display it. Otherwise we display a "toast" message with the error message.

As I wrote above, this specific web service seems to be unstable so your experience may vary.

As discussed in the life cycle tutorial we are required to save and restore the state of the application. In our case the state is made of the values in the text boxes and the current selected currencies.

The following type and variable are declared in Sub Process_Globals:

B4X:
On the first run we set its values with the default values we want:

B4X:
Later we save and read it as needed:

B4X:
In Activity_Resume we read the values and set the required views. Note that Activity_Resume is called right after Activity_Create. So it will also be called on the first time we run the application.

In Activity_Pause we save the value in the state object (which is a process variable).
Note that if the user pressed on the back key (which means that he wants to close our application) we return the state to the initial state. Therefore the user will see a "clean new" application the next time he will run our application.

It is worth paying attention to this line:

B4X:
CurrentTask is of type MyTag.
It has a field named FromCurrency which is of type Spinner.
Spinner has a property named SelectedItem which returns a String.
String has a method named Substring2.

Also note that this code is valid:
"abcd".Substring(2)
The complete code (file is also attached):

Licensed User
Longtime User
Correct my correction. It should be File.Readlist

Licensed User
I do not see it mentioned specifically in the documentation so I thought I would mention that the URL string can include a reference to a non-standard (other than default port 80) port where necessary, such as:

So using this library I could connect my app to a telnet server for example? Hmzzzz. Very very interesting.

Staff member
Licensed User
Longtime User
Telnet protocol is different than the Http protocol. You will need to use the Network library and implement the protocol yourself.
[B4X] Features that Erel recommends to avoid
[B4X] "Code Smells" - common mistakes and other tips
B

I just started using Basic4Android and am trying to download data from a SQL database via a web service. The XML string I will be downloading will describe multiple fields and multiple rows. Is there an easier way to extract the data from the XML file other than parsing it like you did in the example?

Staff member
Licensed User
Longtime User
Yes, you should the XmlSax library to parse the result.

See this tutorial: XML Parsing with the XmlSax library
I also recommend you to check this tutorial: Connect Android to MySQL Database Tutorial
[B4X] Features that Erel recommends to avoid
[B4X] "Code Smells" - common mistakes and other tips

Licensed User
Longtime User
I have found a solution to my own question by using multiple HttpClientXX.
Last edited: Mar 5, 2012

Staff member
Licensed User
Longtime User
I recommend you to use HttpUtils and create a Job with all the Urls.
[B4X] Features that Erel recommends to avoid
[B4X] "Code Smells" - common mistakes and other tips

Staff member
Licensed User
Longtime User
It means that the server has encountered an error. It may be related to your request (bad input) or it may be any other server problem.
[B4X] Features that Erel recommends to avoid
[B4X] "Code Smells" - common mistakes and other tips
P

Licensed User
Longtime User
There is a spelling mistake in the first post. We have two file...

Licensed User
Longtime User
Hi, I've been trying to use this example. I am using the HttpClient1 to read data from YouTube, I get the following error:

This is my code

Staff member
Licensed User
Longtime User
I don't see the problem in this code. However I highly recommend you to use HttpUtils2 instead of HttpClient directly.
[B4X] Features that Erel recommends to avoid
[B4X] "Code Smells" - common mistakes and other tips
J

Licensed User
Longtime User
Ahh thanks, I found what the problem was scheme parameter = "https"
G

First of all thanks for the great tool!

I am just starting out and I am new to Android especially Basic4Android.

Just I notice that the Spinner seems to be different than the Drop-list as we know for e.g. in HTML or JSP.

The Spinner always load one String entry as value/label for each item. But not as a separated value and label.

If I would like to show only the label (Item *) and hide its value (1, 2, 3), does it mean that I have to loop on the Spinner and extract the value from the whole string for each item in order to achieve this?

If yes, how can it be achieved effectively? I mean where should the value (1, 2, 3) of the respective item to be saved and how it shall be retrieved when the item is selected?

I had checked the API for this Spinner and adding entry as Map is not possible also. Kindly advise.

Thanks so much and apologies for the lengthy question.

Staff member
Licensed User
Longtime User
Note that you should have started a new thread for this question.

You can use a simple List to store any additional data. You can then get the additional data based on the selected item index.
[B4X] Features that Erel recommends to avoid
[B4X] "Code Smells" - common mistakes and other tips
G

I was too focus on the view only. Your answer should be the great option.

Thanks a lot!
You must log in or register to reply here.