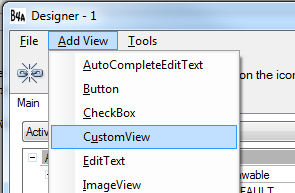 Licensed User
Longtime User
I must create for my PhD an application for blind users. so i created an interface with buttons as customview. the blind user put a finger on screen and with TTS i can speak what button is. when he get wanted button he can doubleclick on it to start proper activity. till now all is fine.
but if the blind user is moving the finger on the screen without lifting the finger, when he get another customview button the method singleclick is not fired to use TTS, only if the finger is lift and put again on the screen.
can you create another method for customview like touch for a button (in addition to singleclick and doubleclick) ?

Licensed User
Longtime User
@laviniut
This question is in the wrong forum, I have replied here.
If you profit from my contributions or just find them useful feel free to:

First of all, congratulations for this excelent product! It only took me 1 week to decide about buying a license. :sign0098:
Now, I have a question. I want to use the Designer's support for custom views and don't really get what should I do to "register" the "tableView" class (here).

However, when I run the application it stops on the setHeaders sub within the class. It keeps saying that the Header panel should be first initialized.

Any clues on that?

Thank you very much.

Staff member
Licensed User
Longtime User
It is not possible to make the Table class a "custom view" without breaking existing code. Currently custom views miss a feature which is support for custom fields. I believe that this feature will be added in the next version. For the Table view I think that it is better to wait for that feature and only then modify it to be a custom view.
[B4X] Features that Erel recommends to avoid
[B4X] "Code Smells" - common mistakes and other tips

Props - a Map with additional entries. Currently the only entry is an "activity" key that holds a reference to the parent Activity object.
Click to expand...

I made my Vseekbar a cusom view, but how do I add the Max Value to the props map ? I had to cheat and put it as lbl.text and then use it...
The "Currently" means it is not included or it is in the example ?

Licensed User
Longtime User
Thank you Erel. The problem is how to handle different screen configurations and rotation with a tableView. However, I think that falls a little off-topic here. I will open the question in another thread. Thank you.

Licensed User
Longtime User
Is it possible to call Base.LoadLayout("xxx") in DesignerCreateView sub?

I have a simple layout with a seekbar and a label I want to load. If I try to load the layout in DesignerCreateView I get a Classcastexception

You like my libraries and tutorials? Please make a donation

Licensed User
Longtime User
I had a similar problem, I don't think you can do it directly in the DesignerCreateView sub, presumably because when that is running, a layout is still being loaded so you would be nesting loadlayouts and all the required layout details may not have yet been calculated .

I put it in a separate sub and used callsubdelayed from within DesignerCreateView.
Last edited: Jun 4, 2013
If you profit from my contributions or just find them useful feel free to:

Staff member
Licensed User
Longtime User
stevel05 is correct. You should use CallSubDelayed to load the layout after the current one loads. You can see an example here:
[Class] AnotherDatePicker - A simple "web style" date picker
[B4X] Features that Erel recommends to avoid
[B4X] "Code Smells" - common mistakes and other tips

Licensed User
Longtime User
Hi Erel,
Could you please add in the Props - Map also the Parent view of a CustomView.
Props.Get("activity") returns the Activity.
When a CustomView is on a Panel I would like to get the Panel object with something like Props.Get("parent")

Staff member
Licensed User
Longtime User
For now you can use this code:

Is there a way to show and adjust properties of my CustomView in designer ?

Staff member
Licensed User
Longtime User
The user can change the standard properties and the text properties. You should then get these properties from the Panel and Label passed to the DesignerCreateView sub.
[B4X] Features that Erel recommends to avoid
[B4X] "Code Smells" - common mistakes and other tips

Licensed User
Longtime User
So, for now custom properties must be set in code.
Do you think you can in the future add something, for example #something marker, on property to expose it in designer ?

Do you think you can in the future add something, for example #something marker, on property to expose it in designer ?
Click to expand...

I believe that it will be added in the future.

For custom properties you can now use the Tag property (for example with a comma separated values).
[B4X] Features that Erel recommends to avoid
[B4X] "Code Smells" - common mistakes and other tips

Licensed User
Longtime User
Hi,
I have used this example to create my custom view class, but two things don't work as expected:
1. I don't seem to be able to add the view from code and add it straight to the parent view in the activity (the Designer approach isn't appropriate for my project). I want to be able to write code like:

B4X:
That doesn't work because B4A doesn't recognise my class as a subtype of View. Instead I have to expose the base view from the class and use that instead.

2. B4A doesn't recognise my event signatures with the standard "sub<space><tab>" approach. I have to hand code them in the activity module.

Any ideas?
Thanks
Andrew

Staff member
Licensed User
Longtime User
Note that if you don't intend to add the view with the designer then there is no need to use this feature. The only reason for adding the DesignerCreateView method is to make it compatible with the designer.

1. This is how it works. Another option is to create an "AddToPanel" sub in your class and then add the views to the panel from your class code. You can also pass an Activity instead of a Panel.

2. The events will only be recognized if you compile your class into a library (which is a very simple step) and reference the library.
[B4X] Features that Erel recommends to avoid
[B4X] "Code Smells" - common mistakes and other tips