Specifically what does this option do when you click it?, I see it does something, but don't know what it is, sometimes just saves the layout, some other times it just refreshes screen and then does nothing (apparently), If Open is for opening layouts and save is for saving them, then what does LAYOUT do? 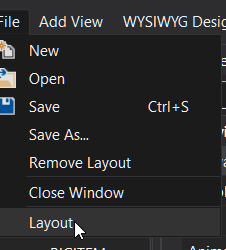 Licensed User
Options below Close Window are the names of available layouts. In this case its name is 'Layout'. Clicking it loads it in the preview on the right so you can modify it.
Upvote 0

Licensed User
Interesting question. It looks like based on your windows color scheme, the "separator" is hard to see. Now I can't say thatUI would help huge, but I have/see this:

This suggests that the "separator" could be thicker - might help somewhat. As noted,, the name "LayOut" is a default layout that is created for you. I would thus suggest that MyLayout might have been a better name. Overall - minor UI issue. As noted, as you create your own layouts, they will appear as per above. In above, I of course deleted "Layout" and made a bunch more screens/forms/views - so the above shows the list of those views/forms I created, and thus I can simple click on anyone to select for viewing + changing in the view designer.

If you use a dark theme for the IDE, then those "separator" lines in the menus tend to disappear - and they probably would not as noted helped a lot with your question.

And when you create a new project? You now get a layout created automatic.
Cute story:
I think for the last 20 projects, the FIRST thing I did was create a blank layout, and THEN drop in a button. Guess what, the newer versions of B4A now do this for me! - (the B4A develops at night clearly snuck into my brain at night, and downloaded a B4A map - and adopted what I do over and over!!!).

The other nice UI change? I always had to create a new folder for each project, and then placed the files inside. Now? A new project does this for me.
So, B4A nailed this on two accounts - its minor, but is in fact a nice and welcome touch in B4A.

Simplicity is the key...
Upvote 0
You must log in or register to reply here.