Licensed User
Longtime User
I am a newbie to B4A. When I open a project I get a popup error: An error occurred. The system cannot find the file specified. The same error occurs when I try Tools -> Run AVD Manager. I am running B4A 4.0 and have installed the Android SDK. AVD Manager works when run from Windows -> Start -> All Programs -> Android SDK Tools - AVD Manager.
Screenshot:

Licensed User
Longtime User
Had to run B4A as administrator. Our IT department are security crazies.
Upvote 0

Licensed User
Longtime User
Thank you for the quick reply, but the Android SDK is installed in C:\Android. Only the android the android.jar file was in Program Files. I have moved the file to C:\
Android\Android.jar\android.jar and will get the same problems.
Upvote 0

Licensed User
Longtime User
I uninstalled everything, JDK, Android SDK and B4A.
Running As Administrator I did the following:
1) Installed JDK 7 for x86
2) Installed Android SDK in C:\Android
3) Installed B4A

When I use Tools -> Run AVD Manager I get the error: An error occurred. The system cannot find the file specified.

I have attached a screenshot of my Configuration Paths.

Then when I attempt to the Emulator I get this error: 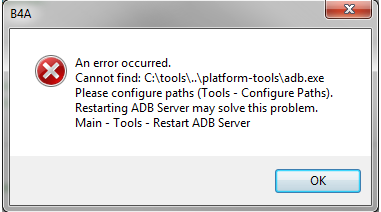 Then when I restart the ADB Server I get the following error:

What am I doing wrong?

Thanks in advance.
Upvote 0
J

Licensed User
Longtime User
Your android.jar path looks wrong. On my system, it is C:\Android\android-sdk\platforms\android-21\android.jar. Also make sure that you install at least one platform. Run the SDK manager and select one to install. In my case, it was android 5.0(API 21). You would need to point the path to the API level you wish to compile with, for example, if you installed Android 4.2.2(API 17), you would point the path to C:\Android\android-sdk\platforms\android-17\android.jar.

Also, the Additional Libraries and Shared Modules paths shouldn't be pointing into the SDK folder. You should set up separate folders for that. If you want to keep everything together, you could set up C:\Android\Libraries and C:\Android\SharedModules. On my system, I just set up folders under Users folder, C:Users\username\B4A\Libraries
Upvote 0

Thank you to all those who helped out.
Upvote 0
You must log in or register to reply here.