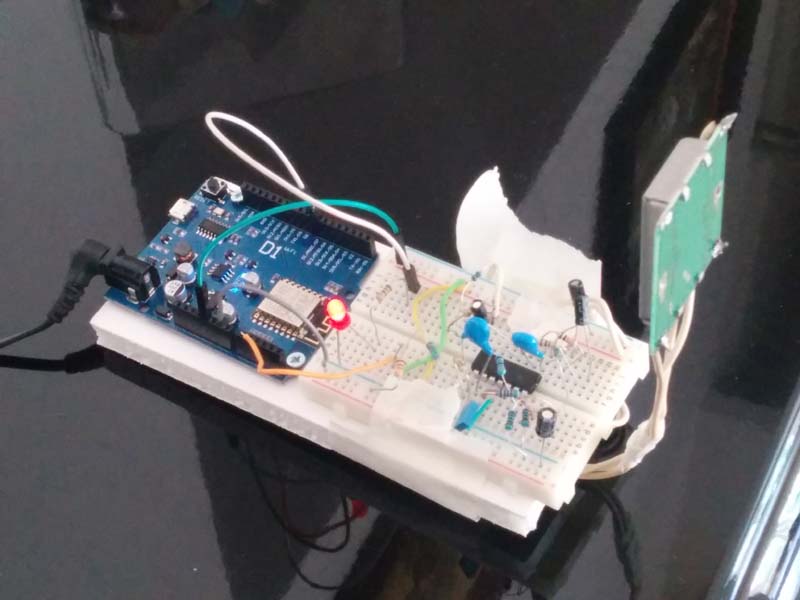 This is a Doppler RF transmitter and receiver which can be used as a movement alert.
You can read about it here http://www.theorycircuit.com/hb100-microwave-motion-sensor-interfacing-arduino/
I have made the electrical circuit described there to amplify the signal, added a voltage level converter (2 resistors of 5 kohm and 10kohm) to connect it to WEMOS (which connects to a server).
I connected the output to A0 pin.

I tried first to use the sketch but it didn't work for me... so I wrote a little sub to measure the output.
It is all experimental and probably needs calibration due to many variations in the complete device.
The sensors output is not a steady voltage but some kind of waveform so I made the following:
1. Measure the mean value of the output.
2. Measure some sample of the frequency by counting every time that the value is above mean and the next value is below. I got a count of about 50-60 for a loop of 10000.
3. The counted sample drops meaningfully when a movement is detected (both directions), so I have defined a number as a lower limit to define as detection.

Notes:
1. The antenna's face is the flat side of the sensor.
2. The measured values are affected by the power supply's voltage and the position of the sensor so you need to define the values in the intended location and with the final power supply.
3. The attached code is partial for the sensor's part only.

Licensed User
Using B4j Serial Connector and drawing the output signal on canvas I got this graph, showing area of detection and no detection.
The results are drawn every 80 msec so it is just a sample.
Accordingly I changed the criteria for alert to getting a reading under value of 40: 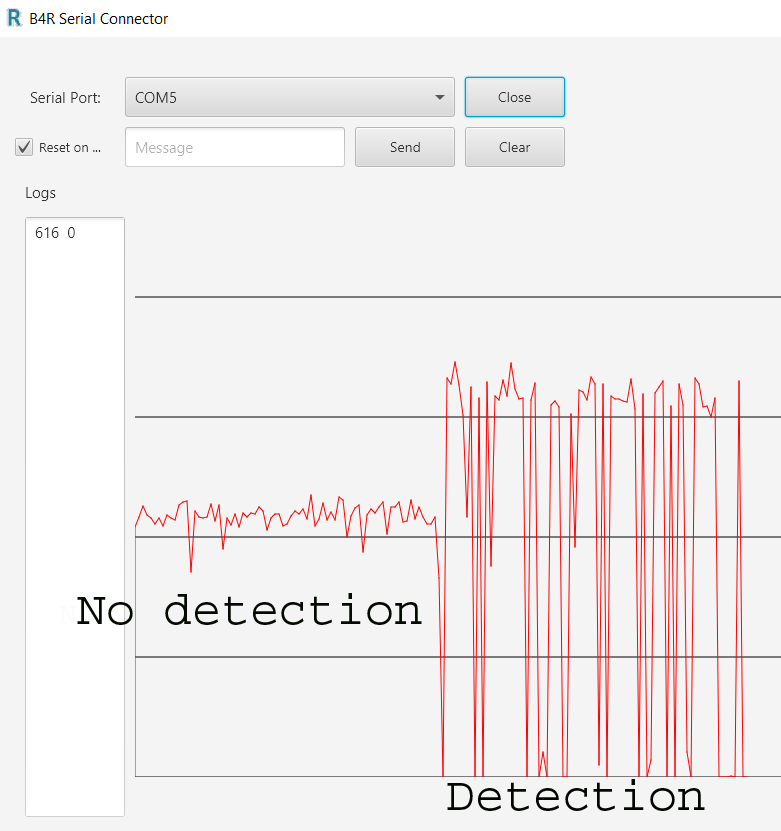 Staff member
Licensed User
Great usage of B4J Serial Connector. This was exactly the reason for implementing it.
[B4X] Features that Erel recommends to avoid
[B4X] "Code Smells" - common mistakes and other tips

Licensed User
for testing just use a voice recorder... you got the perfect cucumber and can difference noise, expecially from Handy net.
loudness depends on distance, frequency (10 to 30 hz) depends on speed - together approaching and disapproaching

you can split the signal with a schottky an fill an 10microFarad capacitor with 1MOhm leak to ground. Its better then, to take maxValues at A0, to find patterns, that could alarm you over VPN and let you check your cam....


B4X:
... for more range try an low pass, followed by a smith trigger,

Very fine: the ELV SMV5 (10€) has a trimmable noise reduction. With this trimmer, you can can directly trim the sensivity of the sensor - up to 5m and more im my case and 3m behind a wooden brick of 6 cm)))))