Hi everyone, what's your sneaky plan?

Licensed User
Longtime User
You know that BTInterface app that I made?

It allows you to control things over a bluetooth link... hence BT ... Interface

Well I used an Arduino as an example thing that could be controlled and now I have a brand new job and on my desk I have at least three Arduinos and a bunch of other stuff and I'm programming incredible devices and all really because of B4a.

Its touch and go... I have a long probation period that I have to get through before I can really say that I work there, they demand a lot so I have to do things like, stop drinking beer! Imagine that!

Up one moment and down the next

Well, I'm into my second month there, Erel gave me a copy of B4a 4 bless him, because I'm so poor.

My sneaky plan is to save up enough for an iPhone and iPad then make stuff that controls microcontrollers on everyone's phones and tablets!

I'll let you know how it goes.

Licensed User
Longtime User
Congratulation on the new job Ian, you'll breeze past the probation period.
So are you using B4A at work, I'm only asking because of what you said in the following line?

I'm programming incredible devices and all really because of B4a
Click to expand...

Licensed User
Longtime User
I really love B4a, what Erel has done for us is just amazing

I'm taking my firsts steps in the hardware and micro controllers world with the IOIO board.
Since I figured out how to connect through Bluetooth and interface "real electronics" I starting to plan my "iHome" and even maybe an "iCaravan"!

Licensed User
Longtime User
My plan is to take over the world Pinky...

First I must take down the evil Google autobot and stop them from their march to world domination!

Licensed User
Longtime User
The best for you and your new job.

Hope this hint may help:
I have worked much with Atmel AVR, the chips in most Arduino. I like to use CodeVisionAVR C, it uploads using standard bootloader. The C is more efficient, so low level tasks are readily possible. Real-time programming becomes easy.

When I found B4A, I thought of it as the Code Vision for Android. While completely different, they are both great programming tools. Both are easy to use, allowing one to express creativity, without compiler problems.
Last edited: Feb 6, 2015

Licensed User
Longtime User
it will help, when I understand what you just said 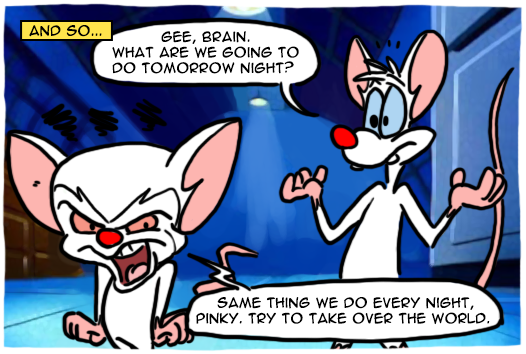