How do you mainly develop and debug your apps?

Licensed User
Longtime User
I'm just curious to know how other developer create their apps. I see a lot of screen shots in posts where developers show a print screen and in the corner hiding away is the Android emulator. I just can't see how anybody can use the emulator when you have the B4A-Bridge and USB debugging to help speed development up.

I used to always use the B4A-Bridge, but as of late I've been forced to rely more and more on USB debugging. This is mainly because B4A does not always connect to the B4A-Bridge(on my devices) and instead of messing about for 20-30 seconds, it's just become easier to plug a lead in.

Licensed User
Longtime User
Mainly I use USB debugging. It's the simplest to use. Just plug in the device and you are ready to go.

In the development process I use my main devices (N5 + N7 both with Lollipop). For last tests before a release I use an emulator to check if the app runs ok on older android versions.
You like my libraries and tutorials? Please make a donation

Licensed User
Longtime User
The bridge was good but i moved to USB debug as it was faster (no install screen) and i use logs a lot. But i might move to genymotion as that is even faster.
☢ My Apps | My Wiki | My Blog
Try out these libraries: MSMaterialDialogs MSDynamicGridView VideoConferencing MSCardView and many more...

Licensed User
Longtime User
For me I connect to Genymotion which is like having an Android device on your desktop. It's almost as fast as a native device.
Once most of the code and design is in place I switch to a real Android device (via USB).

Licensed User
Longtime User
I use my 2, older, devices (Xoom and EVO 4G) to start then Genymotion for some of the newer variants.

Licensed User
Longtime User
I test my apps/games mainly on my tablet and then on my phone. I rarely use emulators.
I don't use any kind of debugging, I make corrections to my code by trial and error.

Sometimes I try to run the program on paper, by reading the code out loud, taking notes and using an old fashioned calculator.
I know it's kinda weird but it works for me.

Licensed User
Longtime User
B + C are Necessary, for me.

To test the graphic, the emulators are indispensable.
For other types of testing, USB
B4J Source code of lmSnippets Manager & lmPWsManager

Sure, you have dozen of real devices, rich man

Licensed User
Longtime User
I spend a LOT of time just thinking about an app before writing any code. I`ve got a few ideas always on the go. If I didn`t do this, my other thoughts would get lonely.

I use adbWiFi so I can keep my Nexus7 and ZTE Blade on charge. I can also pick up the device and walk around with it which is useful for using GPS, motion sensors etc.
My Apps : Android | iOS
MacPro 2 x 3.5ghz | MacBook Pro 15" 2.7ghz | MacMini 2.5ghz
Samsung S9 | Samsung Galaxy A Tab | iPhone SE | iPad Air | Junk

Licensed User
Longtime User
I use USB during development on a Samsung 7" tablet because it's faster and then WiFi towards the end to test on several other devices.

Peter Simpson said:
I just can't see how anybody can use the emulator when you have the B4A-Bridge and USB debugging to help speed development up.
Click to expand...

I completely agree and always recommend to avoid using the emulator.

Another related question... Who is still using the legacy debugger and why (assuming that you are running B4A v3.5+)?
[B4X] Features that Erel recommends to avoid
[B4X] "Code Smells" - common mistakes and other tips

Licensed User
Longtime User
I use the legacy debugger 99.999% of the time. I've tried the rapid debugger several times since it was introduced, I quickly return to the legacy debugger within a few minutes. One thing I definitely prefer is being able to hover over a variable when stopping at a breakpoint to see the value. I find that scrolling up and down and expanding the field to a examine a variable within the rapid debugger variable listing is annoying and sometimes it can be can be next to impossible to even locate the variable.

The rapid debugger seems to show more information for variables, but I find it much easier to use a log statement if I need more detailed information or if I need to implement a "watch" during execution.

The edit – download – execute cycle time is not a problem at all. Speeding that up is just not necessary.

Peter Simpson said:
I just can't see how anybody can use the emulator when you have the B4A-Bridge and USB debugging to help speed development up.
Click to expand...

Where do you test the screens?

Licensed User
Longtime User
For the material design tutorials I started using genymotion and just purchased the indi license (there is currently a 50% discount). I can really recommend it if you want to test on several different Android versions.
You like my libraries and tutorials? Please make a donation

Erel said:
Another related question... Who is still using the legacy debugger and why (assuming that you are running B4A v3.5+)?
Click to expand...

@canalrun I too prefer debugger(legacy) being able to hover over a variable when stopping at a breakpoint to see the value. I do understand that hovering over the variable automatically moves the global variables list at the bottom of the IDE in debug(rapid) to the selected variables value, but I personally like to see the value as i hover with the mouse cursor and not just flick my eyes down to the bottom of the screen. I know that you can receive more information by looking at the bottom of the screen, but I still personally wish that hovering over a variable in debug(rapid) would show information like it does in debug(legacy). Maybe I just need to get used to it and shut up

I personally use debug(legacy)99% of the time when developing an app, I will try to use debug(rapid) more after this post. When I add a new library I quickly test my app in release(obfuscated) then I flick back to debug(legacy) again. Why the flick to release (obfuscated)? Just habit I presume.

Anyway @Erel I personally would use debug(rapid) more if hover over a variable for information was implemented and if the debug(rapid) tool bar had Step-In, Step-Over and Step-Out buttons buttons like as mentioned in the following link
https://www.b4x.com/android/forum/threads/step-and-step-through-while-debugging.43164/#post-264899 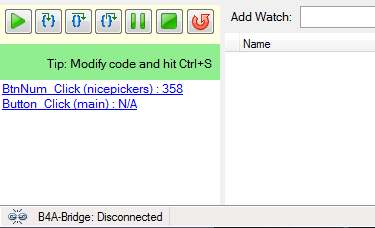 LucaMs said:
Where do you test the screens?

As a matter of fact @LucaMs I do(well did) have a number of different test devices of all screen sizes starting at Android 2.1, 3.2 all the way up to 5.0.1. Until 2 weeks ago I had 10 different devices, but I sold 4 on eBay in the last 2 weeks as I didn't really need all of them. I also stupidly broke one device last week during a housing change(a seriously stuck down screen broke), so I have to replace that one now

I'm a freak, I'm either always buying tech because I'm foolish, building car engines, photographing nature(specialising in macro photography), cycling or flying my 450 sized heli's. But tech wise I spend way too much money on tech, way too much, but my customers pay for it all
Last edited: Dec 21, 2014
Simply Invoice