HttpUtils is made of a code module and a service module. These two modules make it very simple to download online resources and upload data.

A simple example of downloading a page and returning the page as string:

B4X:
First we configure the callback subs. Then we call HttpUtils.Download or HttpUtils.DownloadList. These calls submit a job request to HttpUtils.
A job is made of one or more links.
HttpUtils raises two types of events while processing a job. The UrlDone event is raised for each successful download with the downloaded url and the JobDone event is raised when the whole job finishes.
You cannot submit a new job while a current job is running (though a job can contain many links).

We have three ways to access a downloaded resource:
These three methods should only be called after the job is done or inside the UrlDone event sub (for that specific Url).
After downloading a resource the Url serves as the key for that resource.

Inside JobDone event sub you should call HttpUtils.IsSuccess before accessing any Url as it is possible that some or all of the downloads have failed. This is not necessary in UrlDone event as UrlDone is called for each successful download.

Second example:
In this example we first download an image and set it as the activity background. Then we download another 6 Urls and print the last one as string. The code for this example is attached.

B4X:
What happens when the user presses on the Home key during a download?
The download will complete successfully (we are using a service for this).
However your activity will be paused and the UrlDone and JobDone events will not fire.

When our activity is resumed we should check if we missed anything. This is done with this code:

B4X:
We are calling JobDone ourselves if needed.
In Sub JobDone we reset the Complete flag so we know that this job was handled.
UrlDone event should be considered a "nice to have" feature. Your code should be prepared to handle the case where some UrlDone events were missed due to the activity being paused.

The FlickrViewer example was rewritten and the attached code uses this module.
In this example we first go to the "main" page. In this page we find 9 links to 9 images. We submit a second job with all these links.

We show each image as soon as it is ready by using the UrlDone event.
In JobDone we check if all Urls were handled. We can miss some of these events if the activity was paused during download. 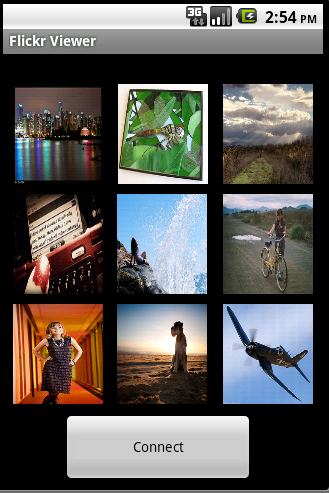 HttpUtils, similar to DBUtils, aims to simplify common tasks that many developers face. The code is available for you. So changes can be made as needed.

V1.04 - The service is now destroyed when it is no longer needed and recreated when needed again. This version also fixes a bug that caused the application to crash if the service was started after the process was killed.

V1.02 - PostString, PostBytes and PostFile methods added to HttpUtils.
These methods make it easy to post data to a web service (using http POST method).
The behavior of these methods is similar to Download and DownloadList. JobDone event is raised after the response from the server is read.

The latest version (v1.04) is included in HttpUtilsExample.

Just been playing around with the httpclient.

Thanks for this
Hey..?! It compiles! Ship it!
I

Does this mean even if I send a relatively large list of urls (say 50) to HttpUtils, it will handle the queue correctly and download completely while avoiding RejectedExecutionException completely?

Does this mean even if I send a relatively large list of urls (say 50) to HttpUtils, it will handle the queue correctly and download completely while avoiding RejectedExecutionException completely?
Click to expand...

Licensed User
Longtime User
I get an error with this:

Debugger finds it in HttpUtilsService at

For what it's worth, I got it to run last night on a different emulator, but when I tried to modify the url to a different page, I got an array out of bounds error (I think, I'm going by memory).
C

Licensed User
Longtime User
I am confused, is this a library?
V

No, these are modules, which include some kind of helper-functions. You can add them to your project with: "Project --> Add existing module" and use it, like Erel has described it in his example
Hey..?! It compiles! Ship it!

I get an error with this:

Debugger finds it in HttpUtilsService at

This can happen if the image file is corrupted or it is not an image file at all. It can also happen when you try to load a large bitmap and there is not enough memory.
[B4X] Features that Erel recommends to avoid
[B4X] "Code Smells" - common mistakes and other tips
C

An error has occured in sub: httputils_issuccess (java line: 113)
java.lang.RuntimeException: Object should first be initialized (Map)

This stops an error when the URL has a space in it.

Together with the AdvancedCamera stuff that would make a cool combination.

Staff member
Licensed User
Longtime User
For now you can use the Http multipart post code module: http://www.basic4ppc.com/forum/basi...als/8411-android-http-multipart-requests.html to create such a POST request.
[B4X] Features that Erel recommends to avoid
[B4X] "Code Smells" - common mistakes and other tips
B

Licensed User
Longtime User
Ok, will try to get this into the httputils myself.
R

Can anyone suggest me where I can download Http Library,,

I checked this link http://www.basic4ppc.com/forum/addit...icial-updates/

Staff member
Licensed User
Longtime User
The latest version is already included in the IDE (go to the Libraries tab at the right pane).

Licensed User
Longtime User
I use result=HttpUtils.GetString(loginurl)
and my result is chinese, so result is can't readble.
when I use old response.GetString("UTF8"), it works ok.
can you check it?

You should use HttpUtils.GetInputStream together with a TextReader that is initialized with the correct encoding.
[B4X] Features that Erel recommends to avoid
[B4X] "Code Smells" - common mistakes and other tips