OpenCV (Open Source Computer Vision Library) is a library of programming functions mainly aimed at real-time computer vision. Originally developed by Intel, it was later supported by Willow Garage then Itseez (which was later acquired by Intel).

OpenCV can be divided in modules, which group related functionalities. Each module contains several classes. The main modules (which many of the others use as building blocks), are Core, imgProc, .... They provide the 'primitive' objects and algorithms on top of which more complex algorithms are build.

Some of these modules that are platform dependant: for instance, Highgui and Videocapture are for desktop builds, android JavaCameraView for Android, and others.

There is another classification of modules: main modules (those that are in the main repository) and contrib modules. Contrib modules are those that for several reasons (not mature enough yet, or other...) are not part of the main repository, but most of them are also actively maintained, so they are suitable for development.
There's also a subgroup of the contrib modules: the non-free modules (usually their name starts with 'x'), which adhere to a totally different license if you want to work with them.


jOpenCV is a B4J library that wraps a customized OpenCV 3.x build for Windows x64, with additional FFmpeg support and some other add-ons, trying to keep the OpenCV Java syntax, adapted to B4J in order to ease the learning process.

Where to start / How to learn
Some notes / tips from my experience.

Worth reading if you have already used B4A OpenCV 3.x library

If you have already used my OpenCV 3.x for B4A library wrapper, you'll notice that syntax is almost the same. But there are some slight differences due to the platform change (Android <-> Windows) and also to the fact that they wrap different OpenCV versions.
Differences to take into account: 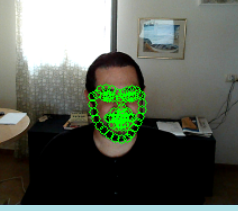 LOL, it correctly detected your face landmarks! It works strangely with my face, detecting always a mouth where in fact I have my nose...so perhaps the problem is not the library but my face

JordiCP said:
LOL, it correctly detected your face landmarks! It works strangely with my face, detecting always a mouth where in fact I have my nose...so perhaps the problem is not the library but my face
Click to expand...

Licensed User
can this library be used for face cmparison?

liulifeng77 said:
can this library be used for face cmparison?
Click to expand...

It can certainly do face detection and landmarks extraction using the face module. There's an example using it.

Comparing faces is more difficult. You could get face landmarks from several pictures of each one of the faces to compare, somehow normalize them, and train a ML model with them.
No idea about how good the results would be, never tried it.
L

Licensed User
thank you for your quick reply.I don't know much about training models. I'm a amateur.

liulifeng77 said:
thank you for your quick reply.I don't know much about training models. I'm a amateur.
Click to expand...

There are not out-of the box solutions for most computer vision problems, they need to be implemented

If you are interested to dive into the building blocks to be able to write such solutions, there are really good tutorials in nearly every programming language for it. Translating to B4J is the least difficult part.

i'm streaming six ip cameras into a program i'm working on. other programs can do this without jitters but my program can't. the security camera's display the current time. i can see the seconds going by, but its alittle to slow. then suddenly the camera jumps forward 4 or 5 seconds. i think the problem is that the program is reading the oldest frame in the buffer. i read about a way to declare the buffer size. they say it works from opencv 3.4 and up. i beleive i'm supposed to use it in the mvideocapture.set command. the proid i'm supposed to use is CAP_PROP_BUFFERSIZE. so the command is supposed to be something like this mvideocapture.set(CAP_PROP_BUFFERSIZE,1) . if that works then there should be only 1 frame in the buffer. CAP_PROP_BUFFERSIZE doesn't work, i don't think that constant name is quite right for jopencv, so i found what number thats constant stand for. 38. so my command is: mvideocapture.set(38,1). when i try that i get no errors. but nothing got better. if i try mvideocapture.get(38) the return value is zero. can you help me with the set and get commands ??

will check the BFMatcher and release the lib when done
You must log in or register to reply here.