This is an interface library to help with managing CellFactories for ListView and TableViews.

The principle job of a cell factory is to display data into a cell. The standard ListView and TableViews use a default CellFactory. With this interface, you can create a custom cellfactory and change the appearance of the cells within a ListView and columns within a TableView.

The Library is in two parts, a Java Library that manages the callback required for the ListView to display the data as configured by the cell factory. And a B4j class that allows manipulation of the cell factory.


B4X:
It's parameters are a Type, either Text or Graphic(which is a bit of a misnomer as it is actually a Node that can hold other objects), an ID for use within the CellObject Class and the ListView or TableView Column that will hold the CellFactoryObjects.

Then, rather than adding our data directly into a List or Column, we need to create a CellObject for all of the items in a list or column that we want to manage. The CellObject will create and initialize a CellFactoryObject which is the object that needs to be added to the ListView or Column and can be obtained by calling the CellFactoryObject method of the CellObject:


B4X:
Then we can write the code within the CellObject class that will determine how the data is displayed.

There are currently 4 examples attached to this post, I plan at least one more on utilizing Drag and Drop.

The Simple Text example allows a firstname and lastname field to be reversed, and contains a numeric score which triggers a Style to color the cell if the score is >= 90.

The Simple Graphic example does the same, but the Score is in a separate label and so appears aligned.

The Graphic Object Example manages two lists with one CellObject (I could have written two separate classes) And shows or hides a button on each of the lists.

The TableView Editable Example uses an editable TextField and a hideable button in one column.


Download and unzip the Library Jar and Xml files in jCellFactoryHelper.zip to your Addl Libs directory.


I hope it all makes sense. By its nature, it is not particularly simple but I hope you can make use of it.

Licensed User
Longtime User
Updated TableViewEditable Example to fix a problem where fast scrolling of a TableView can create a transient additional row at the end of the table, causing the data update process to fail.
If you profit from my contributions or just find them useful feel free to:

Licensed User
Longtime User
Steve - thank you for this.

Did you ever get around to do the example with Drag and Drop? Would like to use the TableView where the user could drag a row into a new position (down or up)..
If you like or have benefited from my work, please consider a donation. Thank you.

I get a blank listview and tableview.... 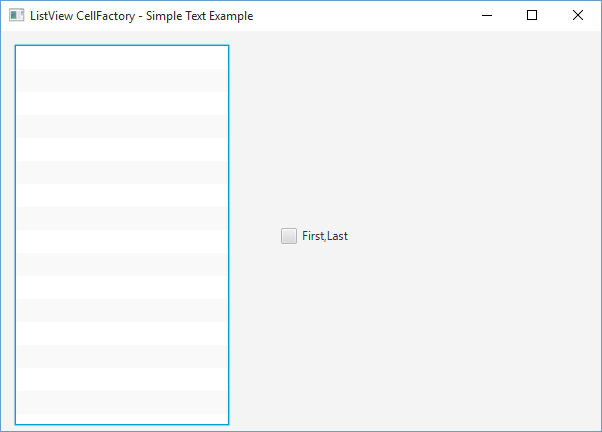 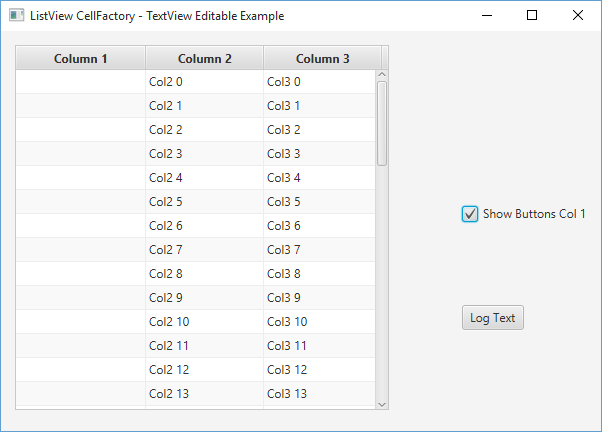 I tried the Graphics and it received an error...

Licensed User
Longtime User
@moster67 Sorry I missed your post, I've not been around much this summer, I should get some time next week to review. I'll make a note to look at it.
@tcdocs I will have a look next week, not going to be able to this week, sorry.
Last edited: Aug 13, 2015
If you profit from my contributions or just find them useful feel free to:

Licensed User
Longtime User
Hi @tdocs2 I downloaded the GraphicsObjectExample and it runs as is on Win10. Are you running the demo project? Can you post your project if not.
If you profit from my contributions or just find them useful feel free to:

Licensed User
Longtime User
Hi @moster67 I've had a look at the project, I did some work on it but it's not ready to release yet, I changed the way the library works which is incompatible with the released version so I can't just release it as is. I'll get to work on finishing it as you have a need for the functionality.
If you profit from my contributions or just find them useful feel free to:

Licensed User
I'm getting an error that TVCellFactoryHelper is an unknown type.

Is there a particular library I need to load for this?

Licensed User
Longtime User
The library is in the file jcellfactoryhelper.zip in the first post
If you profit from my contributions or just find them useful feel free to:

Licensed User
Got it, thank you. Will give it a shot.
H

Licensed User
will this work on Web App too?

You can see an example of a WebApp table here: https://b4x.com:51041/dbutils/index.html (the code is available here: https://www.b4x.com/android/forum/threads/39811/#content)
[B4X] Features that Erel recommends to avoid
[B4X] "Code Smells" - common mistakes and other tips
You must log in or register to reply here.

B4J Question Question about editing cells in a TableView