Note: You should use B4A 6.0 or above for this tutorial.

With this tutorial series I will introduce some of the Material Design guidelines and explain some differences to the Holo Design.

For a good start it will be helpful if you know what material design is so it is a good idea to spend some time to study the first few chapters of the official Google "Material Design" guidelines.

Important:
Because we use features of the SDK version 21 you have to configure the correct android.jar in the Configure Paths dialog of the IDE. Set the path for android.jar to at least <Your_Android_SDK_HOME>\platforms\android-21\android.jar. You should always use the latest android.jar that is available like android-24/android.jar. Don't worry. Your app will run on older Android versions, too.

Android always uses a theme for the UI. The default theme of an app depends on the installed OS version and the targetSdkVersion specified in the manifest of the app.
I would have expected Holo theme until targetSdkVersion is set to 21 or above but that is not the case.
Therefore it is a good idea to explicitly set a Holo theme if your current app does not really support Material Design. There are some changes in Material Design theme that will probably break your app.
Be aware that setting targetSdkVersion affects the default theme. You can explicitly set another theme in the manifest if you want.

Best practice is to set targetSdkVersion to the highest OS version number your app should support and it has been tested on. So for our example app we set it to 21.
The minSdkVersion has to be set to the lowest OS version number the app should support. Since our app will use the ActionBar and the StdActionBar library this will be OS version 11 (Honeycomb). So we have to change the following line in the Manifest Editor:


B4X:
This will enable the default dark Material theme on Android 5.0 Lollipop devices.

Using our own Theme

So if we set these three attributes we can change the whole appearance of our app. Note that the colors defined here are also used in the systems task manager on Lollipop devices.

The material design guidelines gives some hints of what colors should be used in an app. Please study these pages about colors for further information.

Now we have to set our custom theme in the Manifest Editor:


B4X:
Ok, now we have set the theme for Android Lollipop (5.0) devices. But what about the other versions like Jelly Bean (4.x) or KitKat (4.4)?
We simply add a theme that sets the Holo theme for the app. So we add the following lines to the Manifest editor:


B4X:
So we have now set Material theme on Lollipop (and higher) devices and Holo theme on lower Android versions.

Differences between Holo and Material Design

So what are the main differences between the Holo theme and Material theme?
Here are some screenshots of the example app with the differences. In addition to some visual enhancements there are some very important changes: 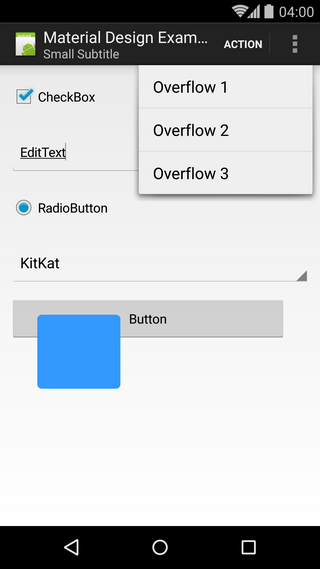 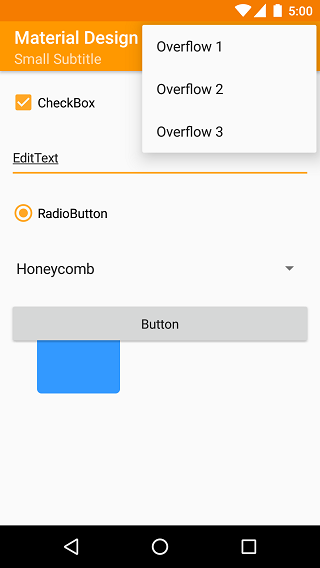 I hope this tutorial gives you a good start to Material Design. In the next tutorial I will explain how to use the AppCompat support library to create Material Design apps even for pre Lollipop devices.

Licensed User
Longtime User
Library works fine! I uploaded Selfie Light app and shadows works great. Here on another project, nor actionbar nor panel has shadow even if i set it:

B4X:
Do you know why it does not show shadow?

Licensed User
Longtime User
SetElevation only works for Android 5.0 or above (works in older versions, too but without shadow effect). The screenshot you have posted does not look like Android 5.x
You like my libraries and tutorials? Please make a donation

Licensed User
Longtime User
Thank you for the answer. I want to inform you that, my app tested on samsung galaxy s5 running lollipop. As you can see at screenshot, it is lollipop, see dark orange bar at top.
Driving License Car(aka Δίπλωμα Αυτοκινήτου) // 100.000+ Downloads // No.1 At Education (Greece) // 4.5/5 Rating

yiankos1 said:
Thank you for the answer. I want to inform you that, my app tested on samsung galaxy s5 running lollipop. As you can see at screenshot, it is lollipop, see dark orange bar at top.
Click to expand...

Ok, then without a sample project which shows this problem I can't guess whats the problem is.
You like my libraries and tutorials? Please make a donation

Licensed User
Longtime User
You should write ENGLISH here please.
Alternatively you can create a thread in the spanish forum and ask there
Anyway: It is better to create a new Thread in the Questionsforum giving more details. Your code, the error you get.

I´m just guessing as i dont speak spanish so i did not understand what you wrote.
Regards Manfred

If you find my answer useful please click on like. You can even Donate with PayPal
Multipart Fileupload b4A->PHP | Create PDF | Create dynamic JPG | My Libraries (Overview)
R

Licensed User
Longtime User
I'm starting now with material design and i having some problems.
This is the error when in try to compile 'AppCompactSearch' example:

Licensed User
Longtime User
Great stuff, I just created my first Android 5+ app and was wondering how to do color-theme stuff. Many thanks for this tutorial.

Related: Is there a property for setting the text in system dialogs (like MsgBox) when they're invoked from my app?

(My app now uses red elements by applying the color properties you described above, but if I open a MsgBox2, the button text is blue. Possible to have it match my color scheme, or does Android control that at a global level?)

Licensed User
Greetings all, ...
Very new to this. Went trough the tutorial and I have been successful generating my first app.

Now exploring the Material Design sample and I get this message during compilation:
Cannot find: C:\Program Files (x86)\Anywhere Software\Basic4android\libraries\android-support-v4.jar

Something is missing for sure as I get this "android-support-v4.jar" error message, ...

Thanks in advance
Stéphane
Z

hsteph said:
Greetings all, ...
Very new to this. Went trough the tutorial and I have been successful generating my first app.

Now exploring the Material Design sample and I get this message during compilation:
Cannot find: C:\Program Files (x86)\Anywhere Software\Basic4android\libraries\android-support-v4.jar

Something is missing for sure as I get this "android-support-v4.jar" error message, ...

Which B4A version do you use?
Are you using any additional libraries?

The latest B4A versions should map from the android-support-v4.jar to the Maven repository so the .jar file should not be needed anymore.
You like my libraries and tutorials? Please make a donation

Licensed User
Hi ZenWhick, I have no "android-support*.jar" files installed on my computer
Hi corwin42, I use B4A v6.5
The only additional library contains stdActionBar and it is stored here C:\Program Files (x86)\Anywhere Software\Basic4android\AddLib
H

Licensed User
Well, based on previous posts, I have tried to :
remove <dependsOn>android-support-v4</dependsOn> from stdActionbar.xml : => It works
replace with "com.android.support:support-v4" : => It works

So, what is the best practice? remove the line (less is more or with the 'com.android.support:support-v4' syntax in the xml file ?

Staff member
Licensed User
Longtime User
It is not needed to edit the XML file.

You can instead add this line:

B4X:
[B4X] Features that Erel recommends to avoid
[B4X] "Code Smells" - common mistakes and other tips
You must log in or register to reply here.