Licensed User
Longtime User
Is there something like OSM for B4J?
Sort by date Sort by votes

Licensed User
Longtime User
I've looked at a few java map viewers over tha past 2 days.
Most are old swing libraries which I'm not sure if they can be used in b4j.
I found 1 javafx map viewer, but it has zero documentation or reference so would need some time to work out how to use it.

I hope to create a b4j map viewer before the new year.

Licensed User
Longtime User
That would be great Martin, I used the OSM on Android.
Upvote 0

Licensed User
Longtime User
Martin. I don't know if you know, but the JFXtras library I used for jMsgboxes, jFXtrasControls and JFXtrasGauges has a MapPane object and what look like interfaces to Bing and OSM. These are all under jfxtras.labs.map. The javadoc is here in jfxtras-labs-2.2-r5-javadoc.jar

although it is pretty much devoid of comment, a problem I struggled with to understand the stuff that I have exposed.
If you have benefitted from my work

Licensed User
Longtime User
@agraham yes that's the one and only JavaFX map viewer that i have found.

There's the swing based OSM JMapViewer, but from what i have read it is no longer supported to add swing components to a JavaFX project.
Apparently the older versions of JavaFX had a SwingComponent Interface that could be implemented to convert a swing JComponent into a JavaFX component.
But with the current version of JavaFX that functionality has gone.

I've no experience of JavaFX or the JFXtras library but will do some research - as you said, documentation is rather non-existent .

Licensed User
Longtime User
@Philip Prins and anyone else following this thread.

I have developed a rather basic but functional B4J MapPane library, it's based on the jfxtras 2.2 r5 source. 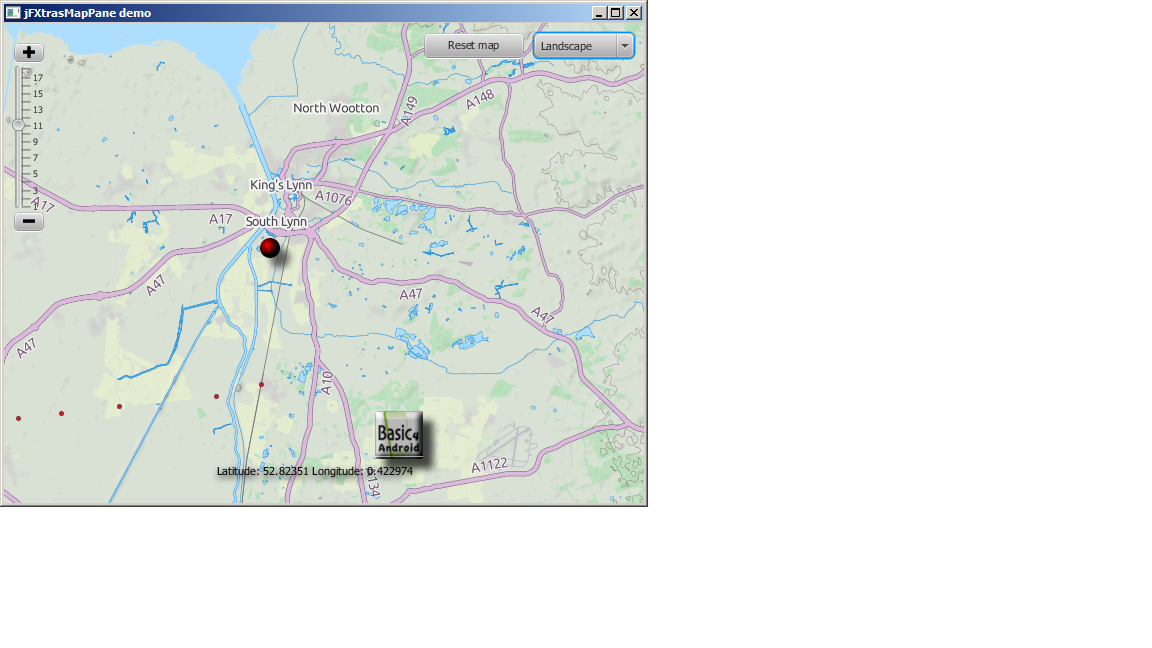 With a choice of Cyclemap, Landcsape, Mapnik and Transport tile sources and support for Markers and Marker Click event tested and working.
No info-window that pops up on a Marker click, and the map drag only occurs when the drag ends not while dragging.
So not perfect but with a little more work it should become a useable library.

Demo project and (alpha) library files attached will be found in my next posts.

Please let me have any bug reports and suggestions.
There's plenty left to wrap into the library and i'll give priority to wrapping features that interested members suggest.

Licensed User
Longtime User
Out of interest, why didn't you just reference the jfxtras 2.2 r5 jar which a lot of people are going to have anyway?
If you have benefitted from my work

agraham said:
Out of interest, why didn't you just reference the jfxtras 2.2 r5 jar which a lot of people are going to have anyway?
Click to expand...

That did cross my mind just after i posted - but i have actually modified just one class so really need the modified source.
I can probably extend the class that i have modified and then reference the external jfxtras 2.2 r5 library - i'll look at that later.

Licensed User
Longtime User
Here's an update, i've done as agraham suggested and referenced the external file jfxtras-labs-2.2-r5.jar instead of compiling the classes from that external file into the jFXtrasMapPane.jar file.

Hope that all makes sense!

Licensed User
Longtime User
Here i have another update for you all.

The MapPane GetMapMarkerList method is now working and returns an array of MapMarkable objects.
More interesting though is support for custom tile servers and offline tiles.

The updated library files and both demo projects are attached.

Licensed User
Longtime User
Another update, bug-fix and demo for you all.

The library is slowly maturing and once i think it's bug free i shall start a new thread and 'properly' upload it.

I've been thinking about how to display a balloon (infowindow) when a marker is clicked.
The big problem was that by referencing the MapPane source code in jfxtras-labs-2.2-r5.jar i couldn't get access to various classes and methods.

The MapNodeHost is used to anchor any Node to a geographical position on the map, the Node's position will be updated when the map is panned or zoomed.
In the attached demo i anchor a hidden Label to the map, when a marker is clicked the Label's position is updated to match the clicked marker, it's Text property is updated and it is made visible.
A click on the Label hides it.

So we have a very basic balloon/infowindow.

I did a quick test anchoring a WebView to the map and that worked as expected, i haven't tested other types of Nodes yet but they should all work.
So with a little imagination i think the MapHostNode can be used to create whatever style of balloon you want.
You could also use it to simply anchor Labels to the map with info related to a geographical position.

Take a look at the attached demo.
Pan the map so that a marker is close to either of the map's four corners and click the marker - the Node will always be positioned so that it is wholly visible.

Licensed User
Longtime User
Is anyone still using or interested in using the MapPane?
There's been very little feedback in this thread.
I was gonna upload the library to it's own thread - thinking it was ready for a proper release.
But i think the library is still only beta quality at best so i'll upload the latest update to this thread.

The MapNodeHost now has a method SetAutoFix (AutoFix As Boolean) which determines whether the MapNodeHost will auto adjust it's position to keep itself wholly displayed on the map.

That sums up the main changes, the library is now at version 0.09 and is attached with a demo project that shows how to turn a mouse click into a latitude, longitude Coordinate.
Also attached in an updated jCoreExtras.

All and any feedback welcomed!

I am following the thread but waiting for the library release ..
Upvote 0
J

So dont give up!

I have a question:

I got a database table with coordinates.

I want to loop thru some selected number of rows and plot the
coordinates on the map. And each (ploted)marker should be identified for a click event (and maybe a label).

Do you have some sample or maybe some pointers.

I've just removed all the old demo projects from this thread as they'd no longer compile with the current version of the library.

Attached is a new demo that will compile with the current version of the library.
It shows how to add 'SimpleMapMarkers' and 'ImageMapMarkers' to the map and how to detect clicks on them.
It also shows how you can use the MapNodeHost to anchor a label to a clicked marker and display related info.

I've just removed all the old demo projects from this thread as they'd no longer compile with the current version of the library.

Attached is a new demo that will compile with the current version of the library.
It shows how to add 'SimpleMapMarkers' and 'ImageMapMarkers' to the map and how to detect clicks on them.
It also shows how you can use the MapNodeHost to anchor a label to a clicked marker and display related info.