Has anyone got any Paid Android apps that they made using B4A on Google Play?

If so, have you tried to generate a promo code lately using the Google Play Console (using the new developer console) ?

When I create a promo code (Paid app Promo code, not in-app or subscription) it come up saying: "Make sure that you’ve integrated your app with the Google Play Billing library."

I then try and redeem the code but it shows an error and doesn't let me redeem the code. (created a new Google account for testing, so it doesn't use my developer account)

My app has no in-app purchases or subscriptions, and only a one off payment to download the app from Google Play.

Does this mean I now need to add the billing lib even if I don't plan to use in-app purchases or subscriptions if I want to give out promo codes for the customer to download the app without having to pay for it ?

I rolled back to the older developer console and generated a promo code and it doesn't say "Make sure that you've integrated..." message, and when I redeem the code it works.

I am wondering if this is happening for others as well, or if it's a bug in the new Google Play developer console ?
Sort by date Sort by votes

aaronk said:
Has anyone got any Paid Android apps that they made using B4A on Google Play?
Click to expand...

There are many paid apps in Google Play made with B4A. You can go though the "share your creations" list to find some of them.


aaronk said:
I then try and redeem the code but it shows an error
Click to expand...

When I try and redeem the code it comes up with the error: "That code didn't work. Try again. If the code is for a specific app, redeem it in that app." 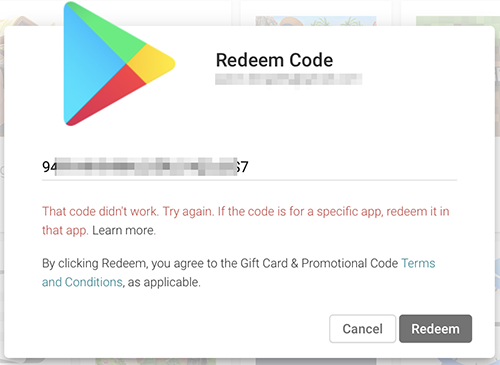 They should be used in apps that offer in app purchases.
[B4X] Features that Erel recommends to avoid
[B4X] "Code Smells" - common mistakes and other tips
Upvote 0

They should be used in apps that offer in app purchases.
Click to expand...

I now noticed on the service overview screen, it shows 'Scheduled' rather than 'Live', and this is most likely why my promo code didn't work.

Staff member
Licensed User
I see. I guess that the "paid app" option has nothing to do with the billing library.
[B4X] Features that Erel recommends to avoid
[B4X] "Code Smells" - common mistakes and other tips
Upvote 0

Erel said:
I guess that the "paid app" option has nothing to do with the billing library.
Click to expand...

Correct, looks like that is the case. Google just made it confusing.
Upvote 0
You must log in or register to reply here.

Android Question Is any special coding needed to use in-app Promo Codes (NOT for subscriptions)?