Staff member
Licensed User
The next version will include a new feature named "designer scripts".

This is really a new feature. I'm not familiar with any IDE (Visual Studio, Eclipse, etc...) that includes such a feature.

The idea is to create the "rough" layout with the visual designer and then add the "fine tunings" with the more powerful and flexible script code.

The script engine is quite simple however it well serves its purpose to allow you to easily adjust the layout.

The abstract designer together with the scripts engine allow you to easily and quickly test your layout on different screens and resolutions.

Another advantage of this feature is better separation between the UI code / design and the logic code.

I will write more about this new feature before the release.

Just to demonstrate it, lets assume that we want to build a layout with an EditText and two buttons at the bottom of the screen. The buttons are attached to the right side and the EditText view fills the entire available width.

The first screenshot shows the "rough" layout on a Galaxy Nexus and the standard phone layout: 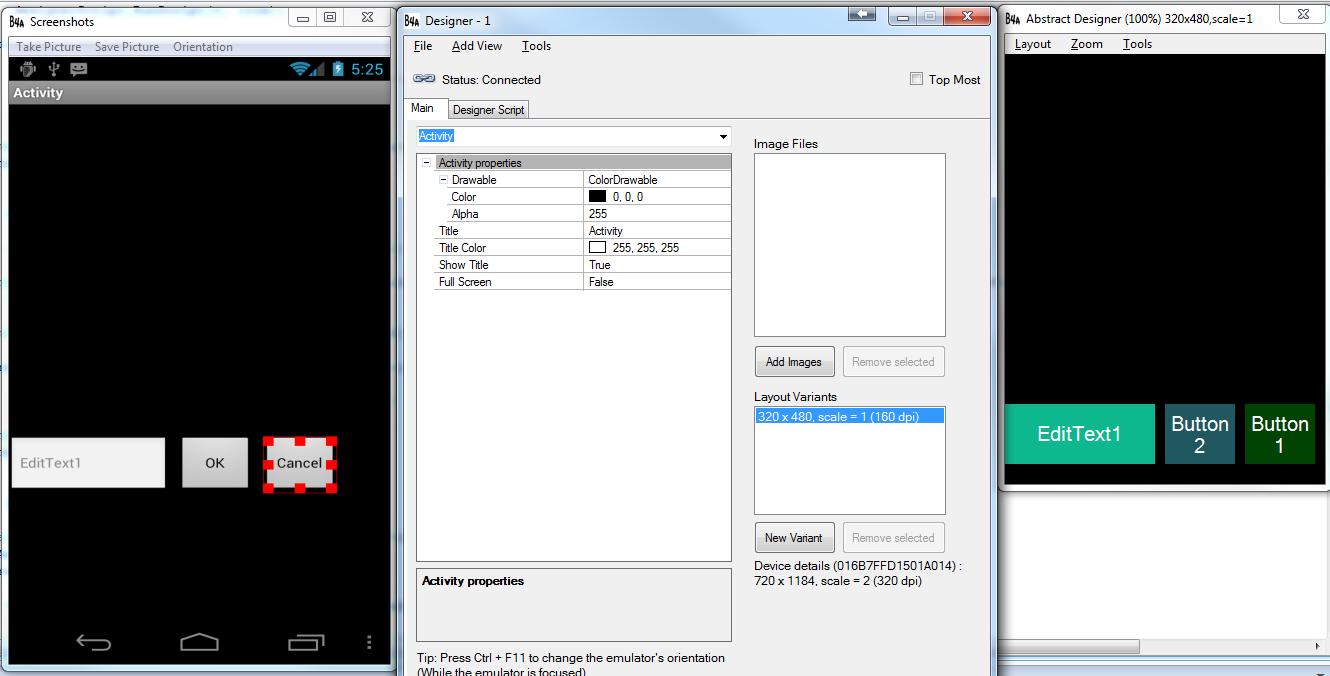 In the second screenshot the designer is in "script mode":

You can see that the views are now located in exactly the correct position. We can choose different layouts in the abstract designer and immediately see how our layout will look on other screens.
[B4X] Features that Erel recommends to avoid
[B4X] "Code Smells" - common mistakes and other tips
Sort by date Sort by votes

Licensed User
awsumm....thanks Erel.
Just a question, not related to the thread but regarding next release.
can you make B4A to support Mac OSX please?
Upvote 0
S

Licensed User
This is brilliant.
This is exactly how I code my layouts, but now I will be able to see the results immediately on different screen resolutions.
So now it is possible to anchor your views to any side.
Do you have something like Align, in which you set one view, and align the remaining views to the first one, for e.g. AlignLefts(View1, View2).
And also something to create a list of views going downwards for e.g.
SetTops(View1, View2, View3, Gap) so all views are placed with the same left/right alignments and their Tops are separated by a gap.
Regardless, this is already useful as I can remove all my GUI code from the activities.
☢ My Apps | My Wiki | My Blog
Try out these libraries: MSMaterialDialogs MSDynamicGridView VideoConferencing MSCardView and many more...
Upvote 0

Licensed User
Ingenious!! This is going to be very helpful.
www.CardSharkGames.info
Upvote 0

Do you have something like Align, in which you set one view, and align the remaining views to the first one, for e.g. AlignLefts(View1, View2).
Click to expand...

This can be done easily with:

SetTops(View1, View2, View3, Gap) so all views are placed with the same left/right alignments and their Tops are separated by a gap.
Click to expand...

This is an interesting idea.

can you make B4A to support Mac OSX please?
Click to expand...

It will not be in the next version. I do hope to eventually add support for Mac and Linux. However it more or less requires a full rewrite.
[B4X] Features that Erel recommends to avoid
[B4X] "Code Smells" - common mistakes and other tips
Upvote 0

Licensed User
You are right Erel. Infact the use of Right and Bottom will be very useful otherwise I always had to set the Left by

B4X:
Also, SetLeftAndRight is a godsend. You may want also SetTopAndBottom too.

I was just thinking out in VB6 terms, when I used to Align controls, or set the width/height by selecting them all, and from the menu: Make same Width, or Align Lefts. So it just helps in setting all the properties in one line.

I know Android probably doesnt expose Right and Bottom, but they could be helpful in building dynamic layouts during runtime as well.

okay...dont want to delay your release with more wishes

thanks!
☢ My Apps | My Wiki | My Blog
Try out these libraries: MSMaterialDialogs MSDynamicGridView VideoConferencing MSCardView and many more...
Upvote 0
M

Licensed User
Awesome! What happens with our current projects? will the scripts section just be empty or will the code transfer over?

Sent from my DROIDX
Upvote 0

Licensed User
It means that the new feather "designer scripts",It make our easily change size of application fit for vary size of device?

It make our easily change size of application fit for vary size of device?
Click to expand...

1. Is it possible to change other properties of views like the visibility? So it would be possible to hide some controls for smartphone size layouts an display them on tablets? This would be very nice.

2. I think this won't work with homescreen widgets. For better support of different screen sizes in widgets do you still have the first wish from this thread on your todo list? I think it shouldn't be too hard to implement.

And the most important question: When do you expect the first beta to be released.
Last edited: Mar 2, 2012
You like my libraries and tutorials? Please make a donation

Licensed User
In another threaad you said that you were also solving the Z-Order from another angle, and I think it was this feature:

Erel said:
Next version will include a new feature named "designer scripts". It actually tries to solve the same problem in an opposite way.

It will allow you to add (simple) code to the layout file. The advantage of this code is that you can immediately see the results in the abstract designer and WYSIWYG designer (emulator / device). You will not need to compile and install the application after each change.
Click to expand...

I do not see how this will solve the Z-Order issue? The code would appear to operate after the designed has added the views.

I am pretty new to Basic4Android. Is there a location that you publish projected release dates, and what you are planning to include in the next release?
Upvote 0
You must log in or register to reply here.