The bismarch didn't last too long, but what a battleship...

Licensed User
Longtime User
Named after the Chancellor Otto von Bismarck:
Yes I don't just like my mobster history, mainly the Irish and Italian Mafia (The Mob). But I also like my WWII battleship and submarine (U-Boat) history, and basically submarines full stop.

Oops, I forgot to mention that the German cruiser Prinz Eugen was also at that battle. Us Brits got torn to shreds during that battle. 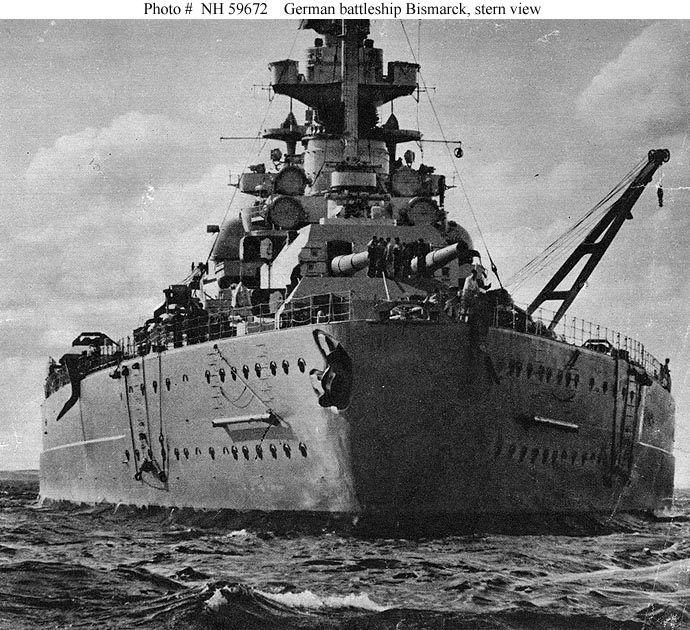 Licensed User
Longtime User
And probably would have lived through that engagement if a torpedo wouldn't have jammed her rudder.

--- Jem
You can lead a horse to water, but it takes a hell of a man to drown the damned thing.

The one fact that always get me thinking @HotShoe is this. Just under 40,000 submariner went out in U-boats during WW2, less than 10,000 made it back home to love ones.
German submariner were all given an aftershave called 4711 as standard to help with the small. I've got a bottle of 4711 here, trust me when I say that it smalls aweful
Last edited: Feb 13, 2015
Simply Invoice

Licensed User
Longtime User
As I understand the Hood had some design flaws. I mean 3 people survived the sinking. Something was wrong.
Prince of Wales still had teething issues and could not shoot her way out of a paper bag. LOL

What makes the Bismark interesting was the speed, she could run away from any other battleship of the day as well as slug it out and only the fast cruisers could catch her and then they caught hell. But my favorite is the Iowa class. Speed, firepower and a true fire-control radar.

If you really want to have fun with the big ships try Battlestations: Pacific on steam.
*** Chaos, Panic, Disorder, my work here is done ***
* Put your old tablet to work in your kitchen! Download Kitchen Essentials. Overview *​

Licensed User
Longtime User
The Hood went in for a full refit but didn't stay in dry dock long enough to get her paper thin upper deck refitted with thicker deck plating. She used to do a lot of diplomatic promotional work for the sovereignty before the war, thus never had the time.

The Prince of Wales was in fact not too bad of a ship. Don't forget the both British ships were charging at the German ships at the time and couldn't fire the side mounted guns until they turned to port, that maneuver just came that little bit too late for them.

The Prince of Wales did her fare share extremely well @JakeBullet70. I take it that you're an American. You do know that the Yamato was the world's most powerful and also the largest battleship ever built. I just love my WW2 information, interesting period of time, especially the German development curve.

You should look at the final journey of U-234, and what it's mission was.

Right it's time for a nice hot drink, anybody fancy a cup of tea
Last edited: Feb 13, 2015
Simply Invoice

Licensed User
Longtime User
Ah that was it. The upper deck armor and plunging fire. Ouch! And crossing the T. Every Admirals dream.

CaptainJohn Leach knew that main-battery breakdowns were likely to occur, since Vickers Armstrongs technicians had already corrected some that took place during training exercises in Scapa Flow. These technicians were personally requested by the captain to remain aboard. They did so and played an important role in the resulting action.[17]
In Prince of Wales, "A1" gun ceased fire after the first salvo due to a defect.[19] Sporadic breakdowns occurred until the decision to turn away was made and during the turn "Y" turret jammed.
Click to expand...

Good ship, don't get me wrong but it did have teething problems.

Yamato and Musashi was VERY powerful but had inferior fire control radar compared to the Americans. In the Battle of Leyte Gulf you really see that what difference that makes. In fact that's my favorite WW2 navel battle. But Air power ended it all in, no more big guns.

No worries @Peter Simpson I am just another WW2 fan!
*** Chaos, Panic, Disorder, my work here is done ***
* Put your old tablet to work in your kitchen! Download Kitchen Essentials. Overview *​

Licensed User
Longtime User
Because of the success of American Sniper - by the way, the movie and the book are about TWO COMPLETELY DIFFERENT people, one a Psychopathic killer in the book and the other a white-washed gentle giant in the movie - they are making this movie, to cash in:

Relating to this article, so I thought I'd post