Staff member
Licensed User
This is an example of a Tick-Tack-Toe game.
This game demonstrates two concepts. The first is an example of working with multiple views without duplicating code. In this case it is 9 buttons, however similar code can easily handle any number of views.
The second concept is the handling of Activity_Pause and Activity_Resume events to keep the game state during the activity life cycle.

The test it you just need to rotate the device. During the orientation change the activity is paused, created again and eventually resumed.
The game should continue from the previous state. 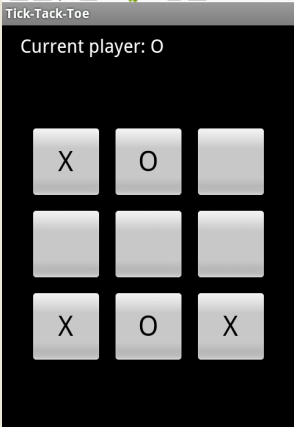 The following code creates the 9 buttons, puts each button in the correct place and stores a reference to this button in the Buttons array (two dimensions array):

B4X:
Later in Sub Button2_Click we find the button that raised the event with the help of Sender keyword:

B4X:
Note that the Buttons array cannot be declared as a process global variable. Only non-UI objects can be declared in Sub Process_Globals.

Licensed User
Who was pushed from an array stand point ?

Who was pushed from an array stand point ? I love
the generic approach using "b = Sender", but how
do you translate that info to which item in the array
was pushed ? Could you use "b.Tag" to store array
index info and how ?
Thanks, Jerry

Staff member
Licensed User
You have two options. You can iterate over the array and check for equality.
Or you can use the Tag property to store the array index.
In this case there are two values so you need to declare your own type:

Licensed User
With all the FAST help, my project done in half time

I just came across this thread while searching for something else.
I believe that the above code should be in Activity_Create, not Activity_Resume.

Loading the state from a file should be done in Activity_Create.
If FirstTime = False you can optimize your application and load the state
from a process global variable instead of a file.
Click to expand...

And that Activity_Resume should [only] be used for...

resuming elements like timers, animations, GPS, camera and so on
[which presumably were turned off in Activity_Pause]...
Click to expand...

...since code in Activity_Resume is run every time the app is started, even if the
device was just turned on, and every time you leave the app and come back
even if Android didn't kill the app and its data/states are still in memory.
www.CardSharkGames.info

Staff member
Licensed User
You are correct. Putting the code in Activity_Resume is correct but less optimized.
B4X programming - video tutorials
All Android developers should read
Teaching programming with B4X

Hello Erel,
Thank you for putting this code in the forum.

Simplicity is the key...
U

thanks for the code that shows how to programmatically add views. It (as many other things) now is very easy, esprecially when compared to other development environments. I think you are very good at making things simple (yet flexible) without oversimplifying.

Regards,
Before you criticize someone, you should walk a mile in his shoes; so when you criticize him, and he gets angry, you'll be a mile away -- and have his shoes.

I am new to the B4A forum but I like what I see so far. I started with this demo to test out my system. I added a feature so you can play the computer /android option. If anyone is intersted I can post. I can't promise excellent code writing, but it works.

Thanks to Erel for the demo.

Licensed User
I tried to use Panels array to create panels grid but I receive an error when try to retrieve the tag id: