To deliver more engaging viewing experiences to their users, many Android OEMs are experimenting with new, super widescreen smartphones. Samsung has just announced a new flagship device, the Samsung Galaxy S8, featuring a new display format with an aspect ratio of 18.5:9. At the Mobile World Congress earlier this year, LG also launched their new flagship device, the LG G6, with an expanded screen aspect ratio of 18:9. 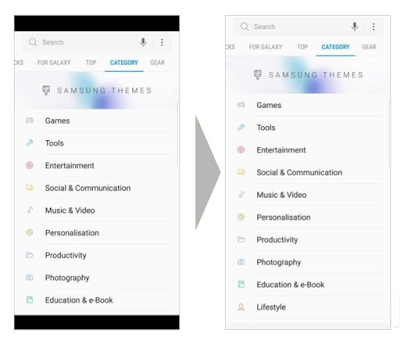 In order to take full advantage of the larger display formats on these devices, you should consider increasing your app's maximum supported aspect ratio. To do so, simply declare an android.max_aspect <meta-data> element in the app's <application> element:


B4X:
Where ratio_float is the maximum aspect ratio your app can support, expressed as (longer dimension / shorter dimension) in decimal form.

We recommend that you design your app to support aspect ratios of 2.1 or higher. For this, you would add the following to the <application> element:


B4X:
Note: if you don't set a value, and android:resizeableActivity is not true, then the maximum aspect ratio defaults to 1.86 (roughly 16:9) and your app will not take advantage of the extra screen space.

Staff member
Licensed User
Longtime User
It should be AddApplicationText instead of AddActivityText.
[B4X] Features that Erel recommends to avoid
[B4X] "Code Smells" - common mistakes and other tips
S

Licensed User
Longtime User
I don't get it. we have dozens of different resolutions and there we didn't have to do anything to make it full screen.

What makes this case require this extra step? is it like a second screenmode that you can enable?
Did you appreciate my help here or on the chat? Maybe it's worth a small donation? Thanks in advance!
Try out my free games for Android & IOS | Free app promotion with Tappx​

sorex said:
we have dozens of different resolutions and there we didn't have to do anything to make it full screen.
Click to expand...

You do not need to set a maximum aspect ratio if an activity's android:resizeableActivity attribute is set to true. If your app targets API level 24 or higher, this attribute defaults to true.
Thanks and regards,
The Multiverse Team

Licensed User
Longtime User
So, is it easiest for most apps (those that don't have special screen-size needs) to set android:resizeableActivity to true, so they don't need to muck around with aspect ratios at all?

Dave O said:
So, is it easiest
Click to expand...

What if tomorrow Samsung would produce a 20:9 TV?

I can not write what I think of them!
B4J Source code of lmSnippets Manager & lmPWsManager

Licensed User
Longtime User
I have done all of this, with support for split screen by adding these two lines in manifest:

B4X:
10 value is to be sure to cover all future possible and impossible resolutions for example 90:9 (10:1).
NOTE: All my activities use anchors and designer script, so I don't need to think what resolution is on device.

EDIT:
If you use AdMob and smart banner, use calculation from link below, for banner size and banner will resize itself in split screen and ad will be shown:
https://www.b4x.com/android/forum/t...ith-firebase-backend.67710/page-3#post-457009
Last edited: Mar 31, 2017

i am getting an error when i add this to my manifest:

Erel said:
You need to use a newer version of android.jar (Tools - Configure Paths).
Click to expand...

i have a galaxy s8 and i have added those 2 lines to the manifest but still i see a black area on the bottom of the phone.

can i get rid of this:

)
You must log in or register to reply here.

Android Question Most efficient way to get image aspect ratio