The Samsung Galaxy Tab is a neat Tablet running Android 2.2.

The following steps are required in order to connect it to the IDE.
- When the device is not connected, go to Settings - Applications.
Make sure that "Unknown sources" option is checked.
Open the "Development" page.
Check the "USB debugging" option and also the "Stay awake".

- Go to Samsung website: Samsung Mobile Innovator - Samsung Developer program for Symbian, Windows Mobile and Java
For some reason you cannot download the USB driver without registering.
So first register and then download the file under Samsung USB Driver for Windows.

- Connect the USB driver and the device should be connected in USB debugging mode.

It should now work with the IDE. 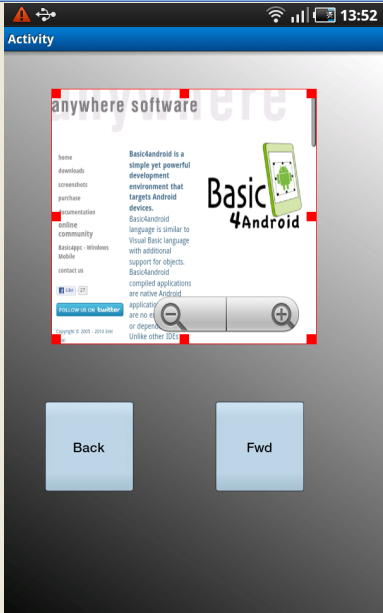 See this page for some tips related to large screens emulators:
http://www.basic4ppc.com/forum/basi...-creating-emulators-large-screen-devices.html
Click to expand...

It looks like WebView, right?
I'm not good at English, please understand. Thank you.

:sign0006:
V1.1 will be released next week and will include WebView, voice recognition, content chooser and more...
[B4X] Features that Erel recommends to avoid
[B4X] "Code Smells" - common mistakes and other tips
K

Licensed User
Hmmm, so what if I want to develop strictly for landscape mode (I use a similar tablet - the Viewsonic Gtablet - is has identical specs, just a much larger screen), how would I force it into landscape mode and would I still enter 600x1024x1.5 or 1024x600x1.5?

Hmmm, so what if I want to develop strictly for landscape mode
Click to expand...

You can force your application to be landscape mode. It is under Project - Orientations supported.

You should enter the values that match your target device. See this thread as well: http://www.basic4ppc.com/forum/basi...-creating-emulators-large-screen-devices.html
[B4X] Features that Erel recommends to avoid
[B4X] "Code Smells" - common mistakes and other tips
K

Erel said:
You can force your application to be landscape mode. It is under Project - Orientations supported.


You should enter the values that match your target device. See this thread as well: http://www.basic4ppc.com/forum/basi...-creating-emulators-large-screen-devices.html
Click to expand...

Licensed User
Am I wrong in attempting to do all layouts programatically based on 100%x and 100%y rather than using the designer?

I'm hoping that my non-graphics layouts work on "normal" screens (like my HTC Desire) and large ones (like my Galaxy Tab). It's OK so far, but short on docs.

The GUI designer seems like it is designed for a set of fixed sizes, rather than variable 100% layouts?

My only concern is that if I use the GUI editor I have to design for each size, but programatically doing 100%x and 100%y means auto-scaling without problems, unless I'm missing something?

Staff member
Licensed User
There are several approaches. Layouts designed with the GUI editor will be scaled based on the device dots per inch value. So the same layout can be used with high resolution screens and low resolution screens.

So you can choose to create several layouts variants (2-3) to match different width/height ratios. At runtime the best fit will be selected.
[B4X] Features that Erel recommends to avoid
[B4X] "Code Smells" - common mistakes and other tips

Thats how I do it. I wish there was a way to have the designer do it that way too

That's what i do. I've never touched the Designer, not in VB and not in B4A.
my english has room for improvement.

Back when I was originally working on my app, I had created a layout for 600x1024 @ 1.5 scale, specifically for the Galaxy Tab.

I had created an AVD using the Galaxy Tab addon, which according to the specs, is 1.5 density. I could swear that this is what the B4A designer showed it as, but now I am adding some new stuff and happened to notice that the designer thinks the Tab AVD is 600x1024 @ 1 scale.

Now when I run my app on the Galaxy Tab AVD, everything is shifted to the upper-left corner. At this point I am not sure what to do.

Should I create a generic AVD 600x1024 @ 1.5 and use that as the Galaxy Tab, or should I create yet another variant now for 600x1024 @ 1? I've seen other reports here of the Designer showing the incorrect AVD specs, but I don't know which to believe. I want to make sure I am laying it out right.

Thanks for the info. I guess I will do that. What's odd is that if you create an AVD using the Galaxy Tab add-on and then look at its "details", it states:

Licensed User
I would suggest you to create a new layout with only the 600x1024 / 1 layout variant and try it.

I was just about to do this (delete the 1.5 and start over with a 1.0) but then I re-read Erel's first post in this thread:

I don't really know which is right. I don't have a Tab to try, and I would hate to go and change it if it happens to look right as it is.

Edit: I just saw a "revision 1" for the Galaxy Tab in the AVD manager and Android SDK Tools Revision 12. After installing that, now it seems to be appearing as scale 1.5 to B4A (although I could swear it did this before).
Last edited: Sep 6, 2011

Licensed User
I have a Galaxy Tab 7" and can confirm Erel's settings work correctly:

Jim Brown said:
I have a Galaxy Tab 7" and can confirm Erel's settings work correctly:


Thanks Jim. I guess I will just leave it then unless someone complains. I don't understand why earlier today B4A was reporting it as 1.0 scale when I'm almost certain that couple weeks ago it had been reporting it as 1.5.

I'm chalking it up as an Android SDK glitch, and as much as I like just about anything Google craps out, it can sometimes be a bit quirky.
You must log in or register to reply here.