Licensed User
Problem solved, but this is weird. I copied the suspect fxml file to a new file DER2.fxml and added it to the B4J files tab.

I was able to open DER2 in the designer, it showed up un-minimized, although I had to resize the window. I then saved it with the original filename DER and also as the new file DER2.

I tried to open the DER file, but once again it opened "minimized". I then opened the DER2 and it opened correctly.

Looks like my layout is getting a new name . In the B4J files tab I removed the old DER.fxml.

Hello,
I am in the middle of developing a B4J project. The fxml which represents my main page no longer opens in the scene builder.

I click on Designer – fxml filename – edit layout. For this one fxml file I get an icon for the Scene Builder on my taskbar but the fxml layout editor does not show. it used to show for this one file and the editor shows for other four fxml files.

I get the same thing if I try to open this one fxml file directly in the Scene Builder. I'm using Version: 2.0-b20 of the JavaFX Scene Builder.

All I get for this one file is:

For the other four fxml files, I get something like: 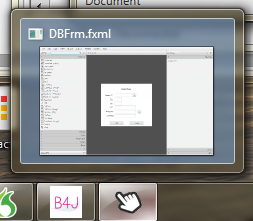 and the layout editor shows on the screen.


How do I get this file show properly in the Scene Builder?