I want to try for the first time in one of my apps the InApp billing and I have some questions. I quote from the android developer site text:

This check means that it only checks for the version of the InApp billing api we use in the application and also if the Google play supports billing from the user's country. If I get a Supported = true which are the relevant messages for that answer. The same counts also for the Supported = False. Generally I found the following response codes and relevant messages from the server: 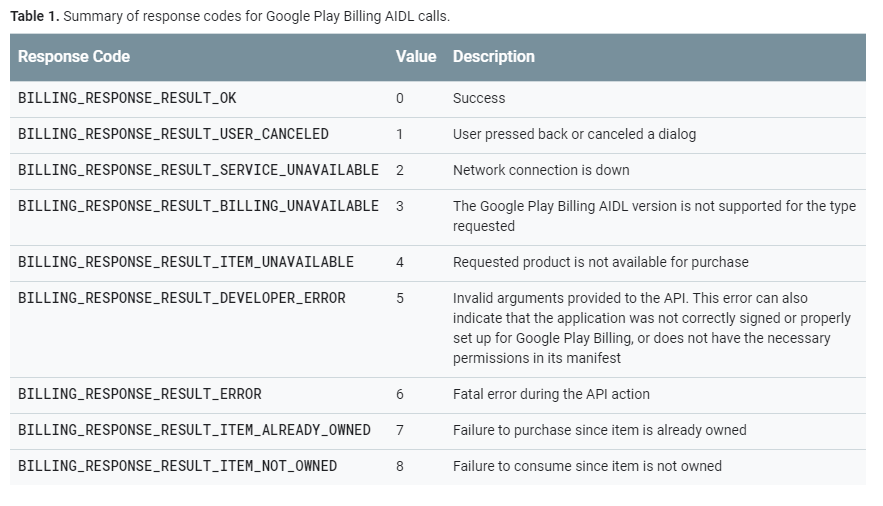 Are some of these responses the messages that BillingSupported event returns? And if it is are these messages always returned in English or in the phone's locale?

Does InApp billing checks if the user has entered a credit card in Google Play in order to be charged? If it does not do I do it and how?

Do I have to implement the interface for the user to enter their credit card details or all these are handled by Google? It is not clear enough for me. How is the full process being done (does chrome opens or Google Play app?) ?


I could really use an expert's advise in InApp billing because I prefer the shortcut way rather than the "trial-error-knowledge accomplished" method.

Thanks in advance
DHQI.gr Nikolaos Hatzistelios - Add In App Purchases to both your B4A & B4i apps ON THE FLY - Click here

My contributions to the community
God lies in the equations - Everyone is innocent until proven guilty!
Sort by date Sort by votes
A

All these are handled by Google!
Upvote 0

Licensed User
Longtime User
Hi asales, thank you very much for your time and your answer. I have read both tutorials before I ask my question and both are incredible pieces of information. Still there is not a full analysis of the possible messages in all the cases. F.e. if we initialize the billing manager and there is no internet connection as Ilan describes what will be the relevant message. On the other hand a more careful reading of the situation made me wonder if no internet at all is required for the billing supported sub and the check is being done within the android device and the Google play services that are installed in it.
DHQI.gr Nikolaos Hatzistelios - Add In App Purchases to both your B4A & B4i apps ON THE FLY - Click here

My contributions to the community
God lies in the equations - Everyone is innocent until proven guilty!
Upvote 0
A

Licensed User
Longtime User
I don't understand your issues, but I think is better you try the example posted by @ilan in the second link and see the behavior, when there is no internet, for what you want.
Last edited: Aug 6, 2019
Upvote 0
You must log in or register to reply here.