Here is my latest creation. As usual it is pretty much useless, but I had a lot of fun designing it and seeing it in real life.

As you may know I have been working in satellites activities and spent most of my pro life into Low Earth Orbite satellites. So here is a moke up of a ground station antenna, able to track any LEO sat you want.

The antenna is 3D printed from a design I made starting with a 6 meter dish antenna picture.

The dish is now 20cm wide, has a real paraboloid shape and is moved by two stepper motors fully hidden into the pedestal of the antenna
the 3D models are available here
Two hall effect sensors and two magnets allow to setup the antenna horizontal and pointing to north at boot time. They are also hidden into the structure. 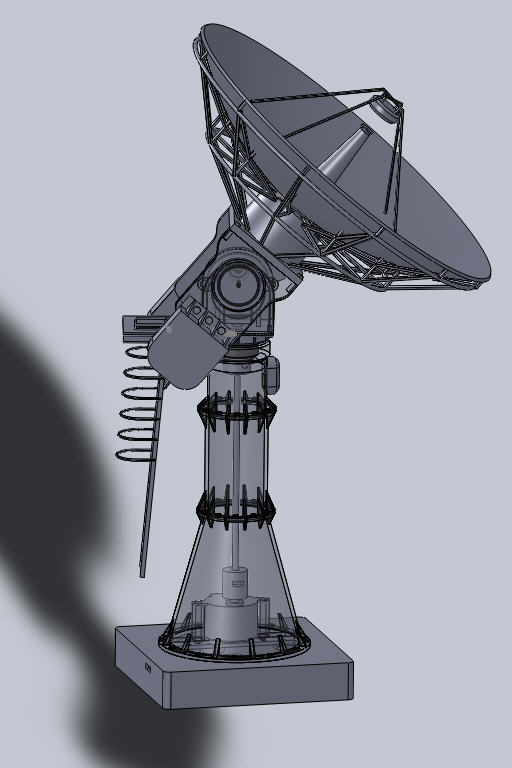 A B4X App allows to visualize the track and to send parameters to the antenna : which satellites to follow, the Two Lines Elements and the time. 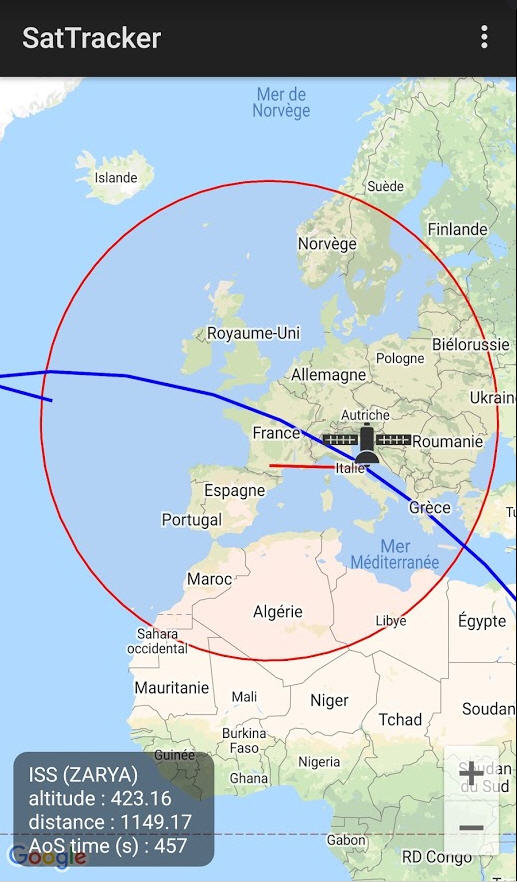 Finally two video of a real ISS tracking in my home
One at 16x speed and one much longer but with explainations !

This is a terrific project, and you've done an amazing job both in the antenna design and in the software development. I've completed the build, albeit with some modifications (I didn't have any lead, so I enlarged the weight boxes and used less-dense BBs, for example, and used an ESP32-WROOM-32 development board instead of the Lolin32) and it runs. I managed to screw up the orientation of the antenna on the pedestal when I glued it all together, so my elevation Hall sensor is in the wrong place and it won't calibrate, and I used wires that are slightly too stiff for the sensors and the motors, so there's some jitter in azimuth, but it runs and points just fine. I was wondering, though, about the Pro version. Your documentation says to contact you about it. I really like the idea of having a visual representation of the satellite pass while the antenna is pointing. I have a friend who is about halfway through his build of the antenna, and we would both be interested in getting the Pro version. Is this possible?

Great to see the interest in this cute gadget
The "pro" app curently needs the two magnets to boot properly. I could do the mod like in the lite version to skip this.
For the moment I have not pushed it on the googlePlay, it's on the todo list ! (you are the first one with this request !)

Meanwhile you could try this app https://play.google.com/store/apps/details?id=com.us.beeweek.starlink&hl=en_US&gl=US
It's basically the same as mine but not connected to the antenna. So you would have to initialize it with the same satellite ID as your tracked one.
Beware that from times to times this app crashes...

Thanks for the quick response. My friends and I really like the antenna... we worked with radar and telemetry systems for many years and this brings back great memories.

I think I've figured out how to fix the magnets, I'll only have to reprint the socle parts (that's what I get for gluing things up prematurely.) I'm building up a small test bed to operate the motors to test the sensors, to make sure I really understand my problems.

I'll try the Starlink app, it sounds interesting. I'm not so sure about posting on Thingiverse. It seems like a pretty involved process, and I'm basically lazy. Maybe if I get it fully working...

I've also noticed that my counterweights are too light. I used your recommended 60gm each, but it seems like for my dish that's not quite enough... maybe because I used PETG rather than PLA? Is PETG somehow a little denser? Anyway, it doesn't seem to cause a problem, but if I ever do it again I'll measure the weight of the antenna before I finalize the counterweights.

Anyway, thanks for a great project.

Licensed User
Longtime User
You'd better have more weight on the antenna side rather than on the counterweight one. This helps to balance backlash on the elevation motor.
You will see this when you to 90° elevation and then go back to horizon. There is a "bad motion" due t this backlash... Poor motors indeed, but so cheap !

BTW, posting on thinghiverse is much more easy than printing this antenna !
Just create an account, go to my antenna, click on "post a make" and add a picture !
JP
M

Licensed User
Longtime User
can you tell us what you use to receive those signals of ISS and sat's. Is that the ESP on 2.4gig?

Licensed User
Longtime User
There is no way to receive satellites with such a small plastic dish !
telemetry bandwidths are generally 2GHz for platform monitoring and control and 8GHz for payload acquisition.

This antenna is only a mokup able to track satellites using 2 lines Elements to get ephemeris data (read fisrt post).
JP
M

Licensed User
Longtime User
ah...ok
i was already figuring HOW this could work..... There seems to be wifi on board the ISS, but with such a small gain i think it is bearly impossible to receive those signals with a chip like ESP...... and only 20cm dish at distances of 400km .The signal losspath is beyond the ESP noise figure.
The antenna is plastic but you could cover it in some way with foil or whatever.

MbedAndroid said:
There seems to be wifi on board the ISS, but with such a small gain i think it is bearly impossible to receive those signals with a chip like ESP...... and only 20cm dish at distances of 400km .The signal losspath is beyond the ESP noise figure.
Click to expand...

BTW, receiving signal from space does not always need a big antenna. But must be into another range of freq (around 900MHz) and using a very efficient way to transmit data --> Lora

Have a look to this video it's impressive :
JP
I

Hello there, i found your project on www.cults.com and found it very interesting! I will like to implement it on my free time, and before to print it, i would like to check the software mentioned on your pdf. Is it possible to know what program do you use con Android and share the apk?

I would appreciate it very much! Have a good one!

Only the "lite" version is available with source code.
I haven't yet published the android code
JP
I

Hi freedom2000, thanks for your fast answer. I hope to not bother you with some questions I have, I apologize if they are a bit basic, because I'm new on this subject:

- With the PDF you uploaded, is it possible to replicate with other satellites?
- I understand I shall buy the Android APP to see other satellites? If other app is used, what should I check for a correct function?

Thank you very much for your time

Licensed User
Longtime User
No the Arduino App is standalone and allows to enter a list of predefined satellites. --> they will be tracked daily
The only missing features are :
- real time map of the satellites
- GUI to select/change new satellites
- possibility to speed up the time and force the next pass
- Bluetooth Low Energy from phone to Antenna (no wifi required for the antenna)

pleas read the doc, all this is explained (and much more !)
JP

I do believe that this moke up as a great potential to explain to children "how it works". And possibly not only children (most of our young ingeneers have never seen a real antenna "tracking their babies").

I have just implemented a "time acceleration" option --> a lot of fun to see the pass with x10 speed (both antenna and ground track of course)
Click to expand...

Hello your prohect looks amazing ,we want to build one for our school project can you share the parts we need to buy please ?

Licensed User
Longtime User
Thank you for your interest !

Everything is explained here : https://www.thingiverse.com/thing:4625420

You will find there a pdf file with detailled instructions : SatTracker_howTo.pdf