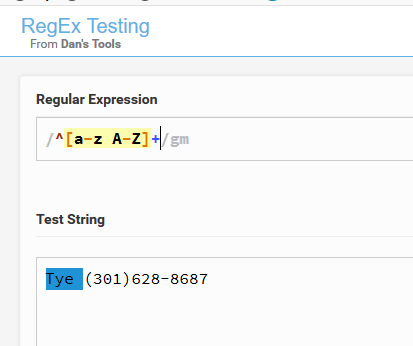 Licensed User
That regex will grab a word (or words) at the beginning of a line. Can't tell whether it is specifically a name. Will work in B4X no problem; difficult to say why it is not working for you without seeing your code.

Better yet, post some sample text that you will be extracting from, showing the various forms that names will take, and ideally some that *not* match too.

emexes said:
Also, what to do about names that are:
Click to expand...

I once had a student name Li Ja Ny (or something like that) and I never did work out whether "Ja" was part of her first name or last name.

Similar to Lisa Marie Presley, where "Marie" seems to be part of the first name, rather than a middle name.

All I really need is the name

I'm on the road celebrating my 43rd anniversary and working on a laptop that is almost as old (only kidding) will post some code when I get home.

Oh... I should mention that much as the data looks like it is fixed column it isn't. I am reading and parsing a PDF and the data is varying length. Would be nice if it came in as fixed column would make parsing so much easier
Last edited: Sep 20, 2019

Licensed User
looks like tab-delimited input to me. split on \t or chr(9), no?. then take field 1 (the name field). are you familiar with B4A's Regex.split? search for regex.split here in the forum
"A little kindness - as little as required by applicable law."
E

Licensed User
Looking at that data, and assuming that for some reason you cannot extract the name column by width, I'd be splitting it into fields by observing that:

should work. Not tested, but:

what could possibly go wrong? I guess we'll find out when you log the lines that DON'T match ;-)
E

Robert Valentino said:
I should mention that much as the data looks like it is fixed column it isn't. I am reading and parsing a PDF
Click to expand...

This made me smile - the optimism of youth!

Probably correct: no is the likely answer. Having said that, it's worth a go - you never know your luck, perhaps the PDF-to-text transform is adding tabs.

If not, then what might work is to split on [ ]\([0-9_]{3,3}\) which would split on the telephone area code (and the preceding space). The first field of that split would be number-lastname-comma-firstname, and if you took everything after the comma, that should leave you with just the first name (and some spaces that you can easily .Trim).
S


B4X:
Waiting for debugger to connect...
Program started.
sdffd sdfdsfdf
erere
adada
Last edited: Sep 20, 2019
Did you appreciate my help here or on the chat? Maybe it's worth a small donation? Thanks in advance!
Try out my free games for Android & IOS | Free app promotion with Tappx​
E

if you don't mind losing the entries that have no phone number ;-)

Having said that, if the entire data is presented as one string, rather than a line at a time, then I have my own little oversight: the ^ start of line should really be \n, and so my final (well: current final) pattern is:

B4X:
which has the bonus features of:
- not capturing middle name initials
- presenting the names as two fields (last name and first name) so that can use in mailmerge eg "Dear Earl", rather than "Dear Bedney, Earl R.,"
- not capturing spaces adjoining names (although .Trim fixes that easy enough)
S

Licensed User
you mean that first number in the line?

that seems like an id that is always there.

but indeed it's guessing when you don't have the actual output to play with.

this captures it fine


B4X:
Did you appreciate my help here or on the chat? Maybe it's worth a small donation? Thanks in advance!
Try out my free games for Android & IOS | Free app promotion with Tappx​

Licensed User
I don't know, I must be doing something wrong.

Neither of these Regex statements produces any resulsts
S


B4X:
Did you appreciate my help here or on the chat? Maybe it's worth a small donation? Thanks in advance!
Try out my free games for Android & IOS | Free app promotion with Tappx​

Licensed User
YES, you are so right. Thanks so much
E

Licensed User
If Player.Name is the name and telephone number of a single player (quantitively, not maritally ;-) then perhaps it might be simpler just to delete the phone number ie everything from the "(" onwards, eg:

B4X:
where the .Split returns an array of strings, the (0) gets you the first of those strings, and the .Trim removes the column-separator spaces.
E

Licensed User
yeah, in his last case it can be a oneliner but he's chaning the rules/data each time

maybe he's testing and will his final data be the one from the screenshot again.
Did you appreciate my help here or on the chat? Maybe it's worth a small donation? Thanks in advance!
Try out my free games for Android & IOS | Free app promotion with Tappx​
You must log in or register to reply here.
Share:
Facebook Twitter Reddit Pinterest Tumblr WhatsApp Email Link
Top