I hope my example here makes sense. There seems to be a scope collision between a stringbuilder defined at class_globals and one defined at sub level when the variable name is the same.

I could be wrong with something, but please check.

Licensed User
Just out of curiosity, why are you doing the "Append(xitems)" on line 17?
That reflects exactly what you're asking it to do.

Licensed User
The reason for doing that is to try and explain the theory of this bug here.

1. We have defined a global variable that is a stringbuilder called sb. If we append anything to it, we should get back what was there initially and the new additions, right? 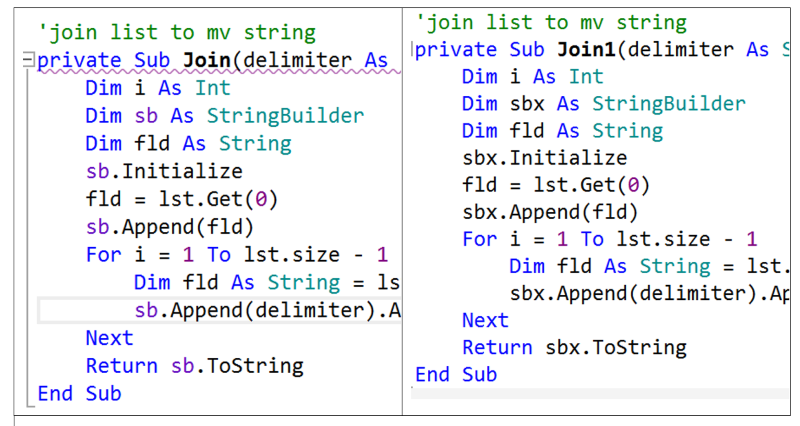 2. Above we have 2 subs, one named Join and the other Join1. The stringbuilder variable in Join is named sb and the one in Join1 named sbx.

Now, if one would run.


B4X:
it will print this only.


B4X:
Right? Join1 will also do the same


B4X:
4. When the class is initialized, we add some content to this sb variable


B4X:
5. In the main code, we define and initialize the class.


B4X:
If you would change sb to Public in the class and execute log(cls.sb.ToString) it will show..

The only difference between the two subroutines is the variable name between sb and sbx. With Join, all the contents of the global sb are overwritten. With sbx, the correct code execution happens. Thing Dim sb as stringBuilder inside Join is supposed to be having a local scope to that sub ONLY, however it's affecting the global variable scope. Thus this thread. I hope you understand.


B4X:
Will cause the global SomeGlobalList to be initialized.
Click to expand...

Licensed User
I hear your arguement and there I ended up changing the variable name to avoid the conflict, thing is I have not had this issue before with the StringBuilder and have always defined most of my stringbuilder variables as sb whether locally or globally.

I have looked at the transpiled code sbclass.java, and for Join and Join1, there is something different.


B4X:
The only difference is this line...


B4X:
Me thinks that if this will not break much of the code, when transpiling...

1. If a variable is Dim-med as a List, Map, StringBuilder e.g. Dim X as List, Dim X as Map, Dim X As StringBuilder
2. Is this Dim? inside, "_class_globals" ?
3. If No, then anywheresoftware.b4a.keywords.StringBuilderWrapper _sbx = null; for example before the _new call.

If its not possible perhaps the IDE can detect when variables that are already defined globally are being Dimmed again and throw an exception on compile!

Licensed User
Noted with thanks and I dont mean to be a pain, but I must kindly request to please be provided a working example that demonstrates this, specifically for the StringBuilder for now. I'm really failing at grasp how to make this work. I have included my broken example here.

There is so much code that I need to apply this solution to and I am stuck here! Eish!

Staff member
Licensed User
I don't really understand what you are trying to do however when I run your project I get:
Mashy...
Mashy Again...
a,b,c
[B4X] Features that Erel recommends to avoid
[B4X] "Code Smells" - common mistakes and other tips
Upvote 0

Erel said:
however when I run your project
Click to expand...

Sorry, that's the working example where I have used different variable names for the sb variable.


B4X:
So that it uses Join and not Join1. What Join does is to dim a global variable inside a sub, which is built from items from a list. That result is then fed to the globally defined variable.

PS: This was just my silly example, all I need is just a working example for a global StringBuilder variable that is dimmed at sub level.

Staff member
Licensed User
I don't see anything unexpected here.
When you dim and initialize sb inside Join you "reset it". At the end of this sub the value will be a,b,c. You then add this value to sb again. So the output is a,b,ca,b,c.

As written several times in this thread the 'sb' variable in Join sub points to the global sb variable.
[B4X] Features that Erel recommends to avoid
[B4X] "Code Smells" - common mistakes and other tips
Upvote 0

Thank you so much. I finally get it. I didn't want to point to the global sb variable, I assumed it was going to be local. Damn! I have been coding so badly all my life with b4x in this instance.

Just a favour then, if possible, can you add something to the IDE just to warn when a global variable that follows this approach is dimmed locally again? For slow learners like me that could do a great deal of help. This is so incredible. Little knowledge is dangerous hey.

Mashiane said:
warn when a global variable that follows this approach is dimmed locally again?
Click to expand...

The IDE shows you that it is a global variable. It paints the variable with purple color.

A warning for this will add many "false positives" as there are many valid cases where you would like to redim a global variable.
[B4X] Features that Erel recommends to avoid
[B4X] "Code Smells" - common mistakes and other tips
Upvote 0

Licensed User
Thanks Erel, I will keep my eyes open for this in the future. Now I know.
Mashy's B4J Overview, My CodeProject Articles, B4X Design, Documentation ,XML2BB ,BANano