Licensed User
Longtime User
No more drives for me everything is running nice and fast. 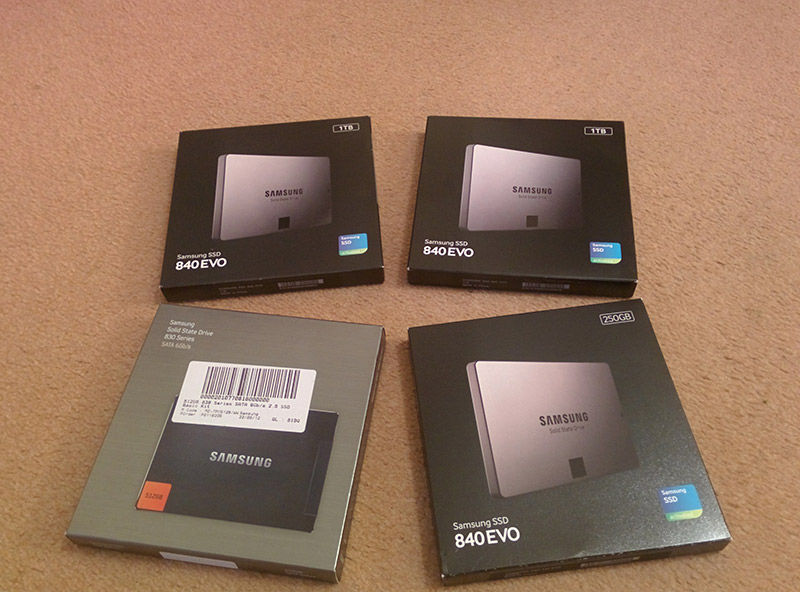 Not for now anyway...
Simply Invoice

Peter Simpson said:
No more drives for me everything is running nice and fast.
View attachment 32731

I have been running SSD's for quite a while. They are nice. But...I still back up to regular hard drives, and USB drives, and Flash Drives, and on many pc's. If an SSD bites the dust it is usually nonrecoverable and you have a nice little brick.

"Defeat never comes to any man until he admits it."Josephus Daniels

Licensed User
Longtime User
Not yet that's it!..
When Samsung moves the battery, screen and the shell to the cloud, then that's it.. We will still play with these toys.
On Anger Resume Next

Licensed User
Longtime User
I'm still not sure how you could RAID an SSD when SATA saturates at 6Gbps. Maybe its multilane through PCI or waiting for a new standard.
☢ My Apps | My Wiki | My Blog
Try out these libraries: MSMaterialDialogs MSDynamicGridView VideoConferencing MSCardView and many more...

Licensed User
Longtime User
@schemer SSD I use 1 x 1TB in my i7 development laptop, 1TB in my server in the loft, 500GB in my i5 test laptop and 250GB in my USB 3.0 external backup device. My main live backup solution is in fact wireless to a 1TB old skool spinning HDD also sitting in my loft.
Simply Invoice

Peter Simpson said:
@schemer SSD I use 1 x 1TB in my i7 development laptop, 1TB in my server in the loft, 500GB in my i5 test laptop and 250GB in my USB 3.0 external backup device. My main live backup solution is in fact wireless to a 1TB old skool spinning HDD also sitting in my loft.
Click to expand...

That is the way to do it. Don't forget to backup your backup. I also forgot I even backup some really important stuff to CD or DVD too. Can't be too safe if its important. I even back up to my wife's pc but she doesn't know it.
schemer
T

Licensed User
Longtime User
Too small for my taste. However, I like SSHD a lot, with (in common cases) the speed of an SSD, but the size, reliability and price (almost) of a HD.
Try my apps: SerialVideoPlayer Full Free | JukeDroid Full Free | AlwaysSMS Full Free

Licensed User
Longtime User
Hello @Troberg, I've had SSHD's. They cache what it they think is your most used files with it's smart technology (which is a great idea). It works okay and is great for cashing/loading operating systems and is also great for the PS4 . But it works just as slow as a normal HDD when reading something for the first time, that's why it's now sitting in the PS4 and I have 2 x 1TB SSD's in my main laptop and PC. I love the SSD speed increase that I get whilst assembling large Visual Studio projects. My SSHD assembled large Visual Studio project only slightly faster than my HDD, SSD is way way way faster, I find the same with other programs what constantly change data. SSHD's are good though.

Quote: "the drive that survived the longest survived more than 2.4 petabytes worth of sustained writes. That’s probably about 240x as much writing as a typical consumer SSD would need to endure over its lifetime."

Not all drives will last that long but they last a very long time. I've had computer in the past where my HDD have failed or started to fail. In all my time owning computer shops and programming, I personally have never ever had a memory sim die on my.

Buy anyway each to their own
Simply Invoice

Simplicity is the key...
T

Licensed User
Longtime User
Face it, most of the data I store are simply storage, and extremely seldom used (even OS files). So, even the cache on the SSHD is enough to hold almost all the files actually used. For example, a large compile that takes over a minute on HD is done in seconds on my SSHD.

As for how long the longest lasting drive held out, I find that pretty uninteresting. It's the one that failed first that I find interesting.

Licensed User
Longtime User
Hey @Troberg, I've never had memory card die, never in 20+ years of using them (I'm probably just lucky ). I can't say the same about USB sticks though. I've had so many memory sticks die that I no longer use them, even branded ones. I keep everything I own in A1 mint condition including my past USB memory sticks, just like you I work hard for my money so I take pride in anything that I buy, I keep them safe and sound. USB sticks is a pain in the butt. Actually thinking about it, I do own 1 USB stick which I created as a system restore for my Samsung Laptop (I've never done a restore so I hope it still works ), Me and USB sticks really don't like each other.

I do agree though, Sooner or later (hopefully later) one of my drives will fail, but so far (touch wood) after years of owning previous SSD drives which I've now sold fully working, I have no complaints about SSD. Hey normal HDD's (I've had them fail), but hey that's technology for you, especially with moving parts...
Simply Invoice

Licensed User
Longtime User
In my opinion the SSD is the best upgrade you can give an aging PC. I've not had any problems yet with mine, but then I've never had any problems with my USB pen drives either. A couple of them are starting to look really battered as I take them to work everyday. One thing I am careful to do though, is always set them to safely eject before unplugging from the PC.
"Defeat never comes to any man until he admits it."Josephus Daniels

Licensed User
Longtime User
I agree with SSD upgrade being a smart move. Pen drives are great!! What did we do without them. However WATCH THOSE KNEES! with computer towers normally sitting on the floor CD trays get broken/de-railed along with USB pen drives breaking off either in the USB port or off the end of the pen itself.

Licensed User
Longtime User
I have a problem specific to my home town with SSD. We have two large industries that uses a lot of power, so what should be a nice 220V 50Hz sine wave looks like a coiled barbed wire. This wears down electronics. With a HD or SSHD, I can simply buy two identical ones when it failes, transplant the electronics from one of the good ones to the bad one and transfer the data to the remaining good one. With SSD, I'm pretty much screwed.
Try my apps: SerialVideoPlayer Full Free | JukeDroid Full Free | AlwaysSMS Full Free
You must log in or register to reply here.
Share:
Facebook Twitter Reddit Pinterest Tumblr WhatsApp Email Share Link
Top