Staff member
Licensed User
You can subscribe to this thread to make sure that you don't miss any important announcement.

Members who want to announce something that is important to the community should post the link to the announcement here.
B4X programming - video tutorials
All Android developers should read
Teaching programming with B4X

Licensed User
The upcoming version of the B4X Object Object Browser (again, still free) will have an inbuilt Snippet Manager! 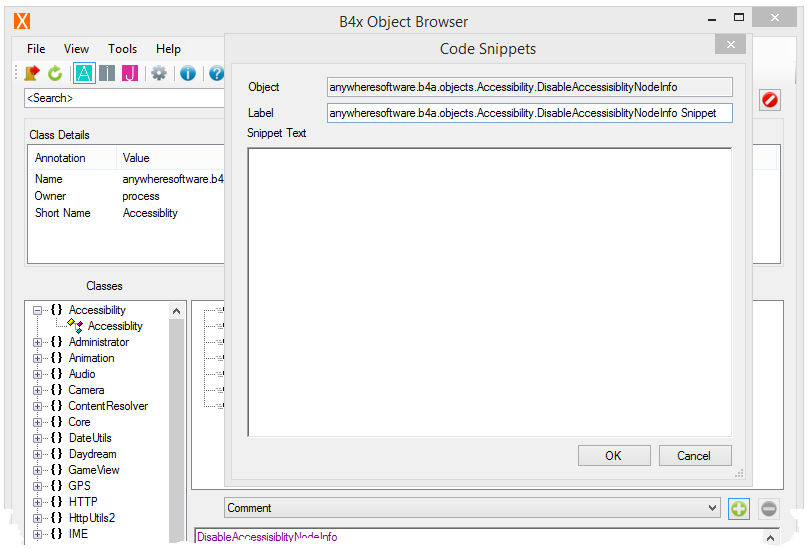 Licensed User
How will you "know" it's a snippet, by the post title tag?
I ask this because there are a lot more usefull "snippets" inside some question threads than in the snippets area...
Maybe its time to start re-indexing some...

Licensed User
The intention of this feature of the B4x Object Browser is to allow people to save different pieces of code against Methods, Properties and Fields of B4a, B4i and B4j. This is primarily so that once you find some useful code, you can get to it in the future.

Unfortunately it will be up to the User to determine what snippets to add.
At this moment, I can't do everything for you
B4X Object Browser posts: Original New

Licensed User
so if I understand correctly, we can/will be adding the snippets directly inside object browser?

Vader said:
At this moment, I can't do everything for you
Click to expand...

I didn't mean that... Only that at this point, code snippets are too scratered... Your app will allow to gather them for everyone's use and (if you have implemented this) to organize them by Tags

Licensed User
Correct. Navigate to the Method / Property / Field for the snippet.

Select the text of your snippet. Drag the text onto the B4a Object Browser "Add Snippet" button.
The dialog shown above will open, allowing you to modify the snippet and change it's name.
Click OK when done.

Licensed User
So a few months back, I was invited to join the Google Mobile App Developer Panel (as I'm sure other B4A users were as well) - & coincidentally was issued with a pending app suspension warning on the same day from Play Store...! Anyway, in those first days when I & other invitees onto the panel started posting, it became very obvious that there was a lot of unhappiness & fear from developers about the way they were being treated by Google, with quite a few of the contributors having had apps & accounts suspended & banned. Several of us were very vocal about the situation & there were a lot of comments made on the panel about the poor treatment of developers generally & also a lot of specific examples of how seemingly quite successful developers were now unable to even publish apps. The whole atmosphere was very doom & gloom...

Anyway, it seems that maybe Google has listened to those (& other, I'm sure) comments, because it looks like they have finally implemented an app approval process along the lines of what Apple does. I submitted a new app this evening & noticed that instead of immediately being published it went into a "Pending publication" status - which I had never seen before. I did some searching through the Play Store help system, as well as generally on Google & it seems that they have indeed started to approve (& in some cases reject) new apps & updates to existing apps.

This might be old news to some of you, but to me it's very exciting & hopefully is the first step in the direction of getting rid of the bad old days of arbitrary suspensions & bannings that seem to be almost impossible to appeal or even get any insight into why the action was taken in the first place. If this really is a genuine attempt by Google to review apps & provide useful feedback & direction to developers, then I applaud Google for finally listening & taking a sensible step.

- Colin.
I'm not a complete idiot - there are parts of me missing...

Licensed User
It must be new... I published a month ago and it only had the usual "few hours" delay to be online...

Cableguy said:
It must be new... I published a month ago and it only had the usual "few hours" delay to be online...
Click to expand...

It still only took a couple of hours to go live, but I also got an email saying it had been removed from the KR store because it has gambling content (it's a Blackjack game).
I'm not a complete idiot - there are parts of me missing...