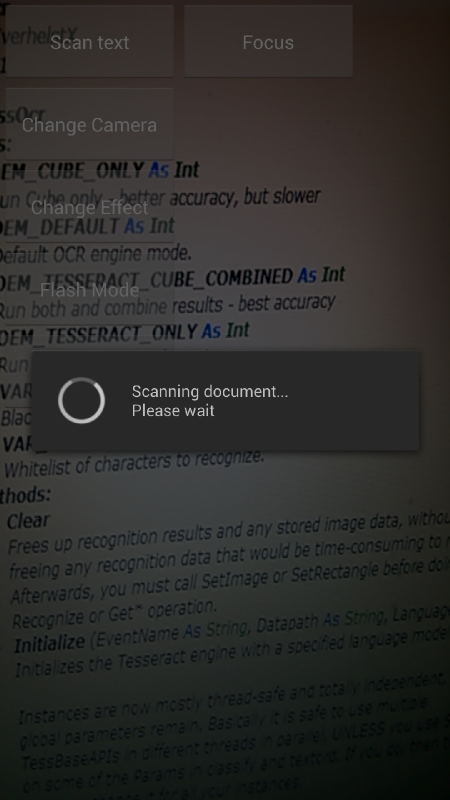 Tesseract is probably the most accurate open source OCR engine available. Combined with the Leptonica Image Processing Library it can read a wide variety of image formats and convert them to text in over 60 languages. It was one of the top 3 engines in the 1995 UNLV Accuracy test. Between 1995 and 2006 it had little work done on it, but since then it has been improved extensively by Google. It is released under the Apache License 2.0.
Click to expand...

What will you receive:
- Project
- Library files
- Documentation
- Readme file

Payment:
Payment can be made with Paypal at the following address:
xtremelyvirtualstudio@gmail.com
The price of the library is 15 Euros.
After transaction has been made, i'll send the library files to the buyer within 24 hours.

Sample:
You can find an example apk file here:
https://www.dropbox.com/s/ab9c8xbn3ds79a1/RSTessOcr.apk
Note the size of the library is big because of the added language file in the Assets.
When deploying your app with this library, you should download the language file(s) from an external webservice to reduce the apk size (with 20 mb)

Licensed User
Tried it but not sure if it works. I get a lot of weird characters in a document. Which language does the demo apk support?

Licensed User
I tried. but I get also a lot of weird characters.

bluedude said:
Tried it but not sure if it works. I get a lot of weird characters in a document. Which language does the demo apk support?
Click to expand...

The 'problem' is related in the Tesseract library itself being not able to recognize the text because the image might not be clear.
The language is in english.

The best thing to do is do some image preprocessing on the image:
http://stackoverflow.com/questions/9480013/image-processing-to-improve-tesseract-ocr-accuracy

- Binarize and de-noise the image
- Greyscale and sharpen the image
- Set whitelist and blacklist to remove unwanted charachters.
- Focus on the text before taking a picture.

You can also set the mode you wish to use:
(I got best result with OEM_CUBE_ONLY, but takes a lot longer)

I'll try to get an image enhancing solution

Licensed User
i will write a free library for it

Licensed User
I think it would be faster using an online server with tesseract, like i wrote in the post http://www.basic4ppc.com/android/forum/threads/ocr-online-free.30925/#post-183945 but i can't get it to work. I don't know how to use the server.

Licensed User
The APK generates an error: "An error has occurred in sub: main_camera1_picturetaken (Java line: 404) java.lang.Nullpointexception)". Regrettably I therefor cannot test the APK.
Releasing this APK and charging 15 Euro's for it is probably too soon... Jammer!

Licensed User
Has anybody made any progress with Tesseract in B4A?

Licensed User
I tried a simple application with tesseract from here. It don't worked too well and i realized that it need a lot of time to get the result, so i prefer the online solution, i mean the result is get from a remote server based on tesseract which work faster.

laviniut said:
I tried a simple application with tesseract from here. It don't worked too well and i realized that it need a lot of time to get the result, so i prefer the online solution, i mean the result is get from a remote server based on tesseract which work faster.
Click to expand...

Can you please tell me who operates such remote servers? Please provide some URL's.

Licensed User
I used http://www.ocrwebservice.com/ like in Erel's tutorial http://www.basic4ppc.com/android/fo...r-features-to-your-android-application.27080/ and it worked very well, but i don't know if it uses tesseract but here http://www.basic4ppc.com/android/forum/threads/ocr-online-free.30925/#post-183945 i wrote about servers with tesseract (http://weocr.ocrgrid.org/) but i don't know how to get working. here is a list of servers: http://www.ocrgrid.org/online-ocr.html
Last edited: Mar 21, 2014

Licensed User
Do anyone know if there is a simpler library for OCR that only needs to read a line or a word of text?

Licensed User
Is this lib dead? If not does it come with support? Not tried the demo apk yet, phone just died, but questions still remain. I need an offline solution for image to text. Ive seen a few people having problems with it mainly lighting for the image taken, what about plain printed text nothing special? or is this the same issue everyone is having with lighting problems?

Licensed User
My problem was converting the image to ARGB 8888, but I've not tried this lib in a while. Android phoyo dev has come along quite a bit.

Licensed User
Cheers for your reply WebbyBoy. Ive not heard back from dev so project is on hold till i find another solution. Will check out phoyo. Thanks
J

Licensed User
Good morning,
I’ve been trying to purchase the following but I get a message from Paypal that you can’t receive payments at this moment. Is there any other way to purchase the product?

Licensed User
Thomas seems to have left
You can't say it's real because it looks so fake...
J