I've put together a simple Flappy Bird clone using the accelerated surface library. It's nothing complicated but was a good exercise for me to play around with making a simple game. I've included the source code for you all to play with if you like. I believe Flappy Bird is the pong of this generation for programmers, it serves as a good example of something you should try to learnt o program to teahc you the basics of setting up a game scene, tracking score, reading and writing a highscore to a file, accepting user input and updating the scene quickly to give smooth graphics. 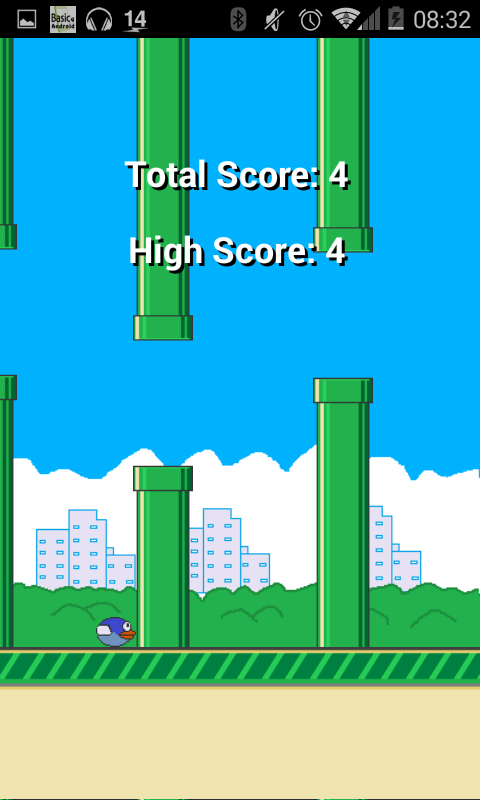 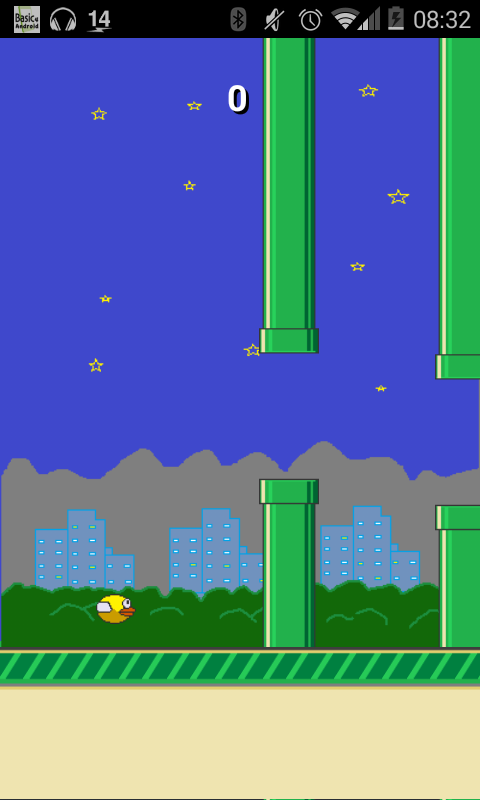 I want to say a big thanks to Informatix for his help with handling the scaling issues I ran into with this to support different screen sizes.

walterf25 said:
You got this same code working on libGDX?
Click to expand...

This code works for me, what's the problem?
_____________________
My apps: https://play.google.com/store/apps/developer?id=Preekog
My personal project http://www.holdemadvantage.com
My top Apps WORDEZ Cruciverba Mania - Calcio A - Briscola 2015

holdemadvantage said:
This code works for me, what's the problem?
Click to expand...

No problem, can you share your code with me for it?
www.genesisitdevelopments.com
Please donate if you've found my work helpful!!!

Licensed User
Longtime User
it is the same code he published! Maybe i am using a good device so i don't see lags.. (Galaxy note 3)
_____________________
My apps: https://play.google.com/store/apps/developer?id=Preekog
My personal project http://www.holdemadvantage.com
My top Apps WORDEZ Cruciverba Mania - Calcio A - Briscola 2015

holdemadvantage said:
it is the same code he published! Maybe i am using a good device so i don't see lags.. (Galaxy note 3)
Click to expand...

Oh ok, is just that you mentioned that you had done it in libGDX, but he didn't use libGDX to make this game, he used the accelerated surface library, i think you're confused.
www.genesisitdevelopments.com
Please donate if you've found my work helpful!!!

Why accelerated surface and not GameView?
I've been looking at writing a game using GameView, but looking at your Cloney Bird is making me think twice...

Thanks in advance for your reply...
Simply Invoice

Licensed User
Longtime User
if have any programer can post in another engine for try fix the lag in old devices?
Empresário | Programador | CTO

Licensed User
Longtime User
Hi, I used accelerated surfaces as it seems like the most simple way of doing it. I'm now going to switch over libGDX as this is a much more advanced engine with more features, such as physics and collision detection. Gameview as far as I know is not being developed any more as these other libraries are much more mature and advanced.
Andy McAdam - www.coffeeinducedgames.co.uk
Download my games - https://play.google.com/store/apps/developer?id=Coffee Induced Games
YouTube Channel - https://www.youtube.com/channel/UCFKnTtteZxaVig_iAcBMYQg

Licensed User
Longtime User
Hello @Douglas Farias , when you say older hardware, just how how are you talking about. After reading your posts I decided to test cloney bird out on my older Android devices.

I also tested cloney bird on my Galaxy Nexus, Nexus 7, Nexus 4 and 5, all worked just fine way past 20 pipes.

I thought that my Archos 43 would have given me lag issues as that is a really old low end device. But I have no issues with that either @Douglas Farias
Simply Invoice

Licensed User
Longtime User
Okay thank you @andymc .
I looked at libGDX but it looks rather complicated, and as I've really just starting in games, libGDX could blow my mind. For clients I've done all sorts of MySQL stock control, invoicing, quoting and contact management apps integrating with Windows programs, but nothing animated. So whatever I do game wise will be my first.

After looking at libGDX and accelerated surface both from @Informatix , I think I'll try accelerated surface and just create my own routines as needed. But knowing me I will probably wake up tomorrow morning, change my mind and decide to go with the more complicated libGDX :-(
Simply Invoice

Licensed User
Longtime User
hmmmmmm i tested and now i see the cause lag, realy strange
i turn of my wi-fi and the game runs normal with no lag perfect

but is realy strange, need turn of the wi fi to run perfect

Licensed User
Longtime User
I've started making progress on the libGDX version. There's a few things confusing me, like switching to using textures and texture regions for frames. But I'm making progress, also the Y axis is flipped which means changing a lot of code. I'm trying to keep the code layout as clean as possible and as close to the accelerated surfaces version as possible. I also wrote this game using BlitzBasic just as a prototype. Which saves having to compile to Android everytime, as Blitz runs natively on PC, I can run the game in less than a second from pressing compile, and I don't have to worry about scaling as I can just write it for a set window size of 400 by 600 on my laptop screen. I'd highly recommend using Windows to prototype your game before trying to get it to work on Android.

Licensed User
Longtime User
Okay, I've figured out more of libGDX now. I've attached my first test version using it. It's not finished but should show how much smoother libGDX will run on different devices. Also, the graphics may scale better but I've not tested this yet.

Licensed User
Longtime User
I've just done an update while on the train. Find it attached: now has title screen and game restart.

Licensed User
Longtime User
andymc when restart back to title screen same flappy birds original? i m not in my home to test *-*

Licensed User
Longtime User
Yes, the game restarts when you tap after you die. I have found a problem with speed and scaling when I've testing it on different devices, this is now the next thing for me to fix.
Andy McAdam - www.coffeeinducedgames.co.uk
Download my games - https://play.google.com/store/apps/developer?id=Coffee Induced Games
YouTube Channel - https://www.youtube.com/channel/UCFKnTtteZxaVig_iAcBMYQg
You must log in or register to reply here.