Currently i am working on a project to capture fingerprint of the employees on a company, I was a bit afraid that because it was a Java library i could lose the project due to my lack of knowledge but with pure javaobject and a bit of inline java i was able to put a working project!

So far, the project shows this image (it is localized for english, spanish french and portuguese): 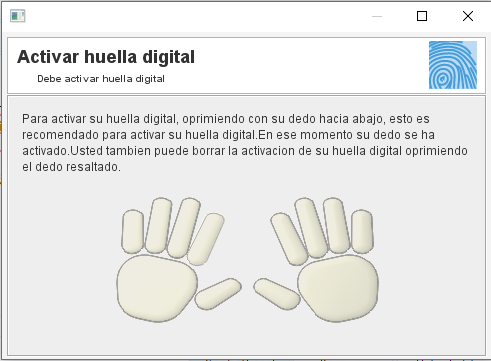 This form allows you to save finger template that it is translated into bytes so you can store it in your desired format (database, json, etc)

Then you can compare that template with your reader and the project will throw wheter it was a success or a failure.

The project i am working on has:


B4X:
B4X:
With this 2 you can successfuly enroll and verify the fingerprints, because the SDK is technically a 1 vs 1 verification, i had to create a system to verify a set of templates (a map) that is why it is returning a key.

Up to here, its what i need for my project, i may modify it later to wrap more features, but i tried to make it as simple as possible.

I will make the B4J Project donationware!

Whaaaat??? yeah sorry... it took me quite some time to implement and i had to buy the reader.

I can share with you the SDK (it is everywhere on the internet if you want to do it by yourself) the B4J project and may give you some tech support if you get stuck somewhere.

There is only a small glitch even when a fingerprint is succesfully compared the verification widget is shown as unknown, but because the event is raised, you can completly hide the widget and put yours.

Hi DonOso! technically yes! it depends on SDK and ARM, i have it somewhere, let you know asap.
was i helpful?

i confirm that there is a SDK for raspberry pi,
was i helpful?

Enrique Gonzalez R said:
i confirm that there is a SDK for raspberry pi,
Click to expand...

It's Donation Ware! You need to contact Enrique and ... Donate!

Hi enrique1, if you are interested you can contact me via DM. This post is a bit outdated i bought the latest SDK from digitalPersona (2018 SDK) and it is now a fully working solution.
was i helpful?

Licensed User
Hi. how to get this project and its resources?

if you are interested i can give it to you:
the library itself (for windows, linux both normal and arm based)
the b4j wrapper

i include an example on how to do it and a couple of hours for any question you may have regarding the library.
Last edited: Jan 16, 2020
was i helpful?

I cant find the sample code in c# for the Digital Persona Reader 5100.
Can you please provide me with that ? It would be much appreciated.

Ali Maqbool said:
I cant find the sample code in c# for the Digital Persona Reader 5100.
Click to expand...

Google search is working. You´ll probably not find any c# code in the B4X Forum.

Fingerprint scanning with DigitalPersona 4500 reader. How to get captured image and loading events handlers

I'm new to coding with biometric sensors and DLLs in C#. I'm using a DigitalPersona reader UareU 4500. I have read the API documentation and saw the sample program they provided. However, I´m not

stackoverflow.com
It is for another model but maybe it helps
Regards Manfred

Licensed User
Send me a dm and I will give you the instructions.
was i helpful?

Licensed User
I need it too, how do I do it?

Licensed User
Send me a dm
was i helpful?

Licensed User
hi, can this library be use with B4A also ?

Cnrez said:
hi, can this library be use with B4A also ?

Yes
was i helpful?

Hi, can you share me how to implement this in B4A?

Licensed User
Hi! It is a paid library. If you want more info send me a pm!
was i helpful?

B4J Question How to use an .ocx library?