I justed wanted to learn some basics of Games like Collision Detection etc. so I created this endless Runner App called "Gravity". 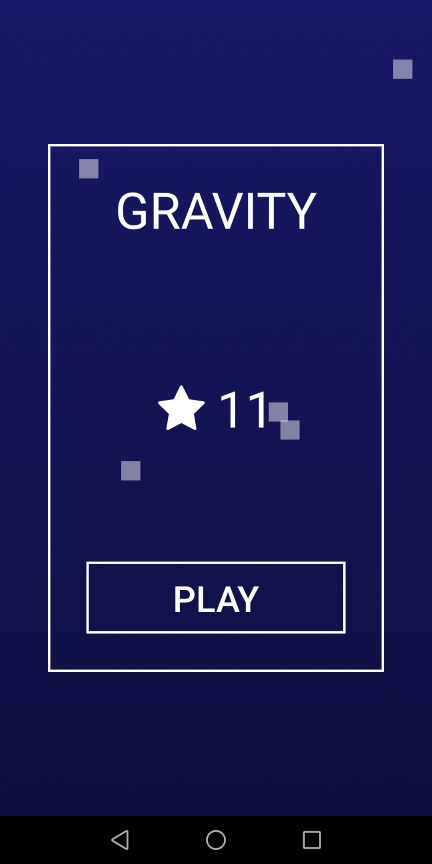 Maybe some of you can try the App and tell me what I can improve.
Click to expand...

Licensed User
Longtime User
It runs smooth, load quick and has simple easy to manage graphics. There's plenty of opportunity to add "juice", link at bottom of reply. But... I found it very hard to play, obviously you're better at it than a beginner as you've been writing it, but zooming out a little to give a little more time for players to react to incoming blocks would be good. Also, there's nothing to say what the controls are, maybe something at the start of a new game showing the controls would help, I know other games of this type use the same controls, but you have to allow for players who haven't played those, your game is separate to other games, so needs to be treated so.

Adverts, you've got too many, I saw more adverts than I did the game, I know you want to make money from your games, but you don't need to push that many ads, maybe add some randomness so it doesn't always show them, (i.e. if rand(1,6) = 3 then showad() ).

An online highscore board would be a good addition for the future, to encourage players to compete against each other.

Small bug, the music kept playing after I quit the game using the back button.

Is this written using LibGDX?

My Idea for the game was to make it pretty hard, but you're right ill add some explenation on how the game works to it.

I actually randomized the display of adverts but ill make it less possible for them to show up, I already noticed it when i played the game over the weekend.

Ill remove the bug & "add more juice" in the next versions, As I mentioned above - big thanks to you for reviewing it. Its really hard to get detailed reviews for me so this helps me alot to improve the game.
If you like my work, please cosider to DONATE

Licensed User
Longtime User
Hi, I'm always happy to give feedback on games. I play a lot of them and try to write my own. I've got a lot of good feedback from players of my own games so I use this as a basis to work on.
Did you use LibGDX or XUI2D?

I'd say one thing that might be good. Add some "screenshake" when the player dies, and allow a few seconds on the game over screen before the ad shows, it will feel much better. You could also change it so it offers a rewarded ad to keep playing or show an add on returning to the main menu.
Andy McAdam - www.coffeeinducedgames.co.uk
Download my games - https://play.google.com/store/apps/developer?id=Coffee Induced Games
YouTube Channel - https://www.youtube.com/channel/UCFKnTtteZxaVig_iAcBMYQg

Licensed User
Longtime User
@andymc sry missed your question, I havent used any kind of engine, its just views & a canvas. I wanted to do this to really learn the basics of collision, movement etc.
If you like my work, please cosider to DONATE
S

Licensed User
Longtime User
if you use admob you can configure it that it only displays interstitials once every x minutes without the need to change your code.

too much of them will probably cause a lot of uninstalls.
Did you appreciate my help here or on the chat? Maybe it's worth a small donation? Thanks in advance!
Try out my free games for Android & IOS | Free app promotion with Tappx​

Licensed User
Longtime User
Just a quick warning on ads, I once increased the ads in my games so it showed a lot more ads and I got several bad reviews. I did make more money, but at the cost of review score, so it's likely had I left the ads as they were then I would have likely lost my download numbers and lost money in the long term.
Andy McAdam - www.coffeeinducedgames.co.uk
Download my games - https://play.google.com/store/apps/developer?id=Coffee Induced Games
YouTube Channel - https://www.youtube.com/channel/UCFKnTtteZxaVig_iAcBMYQg

Licensed User
Longtime User
I've just released an Update for the App. It fixes all bugs I could find, shows way less ads and I added some more sounds and Animations. I'll add a Scoreboard in the next version.
If you like my work, please cosider to DONATE

Licensed User
Ehhhhm, i found a Bug in the App i Was wondering Where does the music come from? And i found out, that if i close the App the music Keep playing..
[B4X] AS Views Overview
You saved time and effort? You like what i do? show it with a small donation or with a coffee.

Licensed User
Longtime User
Quick question, might be a bug, but the game seems to add two points to my score when I die, is this expected?
Andy McAdam - www.coffeeinducedgames.co.uk
Download my games - https://play.google.com/store/apps/developer?id=Coffee Induced Games
YouTube Channel - https://www.youtube.com/channel/UCFKnTtteZxaVig_iAcBMYQg

@andymc It should add 1 to your score each time you pass an obstacle. Did it happen multiple times?
If you like my work, please cosider to DONATE

nobbi59 said:
It should add 1 to your score each time you pass an obstacle. Did it happen multiple times?
Click to expand...

on my phone the scores goes up only after the obstacle has passed the screen and not the player!
Free Sources: Link! (for learning purposes only)
Libs: App From | MST | Popup Menu | AppInfo | Gif Maker (B4i) | il_AudioPlayer | il_FilePicker
Full B4x Game (incl. source + tutorials): Link!
My Apps: Sagital Android | Ilan IOS | B4XPages Transition: Link!
(If you find my work useful please consider a small donation or buy me a coffee

nobbi59 said:
does the bug still appear? I wasnt able to reproduce it.
Click to expand...

i have tested it yesterday and the music stops, all is good
[B4X] AS Views Overview
You saved time and effort? You like what i do? show it with a small donation or with a coffee.

Licensed User
Longtime User
@ilan I found the bug why that happened & uploaded a fixed version. It was the same Bug that led to the bug @andymc wrote in his post.
If you like my work, please cosider to DONATE
You must log in or register to reply here.

Games Make games with me?