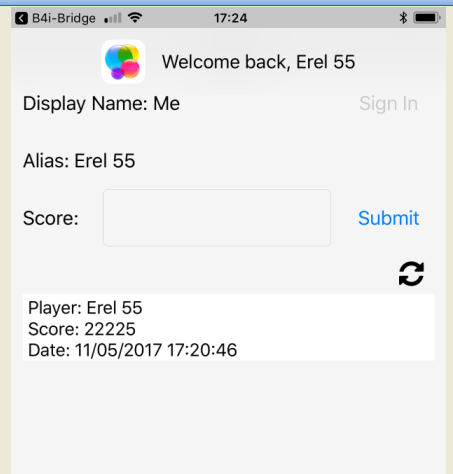 This service requires some configuration:
1. You must use an explicit app id (without wildcards).
2. Must use a development certificate and provision profile during development.
3. Add this line:

B4X:
4. An app record must be available in iTunes Connect.
5. Create a leaderboard: 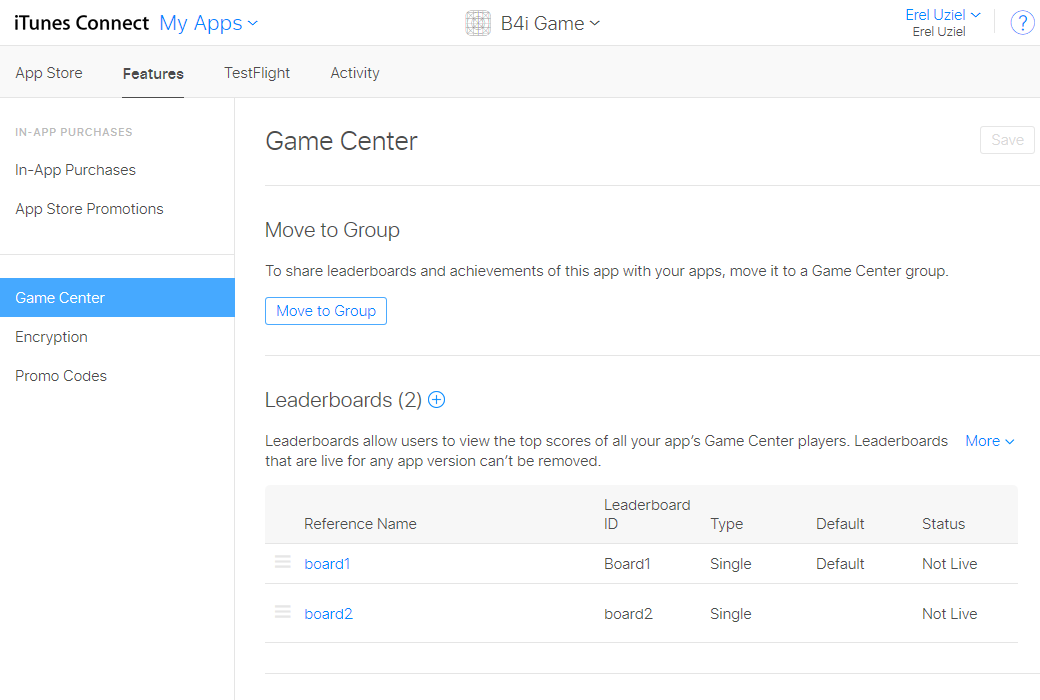 The code itself is quite simple. You should initialize the GKGameCenter object when the program starts.
The AuthenticationStateChanged event will be raised.
If ShouldShowDialog is True then you need to call Game.ShowDialog.

The AuthenticationStateChanged can be raised in other cases as well so assume that it will be raised and the state will change.

Once authenticated you can submit the current user scores and you can get the top scores.
See the attached example (make sure to change the board id as needed).

See code in post #8 for showing the built-in leaderboard dialog.

Licensed User
hi erel, i have a small problem. there is a part of your code that wont compile.

after i compile in debug mode i add those lines and click save then hit refresh and it works.
after i clean the project and try to compile again i get the error that it cannot compile

this is really weird

i comment those lines in debug mode, i add those lines manually and it works but then when i clean the project and compile again it doesn't compile


B4X:
but it won't compile if the project was cleaned.

i include the logs in a text file because its too long to add it to this post.

i need to mention again that if i compile after i comment those lines and then add them manually while my app runs in the foreground and click save i am able to receive the GKScore values. only if i clean the project or compile it in release mode it won't compile.

ilan said:
hi erel, i have a small problem. there is a part of your code that wont compile.
Click to expand...

It is fixed in v1.01 (attached to the first post).
[B4X] Features that Erel recommends to avoid
[B4X] "Code Smells" - common mistakes and other tips

Licensed User
hi again, i have a small question, please.
i see in all games that use gamecenter that they have the same view to show the hi score list.
i assume that it is a build in feature (dialog) of gamecenter. does b4i GameCenter support that dialog or will it support it in the future?

Licensed User
Hi Erel, lib is working great. i have implemented in my game. You can see it in action in the first post here:
https://www.b4x.com/android/forum/threads/space-defender-ultimate-ispritekit.85566/

i just have one problem. i was stupid enough to create the game with a wildcard app id and wildcard app id's do not support game center.
so i have created a new app in the store and uploaded the build to that non-wildcard app id. i doubt that Apple will approve it since the same game already exists but if they do, I will unpublish the first one and keep the non-wildcard app.

So for everyone that read this post DO NOT PUBLISH YOUR APPS WITH A WILDCARD APP ID if you plan to use Gamecenter or Notifications.
And even if not i don't see any advantage of a wildcard id then a non-wildcard id. so better use non-wildcard id and keep the possibility of adding services to your app in the future!

you were right erel, i have uploaded a new build with new certification and provisions file and it was approved.
its weird that both games were approved within few hours.
i have unpublished the second build and now the first is again active and has iGamecenter in it.

Licensed User
I am using my own leaderboard system that works with a generated code that can be used on multiple devices.
You can even use it on a mixture of android/ios devices to keep your scores in sync.

Yesterday the apple boys were nagging that I use a code to share data between devices.
They probably think I'm enabling payed features without using their in-app stuff so they're losing their cut.

While they scheduled a phonecall with me to discuss this I'm thinking it's maybe time to use their leaderboard system instead
and drop the idea of the OS independent global leaderboard that didn't rely on google play service (problem for some eastern countries) & gamecenter.

But I see these problems with the current B4i implementation and their leaderboard in general.

- my own leaderboard/ranking blends into the game lets call it theming. from what I see from @ilan's screenshot this is just a fixed top 7 page that pops up?
can we make our own and just pull in the data like position, score, name of the top 3, 10 ?

- when I submit scores I pull the rank and the score to reach to move up in the ranking. not sure if I can do this with gamecenter?

- my ranking page shows the top 3 scores and under that a list of your score and the 9 scores above you (or some above and under you if you're in the top 10).
can you pull a list like that from gamecenter?

- I filter out scores that haven't been updated for months (uninstalls?) if they suddenly play again they are back in place. I guess I can forget about this with game center.
It's rather useless to keep 10000 scores with only 500 playing.


or can I abuse the login feature of gamecenter and keep using my own system and replace the code with an encrypted version of the email used for gamecenter login?
Last edited: Jan 4, 2018
Did you appreciate my help here or on the chat? Maybe it's worth a small donation? Thanks in advance!
Try out my free games for Android & IOS | Free app promotion with Tappx​
S

Licensed User
I followed the turorial and got the app working.

But when I entered a nick name and submitted it the app crashed.

When I now start the app is gives "welcome nickname" and then crashes aswell.

This appears in the logs...


B4X:
Edit: I had to change this line to my own leaderboard ID > Dim sf As Object = Game.RequestScores("main")
Edit2: now the score submit crashed even when changing the boardid to my own
Edit3: now it always crashes
Last edited: Jan 4, 2018
Did you appreciate my help here or on the chat? Maybe it's worth a small donation? Thanks in advance!
Try out my free games for Android & IOS | Free app promotion with Tappx​

Licensed User
ok.
Did you appreciate my help here or on the chat? Maybe it's worth a small donation? Thanks in advance!
Try out my free games for Android & IOS | Free app promotion with Tappx​
S

Licensed User
The issue above was solved by an update on the remote builder servers.
Did you appreciate my help here or on the chat? Maybe it's worth a small donation? Thanks in advance!
Try out my free games for Android & IOS | Free app promotion with Tappx​
You must log in or register to reply here.