Here's an example how to generate a QR code containing a RSA Public Key (can be any data you need) in B4J and scan/load the key in B4A (based on the B4x QR code examples from Erel).

Some apps (like Threema) exchange encryption keys by scanning a QR code containing the key which is showed on the phone's screen of the person you want to add to your contacts. Benefit: It is not transmitted thru a network and kept secret.

For a better handling I've used B4J to display the QR code as it is easier for an example (otherwise you need two Android devices). 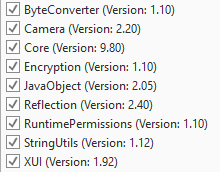 - a RSA Private/Public Key pair is generated
- the Public Key is converted to a Base64 string (from Bytes). "PubKey:" is added as a header (helpful to check later if the scanned code is containing a Public Key)
- a QR code is shown with the Public key

- the QR code scanner is initialized with "QR_CODE" only (so it's faster only scanning for QR codes) and is scanning the camera's live picture for a QR code
- If the content starts with "PubKey:" it's converted back to Bytes and loaded.

This is just a basic example. Use the search function if you need further details of RSA or other encryption methods and how to use them.

You can use any data you need to exchange. Just convert it to a Base64 string (if it's a Byte array).

Johan Schoeman said:
Where can I find the encryption library that you have used?
Click to expand...

Base64 and Encryption library

Licensed User
Thank you for the sharing, but I would love it if you can update this post for those who are trying to run the program.

A few things missing from the demo before you can run it.
1. Encryption library should had been included as part of the demo libraries.
2. BarCode scanning is required to be installed from SDK Manager
I heard this place has swags.
You must log in or register to reply here.

Android Tutorial Using RSA in B4A to communicate with PHP/OpenSSL