I followed same steps you provided to the member in this thread:

but they did NOT resolve my similar/related issue (re: application name displayed in Windows taskbar.

Note* I rubbed out my application name in screenshot, but did replace "OpenJDK Platform binary" with it for 'FileDescription' value. 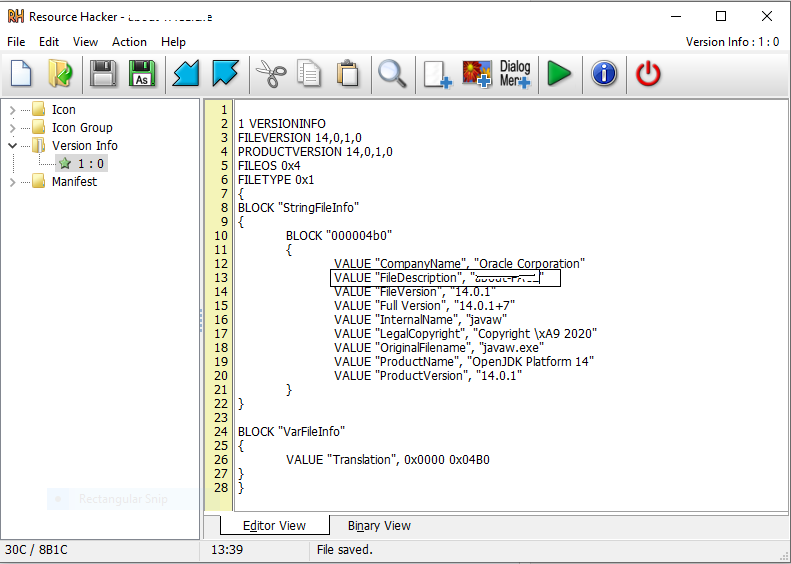 I then saved and copied the RH-edited EXE to my application installation path's 'bin' sub-folder (replacing original), but still get this in the Windows [10] taskbar when running root install folder's wrapper EXE:

So, not sure what I'm doing wrong. Any tips will be appreciated!

Thanks
Sort by date Sort by votes

Licensed User
Longtime User
Sometimes you need to restart your PC to get it to pick up the change.
Upvote 0

Staff member
Licensed User
Longtime User
I wasn't able to change this string. Note that resource hacker is a bit confusing. You need to click on the Play button to apply the changes.

I think that this string comes from somewhere else, though I haven't tried to restart the PC after this change.
[B4X] Features that Erel recommends to avoid
[B4X] "Code Smells" - common mistakes and other tips
Upvote 0
M

Licensed User
Longtime User
Thanks Erel. Note sure if pressing the Play ( |> ) button or the laptop restart I performed did the trick, but my RH-edited application name now displays in place of the undesired default.

However, when I start my application from its shortcut which I pinned to the taskbar, a second application icon displays in the taskbar (vs. getting the shaded box and underscore for the originally pinned icon). Further, if I pin that second icon instance to the taskbar, a shortcut is created for it that tries to open the bin folder's EXE instead. Both behaviors are obviously undesirable too.

An important point: I use the B4J 'Build Standalone Package' tool to build my application EXE, and then run its generated Inno Script Studio script file to build the application's installation setup.
Upvote 0

Staff member
Licensed User
Longtime User
The "real" executable is the one in the bin folder. The first executable is a small utility that launches the second (bin) executable with the correct configuration. The result is that if you create a shortcut to the running executable then it will not work (unless you modify its properties and set the arguments as needed).
[B4X] Features that Erel recommends to avoid
[B4X] "Code Smells" - common mistakes and other tips
Upvote 0
You must log in or register to reply here.

B4J Tutorial How to create a StandAlone EXE without the OpenJAVA (OpenJDK)... an update for your app..

B4J Question Java 8 or OpenJDK 11? Can we say what is better way?