On my Mac I have a folder on the Desktop called 'macserver-aa' and I have all the required files to run the B4iBuildServer in there.

I have used the terminal on the Mac to navigate to the folder and used the command: java -jar B4iBuildServer.jar

I then opened Safari on the Mac and was able to load the test page. (looks like it all worked)

However, I then rebooted my Mac and now the test page doesn't open.

Looks like I need to open the terminal and run java -jar B4iBuildServer.jar every time I reboot the Mac.

Is there a way to automatically start the Local Mac Builder without having to open the terminal every time I reboot the Mac ?
Sort by date Sort by votes

Staff member
Licensed User
Longtime User
You can create a script that runs after boot: http://stackoverflow.com/questions/6442364/running-script-upon-login-mac

I tried to make a auto run using a shell script..

Problem is that it seems to work except the icon up the top keeps moving around in a circle and when I click on it is shows 0% completed. Anyone know how to make it so it closes after it has been open. 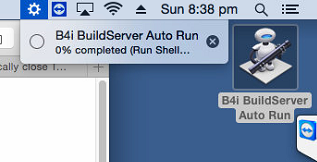 The script I am using is as follows:

Running the code I have above does work and it does start like it should, except for that icon in the title bar (as per my first image above). If I click on the cross (X) in that message it removes the icon from the title bar up the top and every is still working as normal.

However if I open the terminal on the Mac and manually run (type it in) the script as shown above it works as excepted and I don't see any icon in the title bar up the top.

Does anyone know what I have done wrong and why that icon doesn't go away after running the script ?

Staff member
Licensed User
Longtime User
The ampersand sign means that the command should be executed in the background. Do you also see this icon with the ampersand?
[B4X] Features that Erel recommends to avoid
[B4X] "Code Smells" - common mistakes and other tips
Upvote 0

Erel said:
The ampersand sign means that the command should be executed in the background. Do you also see this icon with the ampersand?
Click to expand...

This is one of my first times using a Mac, so I may of done it wrong so I created a small video that shows you what I did and maybe you can see something that I shouldn't of done and might be the problem.

(By the way I recorded this on my Windows computer and was logged into the Mac with TeamViewer, so you may see something's jumpy here and there)

Staff member
Licensed User
Longtime User
I'm not a Mac expert myself. If it doesn't work with the automator then you should follow Apple recommendation: https://developer.apple.com/library...stemStartup/Chapters/CreatingLaunchdJobs.html
[B4X] Features that Erel recommends to avoid
[B4X] "Code Smells" - common mistakes and other tips
Upvote 0
You must log in or register to reply here.