I received this email from Google today.
Will there be an update of Google Maps soon?

We're writing to let you know that starting January 2023 we are decommissioning versions 2.5 and lower of Maps SDK for iOS. This change will impact your users using app versions that were built with these SDK versions.

Starting January 2023, the Maps SDK for iOS v2.5 and lower will be decommissioned, affecting the app versions using them as their dependency. Your applications will receive SDK errors when using those SDK versions, and your end users may be affected.

You’re receiving this message because one or more of your projects has app versions in use running on the versions of SDKs that we are planning to decommission.

You may see a cost change when upgrading to a new version as an issue in versions 2.5 and lower prevented some use cases from being billed as expected. Pricing should match the rates indicated on the billing documentation.

To avoid service disruptions for your app users, make sure you provide an app version that was built with Maps SDK for iOS v2.6 or higher, and encourage users to upgrade to the newer apps before January 2023.

We always recommend our developers to keep up with the latest SDK versions in order to have access to the latest bug fixes, features and support. The latest version of Maps SDK for iOS can be found on the Release Notes page.

If you have not yet released a new app running on Maps SDK for iOS v2.6 or higher please do so by following the best practice of specifying version numbers in your dependencies:

Filippo said:
I received this email from Google today.
Click to expand... 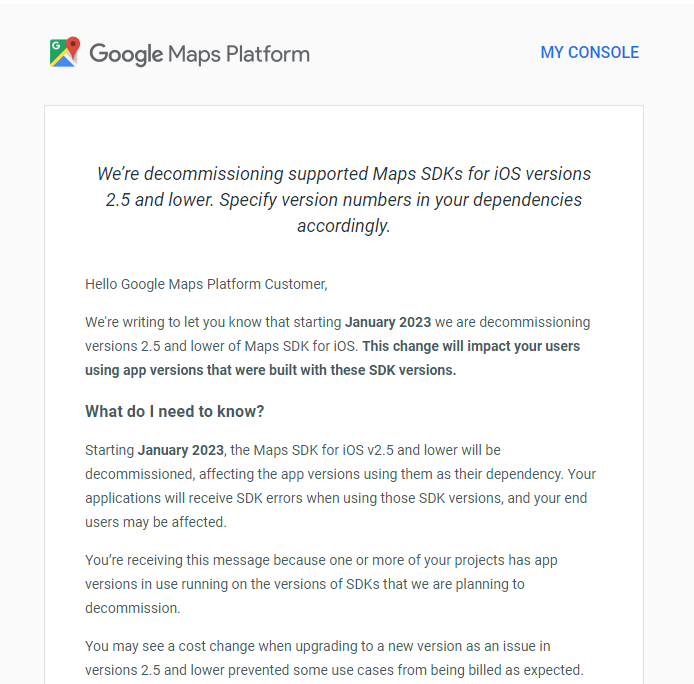 The iGoogleMaps library allows you to show a map inside your app: It is similar to B4A GoogleMaps library. 1. In order to use it you need to get a free api key from Google. Follow the "Obtaining an API Key" steps...

thank you very much for the quick update.
I have only one request. Can you put this link on the first page of the tutorial?

With the date of 2015, someone might think that it is an old link.