Licensed User
Longtime User
Hi My App that I am hoping will work on Mac as well as windows just displays an empty window on a Mac?
I say Mac its actually 2 Different VMWare Mmac images running on a PC! on Googleing i find that it is a problem with some versions of Java! Is this a problem anyone else has found?

Im hoping that the app would work on Mac, but I don't want to actually buy a Mac!

Also the second problem with it, once i have run it once, it will not run again i just get a file "hs_err_pid454.log" with an lots of error message!

Just looking for some pointers? Ie does it not work on VMware images? is it Java?

I have had someone try it on his Mac and he said it worked. But without an actual Mac im stuck!
Sort by date Sort by votes

Staff member
Licensed User
Longtime User
If you like you can upload the jar file and I'll test it on a Mac.
[B4X] Features that Erel recommends to avoid
[B4X] "Code Smells" - common mistakes and other tips
Upvote 0

Erel said:
If you like you can upload the jar file and I'll test it on a Mac.
Click to expand...

Hi Erel! Thanks for that, but i need to run it myself so I can figure out where some folders are! I can see where they should be on google, but i don't want to release a program that could break someones Mac! Im going to try and get it running on Linux, as that has a similar layout Filesystem wise!

But thanks anyway, I will take you up on the offer when its in a more working state!

And THANK YOU so much for creating such a wonderful SET of languages!

Erel said:
If you like you can upload the jar file and I'll test it on a Mac.
Click to expand...

Hi Erel, This is the Jar file of my app, it will not run on my emulators i cannot upload it as its 2.5meg (not sure why its that large to be honest!)

Can you just see if it runs on a Mac, - It works perfect on a PC 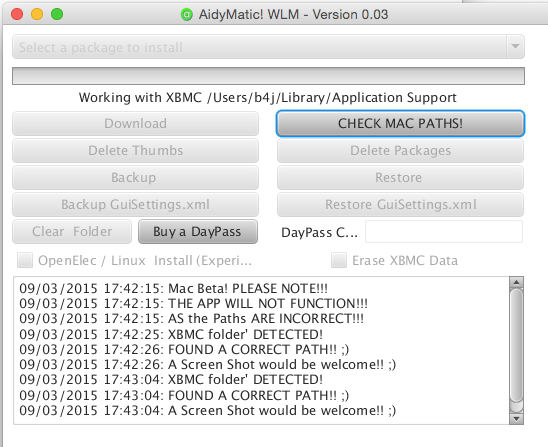 Why don't you use anchors? This way your layout will resize automatically.
[B4X] Features that Erel recommends to avoid
[B4X] "Code Smells" - common mistakes and other tips
Upvote 0

Why don't you use anchors? This way your layout will resize automatically.
Click to expand...

I don't use them because I don't know what they are!? But at least I can see its working! and it appears to have found your XBMC? (you do have XBMC installed don't you?)

Erel said:
Yes, was XBMC installed on this computer at one point.
Click to expand...

AIdy
Upvote 0
You must log in or register to reply here.

B4J Question How to get jar to run on Mac