Licensed User
something i discovered today. I got a MX10 android TV box today. Installed it, working.

There was no B4a-Bridge installed on the Mx10, neither i could activate the B4a-bridge on the Mx10
I tried to upload the app to the android mx10, the upload cycle wasnt completed.
Powered up the tele, and to my supprise i saw my app running waiting for input commands.

Funny, nice to have a extra device to test, i think Erel took a protocol for his b4a-bridge which is also implemented in the MX10?
note: the Mx10 ip only shows up when i select the tablet.... 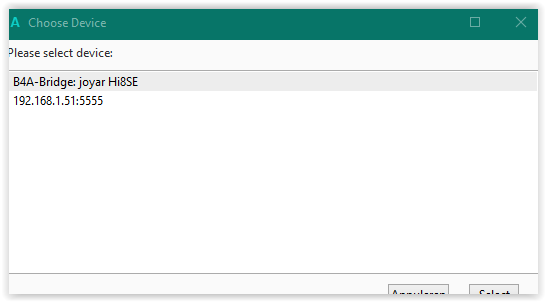 MbedAndroid said:
Funny, nice to have a extra device to test, i think Erel took a protocol for his b4a-bridge which is also implemented in the MX10?
Click to expand...

...or the MX10 staff took Erel's protocol to implement their own bridge?

Licensed User
I believe B4A will know about devices by what ADB finds on the network.
I provide Custom Hardware and Software Solutions - - - - - - - It would be greatly appreciated if you could click the Like button on any of my posts that were helpful to you

B4A TOP NEW USER TIPS: (the below are general tips and may not be related to the above post)
1) If webview is not working right, make sure you add the ChromeClient to it: https://www.b4x.com/android/forum/threads/viewing-a-video-in-realtime.118367/post-740808
2) If your app fails to install on a device or replaces another app, make sure that your app has a unique Package Name (In the IDE, select Project...Build Configurations...Package)