Android Question Urgent - Can't install anything with any way.

I am facing a problem. I can't install anything in B4A 9.00.
I get the following error:


B4X:
What I did is that I downloaded the SDKManager 3.35 and installed with it what was suggested. Tried to check the creation of a wear OS emulator - got an error saying Device definition not found: Wear OS Square - as seen in following image (I had installed the wear OS image) and tried to install the china wear OS image also to see if it will work. It didn't. 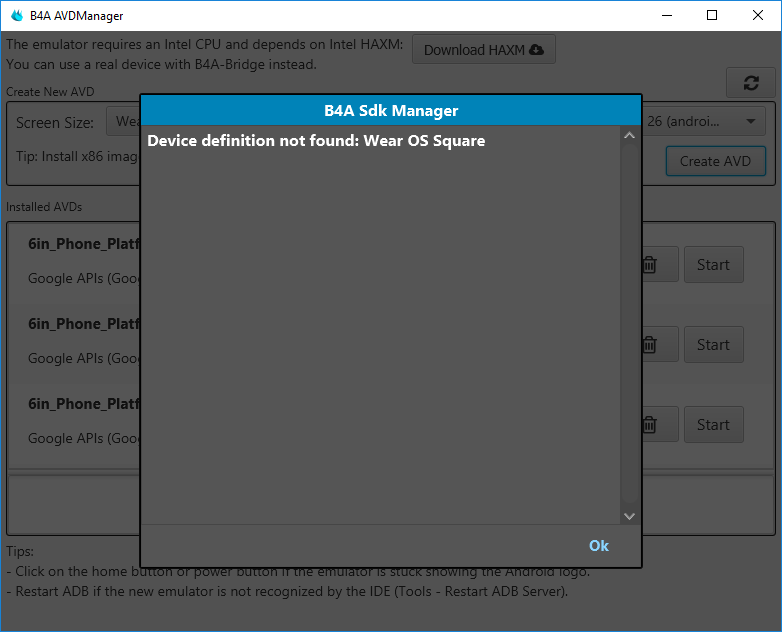 This might not be the case though. What I did next was to create a program to check if my phone has been hacked because I would like to check if notifications are automatically deleted. So I created a program with notification listener and TTS to speak notifications to me and tried to install it. Immediately my computer started to go nuts and the hard disk started to work continuously and I was unable to install it. I pressed the compile though and the process timed out (3 times that I tried). I decided to wait for my hard disk to calm and when I tried to install the program it seemed that the program was installed (but it did not function as expected) but I never got the message of successful installation from B4A. I tried again and again and B4A has stack in the installing to device and timed out all the times. I rebooted the phone and the same thing happened. I rebooted also my computer and since then I get all the times the previous message in code part.

What may have gone wrong? Wicked phone, wicked computer or totally wicked hackers that do not deserve to be called humans?


Edit: I also tried with B4A Bridge - no luck
Last edited: May 9, 2019
DHQI.gr Nikolaos Hatzistelios - Add In App Purchases to both your B4A & B4i apps ON THE FLY - Click here

Licensed User
Longtime User
I still have no luck. I deleted the SDK totally and reinstalled it but no luck.
DHQI.gr Nikolaos Hatzistelios - Add In App Purchases to both your B4A & B4i apps ON THE FLY - Click here

Licensed User
Longtime User
Sounds like you did not setup your SDK correctly. Or you did not configured the IDE correctly to use the new one.

You can find the Setup-Instructions here. https://www.b4x.com/b4a.html
You also can watch this Video as it describes it clearly.

Start with a new Blank folder like you see in the Video.

Alternatively you can use the ReadyToRunSDK
Last edited: May 10, 2019
Regards Manfred

If you find my answer useful please click on like. You can even Donate with PayPal
Multipart Fileupload b4A->PHP | Create PDF | Create dynamic JPG | My Libraries (Overview)
Upvote 0
You must log in or register to reply here.

M
Android Question Getting back into B4A...urgent issue.