Creating a live wallpaper is not too difficult.

LiveWallpaper library contains two objects: LWManager and LWEngine.
LWManager is responsible for raising the events.
The first parameter of each event is of type LWEngine. LWEngine represents a specific wallpaper instance.
LWEngine includes a Canvas property which is used to draw the wallpaper.
When you finish drawing you must call LWEngine.Refresh or LWEngine.RefreshAll. Otherwise the drawing will not appear.

The following example draws a blue background. Red circles are drawn when the user touches the screen: 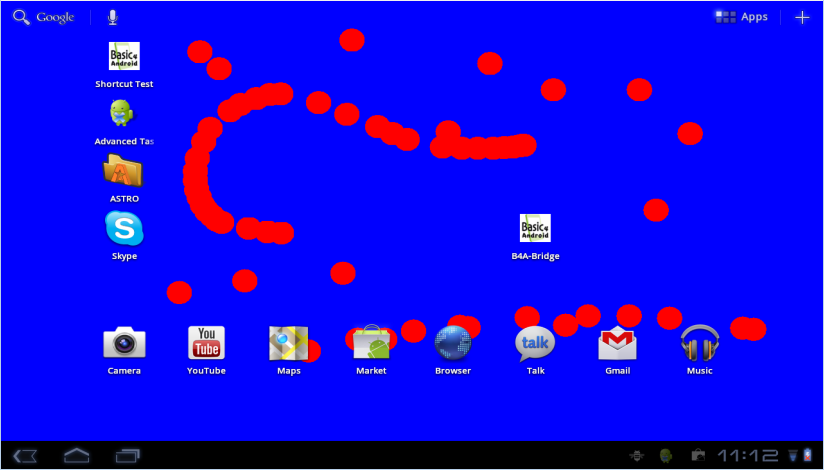 As there could be several different engines, it is convenient to work with the local engine.
LWEngine includes a Tag property which you can use to store data specific to that engine.

LWManager includes an internal timer that you can use if you need to do animations. The Tick event will only be raised for visible wallpapers. This is important to conserve battery.

For example the following code draws the time on the wallpaper: 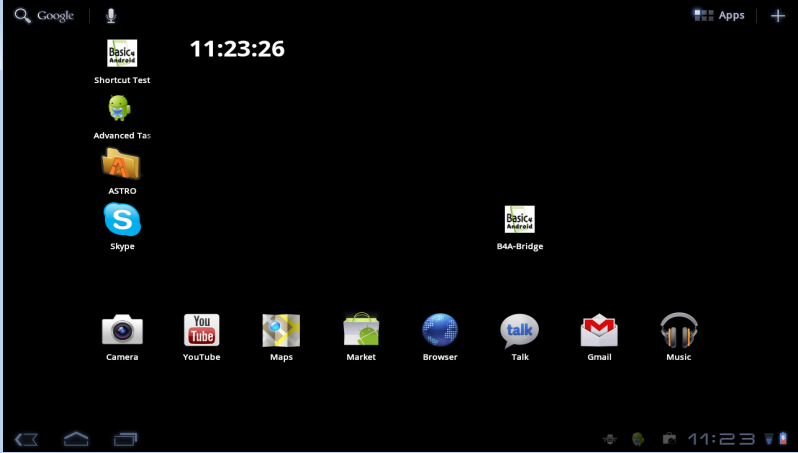 Offsets
On most devices the wallpaper virtual size is wider than a single screen. When the user moves to a different screen the offset changes.
You can use the OffsetChanged event to handle those changes.
LWEngine.FullWallpaperWidth / Height return the full size of the wallpaper.
LWEngine.CurrentOffsetX / Y return the current position.
Note that the wallpaper scrolls less than the foreground layer with the icons.

The LiveWallpaperImage demonstrates how to use those properties to display an image over the full wallpaper.

Configuration
Live wallpapers require some configuration.
1. You should add the inner service declaration to the manifest editor (Project -> Manifest Editor):

B4X:
It is also recommended to change minSdkVersion to 7 (at the beginning of the manifest editor code).

2. Add wallpaper.xml to Objects\res\xml folder and set it to be readonly (otherwise it will be deleted during compilation).
You can find this file in both attached examples.

3. Your service must be named WallpaperService. Note that there is an additional service inside the library named anywheresoftware.b4a.objects.WallpaperInternalService. The internal service connects to your service.

Examples
LiveWallpaperImage - The user can select an image from the activity. This image is set as the wallpaper. When the user changes the wallpaper offset the image is updated accordingly.

LiveWallpaperBall - A bouncing smiley. Clicking on the smiley will change its direction.
Before running the examples you need to set Object\res\xml\wallpaper.xml to be readonly. Otherwise it will be deleted.

Note that it is recommended to test live wallpapers in Release mode (the wallpaper will fail in debug mode when the process is started by the OS).

Licensed User
Longtime User
Great! It seems not so difficult. Thanks Erel.
I'm not good at English, please understand. Thank you.
S

Generating R file. Error
AndroidManifest.xml:33: error: Error: No resource found that matches the given name (at 'resource' with value '@xml/wallpaper').
Click to expand...

I'm not good at English, please understand. Thank you.
S

Add wallpaper.xml to Objects\res\xml folder and set it to be readonly
Click to expand...

I'm not good at English, please understand. Thank you.

Staff member
Licensed User
Longtime User
I see, the readonly property of wallpaper.xml is removed when it is zipped. I've added a comment about it in the first post.

You will need to unzip the project again and set wallpaper.xml to be readonly.
[B4X] Features that Erel recommends to avoid
[B4X] "Code Smells" - common mistakes and other tips

I'd like to second this sentiment. Thanks again, Erel, you've made my week! :sign0060::icon_clap:

Staff member
Licensed User
Longtime User
Thank you. It is great to see that you find it useful.

As I wrote in some other thread, this library was pretty difficult to develop as it required a different design than other libraries.
[B4X] Features that Erel recommends to avoid
[B4X] "Code Smells" - common mistakes and other tips

Erel said:
Thank you. It is great to see that you find it useful.

As I wrote in some other thread, this library was pretty difficult to develop as it required a different design than other libraries.
Click to expand...

I think you'll find that it was worth it. Once the word gets out that B4A can finally do real live wallpapers, I'm willing to bet that sales jump. I'm very confident that this will be a very popular library.

Licensed User
Longtime User
Master EREL ; I do not want to bother you, but is it possible to add a preference in a live wallpaper ?

In my example i have done a rotating bouncing and zooming text, can the user set he's text when he choise the live wallpaper ?

Staff member
Licensed User
Longtime User
Yes, it is possible.
You have two options:
- You can update the live wallpaper from a regular activity as done in LiveWallpaperImage.
- You can also add a special settings activity and then the user will have a "settings" button in the preview screen.
You should edit wallpaper.xml and add the full activity name:

Erel you know ? I can not say enough... You are really a MASTER )

I have drop java learning since livewallpaper lib out ))))

Staff member
Licensed User
Longtime User
You must also save the text in a file, and read this file when the service is created. See LivewallpapaerImage example.
[B4X] Features that Erel recommends to avoid
[B4X] "Code Smells" - common mistakes and other tips

3. Your service must be named WallpaperService. Note that there is an additional service inside the library named anywheresoftware.b4a.objects.WallpaperInternalServ ice. The internal service connects to your service.
Click to expand...

For my app, i'm going to need multiple LiveWallpapers, is it possible that we can have more than one LiveWallpaper in 1 app? :s
Do I have to modify things in the Android Manifest then?

I also updated my LiveWallpaper where users are able to load gif files and display them as their animated wallpaper.

Staff member
Licensed User
Longtime User
You can only have one wallpaper service in your application. However you can configure it to show completely different wallpapers.

Licensed User
Longtime User
Can I add Panel, ImageView... to LiveWallpaper?
I'm not good at English, please understand. Thank you.


Gigatron said:
Erel you know ? I can not say enough... You are really a MASTER )

I have drop java learning since livewallpaper lib out ))))

DITTO. Live Wallpapers (or the previous lack thereof in B4A) are what had me sinking far enough into the depths of despair that I was in the process of giving up on B4A and loading up Eclipse ("Eclipse", as in never seeing daylight) and pulling out all my unread Java books and CBT, grumbling my way into going the "crash course" route so I could produce LWPs.

This new Live Wallpaper library has totally rescued me from that ridiculous curly braced hell (no offense, but I absolutely HATE Java and anything resembling C++ :BangHead.

Erel - again, my most profound thanks. :icon_clap:

PS: I knew this would be a popular library. This is the library that will ensure B4A sells well.

Licensed User
Longtime User
I too was considering loading up that horrible eclipse program to do a LWP. I have to say, this library is extremely easy. I can't wait till the program manages all the XML stuff on it's own though.
You must log in or register to reply here.