The first part of this tutorial can be found here: http://www.basic4ppc.com/forum/basi...-gameview-create-2d-android-games-part-i.html

GameView features were described in the first part. GameView handles only the drawings. The logic and sprite management are done in Basic4android code.

The attached project includes several classes that you can use in your game to help with common tasks:

Both SpriteAnimator and CollisionDetector have a Tick method which you should call on each tick.

GamePad - A multitouch game pad implementation made of two joysticks. This is an improved version of a previous GamePad implementation. It works with GameView and provides better performance.

GameUtils - This is a code module with currently two features: scale calculation and a method to load sprite sheets.

These classes should be a good base for further customizations as needed. 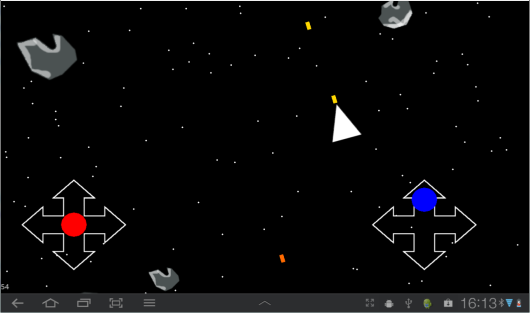 The asteroids game example demonstrates the usage of these classes.
The game is quite simple. You move the ship with the left joystick and shoot the asteroids with the right joystick. Hitting an asteroid will crash the ship.

This project depends on three libraries: Audio, GameView and Gestures.
It should scale correctly on all devices.
As it is based on GameView is works on Android 3.0 or above. It can work on lower versions without hardware acceleration. The minimum target version in the manifest editor was set to Android 3.0.

Please feel free to ask any question about the code.

Licensed User
Longtime User
This is brilliant work, thanks Erel!

Another good step in the direction for B4A to be used for fast moving games as well as apps.
Andy McAdam - www.coffeeinducedgames.co.uk
Download my games - https://play.google.com/store/apps/developer?id=Coffee Induced Games
YouTube Channel - https://www.youtube.com/channel/UCFKnTtteZxaVig_iAcBMYQg

Staff member
Licensed User
Longtime User
Thank you andymc. I recommend all developers who are interested in building 2d games to download this one. The performance of GameView is really great. The movement is very smooth.
[B4X] Features that Erel recommends to avoid
[B4X] "Code Smells" - common mistakes and other tips
V

How do I end this Gameview.

What is the Code for it??

Staff member
Licensed User
Longtime User
What do you mean with "end this Gameview"? Nothing will happen if you won't call GameView.Invalidate.
[B4X] Features that Erel recommends to avoid
[B4X] "Code Smells" - common mistakes and other tips

I'm dissecting this example to learn how to manage the sprites. I would be very useful to have controlled each of the sprites that are "alive", for example, to give one of the asteroids and a distinct personality that moved in a continuous motion elliptical. Actually in this case would not make much sense, but it would be very useful for example to control small groups of soldiers shaped sprites or warehouses. Do you remember the Galaxian and as alien ships fell with a certain path?

I think that would be necessary for both. First have controlled what the sprite is going to have a given path, and second, to know how to tell the program the "equation" of the trajectory.

How could indicate different paths to each piece of asteroid? Could you put a small example that illustrates this?

Staff member
Licensed User
Longtime User
SpriteAnimator is responsible for the sprites movement. You can create a copy of this class that moves the sprites in a different way and assign it to one of the asteroids.
[B4X] Features that Erel recommends to avoid
[B4X] "Code Smells" - common mistakes and other tips

Licensed User
Longtime User
Ok, I will try that.

Licensed User
Longtime User
Sorry to insist, but how could have identified each of the live objects? Could at all times know that spriteanimator sprite is being processed? It may be a silly question ... but do not see it.

Licensed User
Longtime User
From memory the asteroids in the demo are held in a list so you have asteroids 0-4. Each one is passed to the sprite animator that adjusts its position. You could pass another value to the animator and use that with a select to have different movement for objects.

Staff member
Licensed User
Longtime User
There all kinds of possible solutions. You can add a "name" field to the Asteroids class or you can use a Map instead of list.
[B4X] Features that Erel recommends to avoid
[B4X] "Code Smells" - common mistakes and other tips

Licensed User
Longtime User
Thank you both, with your advice I have made ​​progress in the game I'm programming.

How could I put a small text beside each asteroid that could put, for example, the X and Y position in which he is, or anything else, for example the number of impacts that have received?

I think I have no trouble controlling both the X and the Y or the number of impacts, but do not know how to put a text in a specific position within a GameView and it can move freely.

Staff member
Licensed User
Longtime User
You can add additional sprites that will be made of bitmaps that hold the text.
[B4X] Features that Erel recommends to avoid
[B4X] "Code Smells" - common mistakes and other tips
A

Licensed User
Longtime User
Hi,
I have this error when I try to compile this example:

The Gesture library is correctly installed.
How I can fix this error?

Staff member
Licensed User
Longtime User
Make sure that the Gestures library is checked in the libraries tab.
[B4X] Features that Erel recommends to avoid
[B4X] "Code Smells" - common mistakes and other tips
A

Erel said:
Make sure that the Gestures library is checked in the libraries tab.
Click to expand...

I'm going to try and implement the Game View library into a game shortly. I just need to improve on my gfx making skills in Photoshop and away we go.

I promise to try and not ask too many questions.

Thanks for the library Erel, and to everyone for the support in advance...
Simply Invoice

do you have plans to expand these classes? Such as adding new layouts to the gamepad class for having say one joystick and then some firebuttons, instead of just two sticks?
Andy McAdam - www.coffeeinducedgames.co.uk
Download my games - https://play.google.com/store/apps/developer?id=Coffee Induced Games
YouTube Channel - https://www.youtube.com/channel/UCFKnTtteZxaVig_iAcBMYQg

Staff member
Licensed User
Longtime User
It shouldn't be too difficult to modify the GamePad class code and change one Joystick to 4 buttons. Try to modify it and if you need any assistance then start a new thread and I'll help you.
[B4X] Features that Erel recommends to avoid
[B4X] "Code Smells" - common mistakes and other tips
You must log in or register to reply here.