Licensed User
Take a loot at @alwaysbusy's ABMaterial.
B4XPages is the most important new feature since the Resumable Subs.

Ajws said:
I like B4A, but it is a pity there is no version to develope a website. will there be any future?

You can look at webapp of B4J. It is a bit tricky though to set it up. I tried recently for a reason to set up a B4J webapp to be seen through the internet with port forwarding but I had no luck with it. But maybe this is just for me and it is not the law.
DHQI.gr Nikolaos Hatzistelios - Check our DHQI Video Voicer app for creating voiceovers for video presentations of your apps

hatzisn said:
You can look at webapp of B4J.
Click to expand...

https://www.b4x.com/android/forum/threads/webapp-web-apps-overview.39811/
B4XPages is the most important new feature since the Resumable Subs.

Luca you are one hour behind us and yet you are awaken. What are you doing up at this time? Hard work or too much coffee? Vai a dormire...
DHQI.gr Nikolaos Hatzistelios - Check our DHQI Video Voicer app for creating voiceovers for video presentations of your apps

hatzisn said:
Luca you are one hour behind us and yet you are awaken. What are you doing up at this time? Hard work or too much coffee? Vai a dormire...
Click to expand...

I slept from 1 am until half an hour ago.

I'm answering a few members then... I will build the most profitable app ever developed with B4X (and with any other tool, but these are worse, you know )
B4XPages is the most important new feature since the Resumable Subs.

LucaMs said:
I will build the most profitable app ever developed with B4X
Click to expand...

We all want to know when this is going to happen as it seems to be the story of your life (read the last few years)
Did you appreciate my help here or on the chat? Maybe it's worth a small donation? Thanks in advance!
Try out my free games for Android & IOS | Free app promotion with Tappx​

Licensed User
Also check out my other Web Library BANano, it may better suit you: https://www.b4x.com/android/forum/t...-library-with-abstract-designer-support.99740
Become a patron at https://www.patreon.com/alwaysbusy or

Licensed User
Hi Alain,
is it correct to see ABMaterial and BANano "optimized" for the following distinct tasks?
ABMaterial
Most useful for real webapp applications; the equivalent of a desktop application, but running on a remote server (over LAN or Internet). Reccomended for complex websites too (see below)
BANano
Most useful for simple webapps where some interaction with the user is required (this will happen in the local browser) and to construct common, regular websites.
I mean websites more similar to a shop window than those able to offer interactive services like shopping carts, enrollment in associations etc.

Although I never used any of them, I kept reading threads about both so I know for sure they are top quality products!
PER ASPERA AD ASTRA (lat. "reaching success through difficulties")
Do you find my contributions useful? LIKE them, or even better, donate.
No donation is too small, no donation is too big.

Licensed User
Well, the difference is becoming more blur with each release

The latest version of BANano introduced the BANanoServer.b4xlib library, which is an easy to use wrapper around jServer, the same lib ABMaterial uses. And all the 'powerful' stuff like caching etc ABM has is also used in this library. So, I don't think there isn't a thing BANano can't do that ABM can. One can use BANano to make stand-alone Web sites, but also interfaces for e.g. IoT and Raspberry Pi (when using the BANanoServer lib: as this is a normal B4J app, it can use all B4J libs on the server side) and complex Web Apps.

In ABM, all components are pre-written by me using the Materialize CSS framework. In BANano you write your own wrapper around whatever CSS framework (Bootstrap, Skeleton CSS, Webix, ...) you want to use (or use one already written by users on this forum). In BANano you can use the Abstract Designer (if the CSS framework lib wrapper uses Custom Views). This is something ABM will never be able to do.

With BANano you can make Progressive Web Apps (stand-alone), also impossible to do with ABM.

ABM is extensively tested and used in the company work for in my day job: we do job registrations with an own developed barcode scanner and the complete 'user interface' is written in ABM. I have written a lot of 'base' code in ABM for this project (like e.g. we do not use combos, but sidebars instead. Each 'page' has the following structure:

And then I wrote several Filters, Sidebars, Modal Input forms and tables that, when I have to create a new page, just plug & play can use.

An example of the page to see all the scans and make changes/add manual: 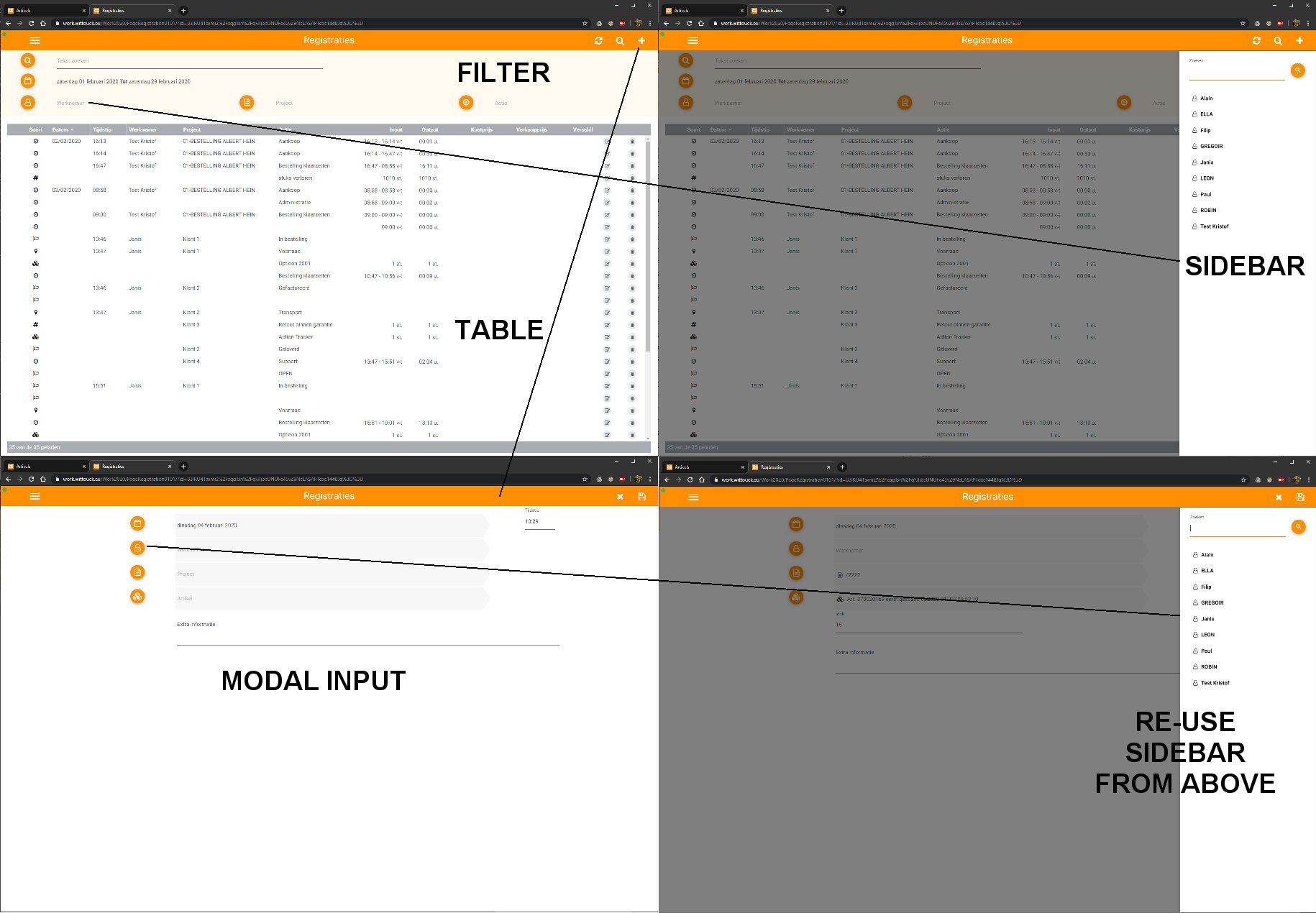 Also the reporting and Import/Export modules:

And many other page types, using custom components:

I discussed the future of my Web Libs with Erel last year, and we both agreed BANano is the lib for the future, as programming for it is a lot more like using one of the other B4X products. And it has a far less steep learning curve than ABM does for newbies. But in power, it equals what ABM can do.

Erel also asked me to now write a 'tutorial' demonstrating the power of BANano so the next step for me is doing this. I will write a real-life complete PWA from the ground-up and make it a whole series on the forum.

I personally consider both frameworks to be able to do the same tasks and programs.

Alwaysbusy
Last edited: Feb 4, 2020
Become a patron at https://www.patreon.com/alwaysbusy or