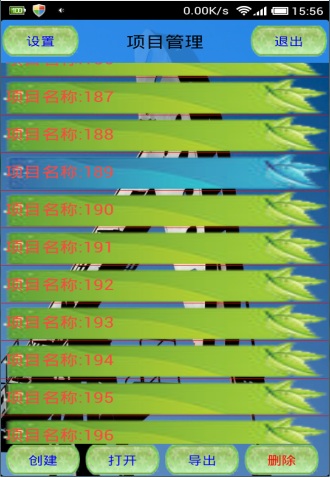 icefairy333 said:
sorry I can't understand you...
Click to expand...

When a Twoline item tapped it should be highlighted. But it's not.
SingleLine item is highlighted OK when tapped.

Can you add a functions like
ScrollToItem(Position/ItemID) to scroll without selecting, or
SetSelectionCenter2 that selects and scrolls that the item is about the middle of the visible list if possible.

Also would be of great help for advanced features to have something like GetScrollPosition. Plus a possibility to change SelectedBackground during runtime would be great (invalidate does not work; SetData does but has some visual sideeffects and probably not recommend anyway)
Z

Licensed User
Longtime User
Hi,
I'm using your library and it is great, but when I'm using the ItemLongClick event I get

B4X:
in the code I just use log("test") in the event!
App icon design | Flat UI pack

Licensed User
Longtime User
Had this issue when using this library.
I wonder if you use multiple mListViews. if so, does this happen on all ListView views?
Btw, are using regular ListViews too?
Z

Licensed User
Longtime User
I'm using 2 mListViews and it happened on both od them, and no i'm not using regular ListViews
App icon design | Flat UI pack
B

Licensed User
Longtime User
Is it possible to integrate RichStrings for more color and formats in mListView?
Then mListView would be perfekt!

Licensed User
Longtime User
I have some problem with this ListView.


B4X:
I expect that the value is the same as p (of type Panel) but when I look into the debugger it is anywheresoftware.b4a.BALayout@419e5e90

The program crashes in ItemClick because value is not of type p.

If you add a header using this library, tapping on that header causes the following error.
java.lang.ArrayIndexOutOfBoundsException: length=12; index=-1.

@icefairy333 tap on the header in your own example that you included in your first post, your example also crashes when tapping on the header .

Tapping on the footer does not cause any issues, only tapping on the header causes an issue in the _itemclick event.

Peter Simpson said:
your example also crashes when tapping on the header
Click to expand...

i saw that lib. and i tried with no success.

One more reason for the requirement i created in the last months... my wish to extend b4a

I just told lemonisdead something about that subject

i just past it here. You are maybe interested in this too
----------- snip -----------------------------
So i came into first contact to java and Android programming. Tried to get rid of developing andoid app with eclipse in java,,, THREE WEEKS with NO success....
Then i found B4A and tried the demo and within three days i had a first release for that app. I FELL IN LOVE INTO B4A
To finish the released app (in google in beta-stadium to be not public) i needed 4 weeks. Two apps and a addition in our software (see above). After that i dont need to write apps for our company. Just this... All i did here in the forum the last two years i did cause i was in love in b4a. In the REALLY HELPFUL community... B4A is my Hobby now you can say.
I learned a lot, i tried all Example in the forum. ok, maybe not ALL ;-) But lot of them. I learned from the examples and wrote one or two (maybe more (3092 )) posts here in forum to help and give something back for the suppport i earned. Or the support i SAW that someone got here in forum (Erel,NJDUDE,TDS,Wrwound, Informatix and so one.... They all gave great support. I i love that.... And i got a lot of likes too. I like that too
So i was on the hunting on everone on the "Noteable Members" list.... I´m 3rd in likes i think )))))))))
I also found some new friends here (you included)
So. I gave something back to community. Then, when times goes by and i fall deeper and deeper in love with b4a and due to this i feel the requirement (for me and for the community which can use such a really great Developmentenronment).... i feel the requirement to Extend B4A... All i could do was to give good advices in forum...
It gave a good feeling. But later that was "not enough"... "I WANT EXTEND B4A!"
End of September 2014 i wrote a mail to erel asking him whether he can give me the source of Dropbox-Sync-Library. I wanted to give additions to this Library.
I got the Source from Erel and started learning java to extend this library.
You know what is today
UFF... That was much to type. I hope it is not boring to read all that shit
Last edited: Feb 19, 2015
Regards Manfred

If you find my answer useful please click on like. You can even Donate with PayPal
Multipart Fileupload b4A->PHP | Create PDF | Create dynamic JPG | My Libraries (Overview)
I

Inman said:
This is a nice library. The SelectedBackground feature itself is worth switching to this.

But currently, when I longpress an item, the background color is Holo Blue. Is it possible to change it?
Click to expand...

Revisiting this request after 1.5 years. With Android 5 Material Design, things have gone even bad. On Android 5 devices, the hover color is grey while on 4.x devices it is Holo Blue. So much inconsistency.

It would be great if we can somehow set the drawable for longpress (or at least set it to Null so that it doesn't show up). There is a method discussed here to achieve this via XML, by overriding ItemBackgroundHover.

Wish we could do this on B4A.

Licensed User
Longtime User
Hello icefairy333,
is it possible to make a Update for the great mListview with functions of the new native ListView?

Thank You
Franz
You must log in or register to reply here.