I have added polar value interpolation to speedy spline.

This takes angles in the range -180 to +180 with an assumed magnitude of one, transforms these into their x (real) and y (imaginary) components interpolates the x vector values and y vector values separately then calculates the angle using atan2(y/x).

Doing the interpolation this way resolves the problem of interpolation where values straddle the circular boundary +/- 180 degrees.

Interpolated in the Cartesian domain this is approx:

Note the 0 value which wouldn't make much sense if this were wind direction.


Whereas in the polar domain this is approx:

The screenshots below show the difference in the calcs for compass reading that straddle the 0/360 degree boundary. 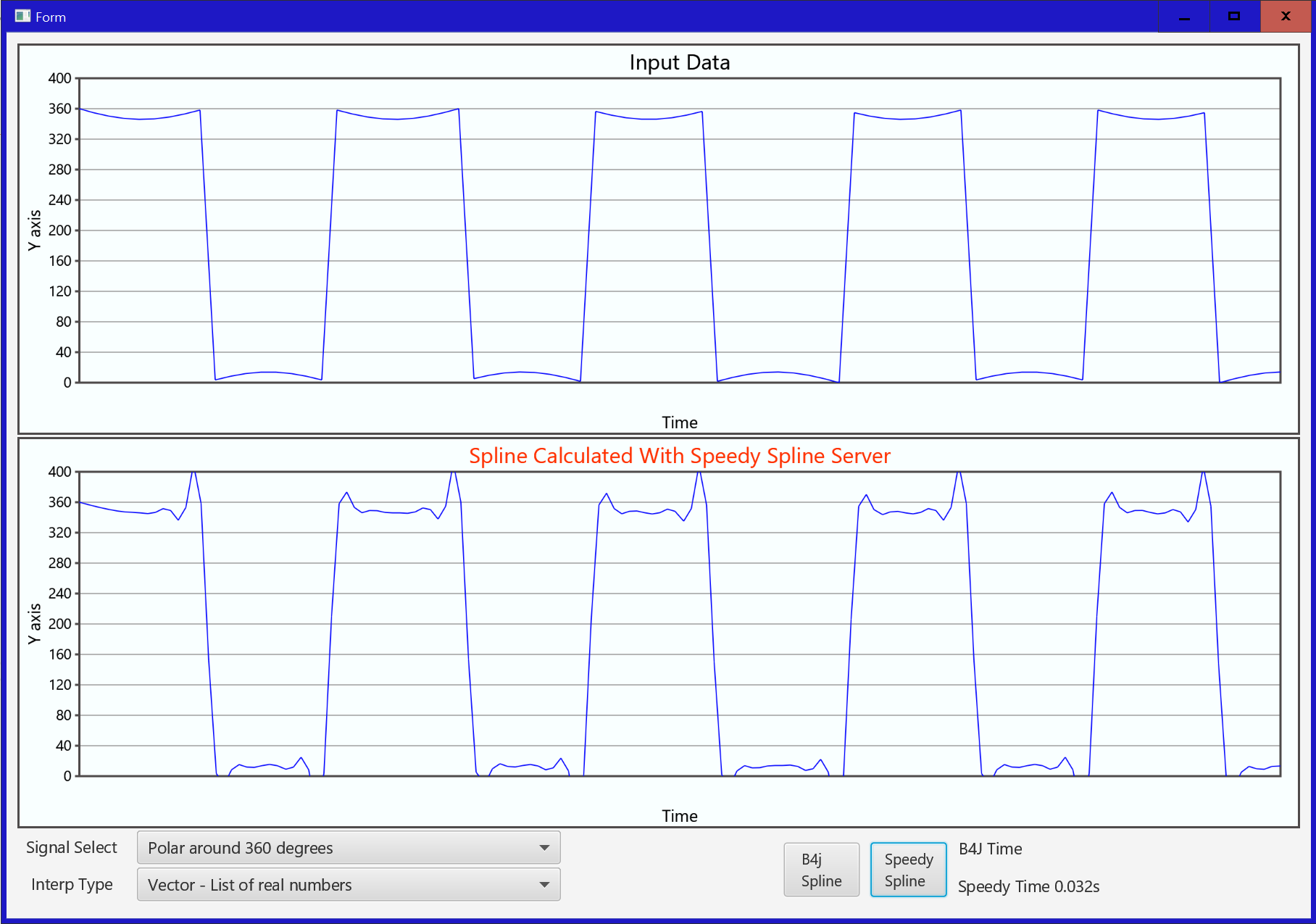 You can see in the first one using just the vector of angles (not polar) the interpolation ends up a bit of a mess with negative angles and angles greater than 360.

The second one below uses polar interpolation and does the job. 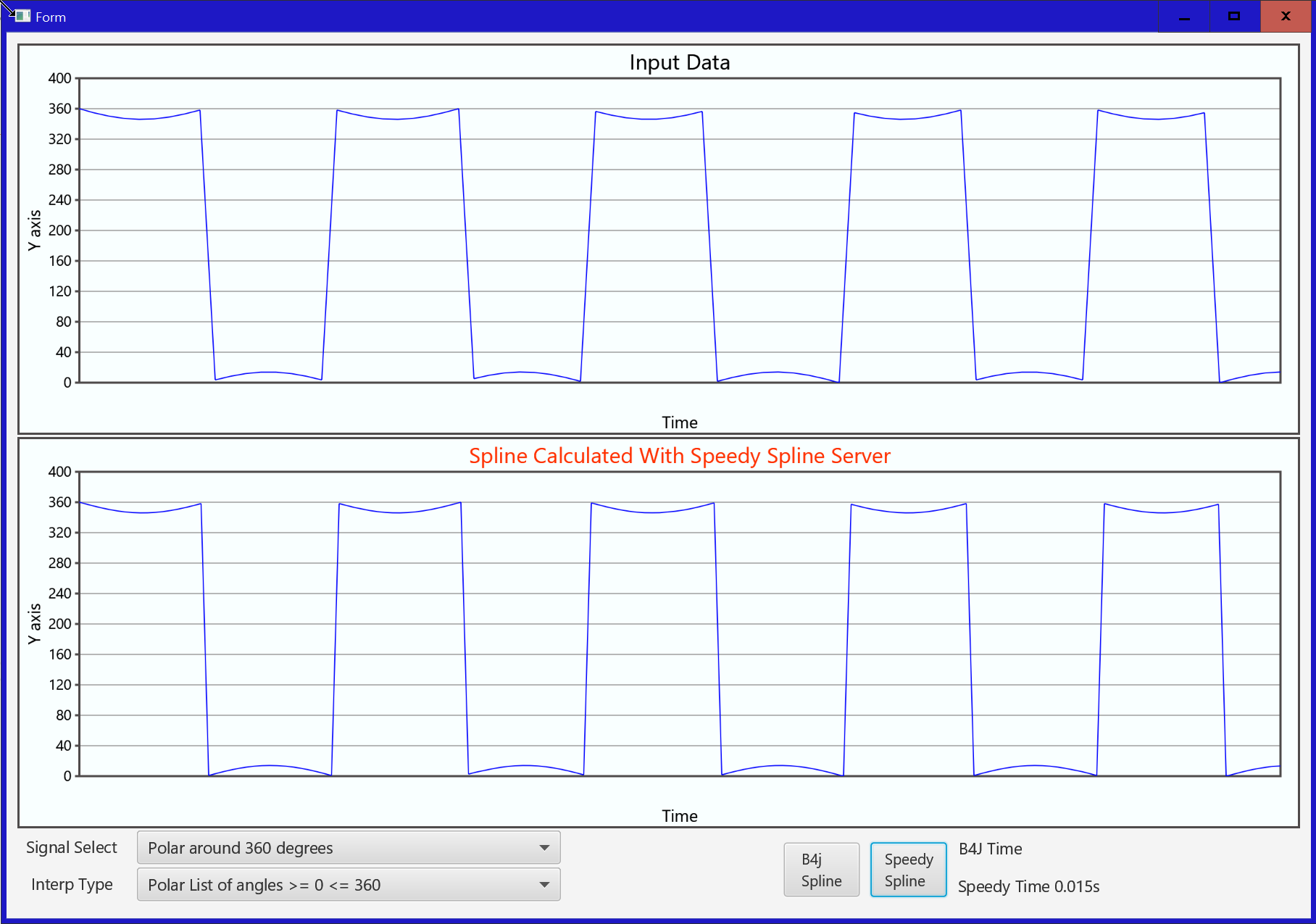 To use the polar calc the command to the server is:

The data format remains the same: a vector of doubles being angles in the range +/- degrees. Usually the range would be limited to +/- 180, but it doesn't have to be. But remember for compass values subtract 180 from the input vales then add 180 to the result.

I have attached the updated version of speedy spline and the test program.

I have left the original version as not everyone would need a polar transform.

I needed an interpolator to convert weather data stored at ten minute intervals to 5 minute intervals to match some power monitoring data I get from an sqlite db that aggregates
two second power data to five minutes. Five minutes is the trading interval of the Australian Electricity market.

I could have got sufficient accuracy with a linear interpolation as most of the weather variables are pretty slow with the exception of wind speed. However I always though that before I die I would like to develop an app using cubic splines. I plagerised some C code off the internet and converted it into B4J, very easy to do. This worked well except it was too slow for bulk data processing. I asked about how I could use a C++ dll called by B4J to implement a faster spline, but dll's are too hard and there is a better way; per MathiasM to whom I am indebted. MM suggested that I use the network local host to transfer data between B4J and a server written in C++ or some other language. Being a sick sort of person I went for C++.

The communications I am using is TCP over localhost and a selectable port no.

So I did all of this an viola I now have a speedySpline.exe mini server that takes a block of doubles and interpolates them according to the ratio you want. (There are even some stake knives for early adopters in the form of csv file output)

To talk to the server, B4J uses prefixed asynch transfers.

For data-base crunching this is a very useful speed increase and it's relatively easy to do.

I have posted a zip of the splineTest program that compares B4J with speedySpline and also the source and project file for VS 2019 that I used to develop it.


A copy of the speedySpline.exe file has been included in the B4J app Objects folder. speedySpline is run from there. The original is in the visual studio project under the 64 Bit directory.

There are command line arguments that can be used when speedySpline is run to do the following:
The csv feature was used for debugging, but it is also handy for viewing large data when integrating speedySpline into an app. For maximum performance the fastest option is no csvOutput. For the CSV files you can use either excel or better still Matlab which is much faster and has better import and display features.

You can run speedySpline from a command line console with "h" and the cmd line options will be output to the console.

The B4J test app is fairly straight forward so I won't bang on about it.

If anyone finds this useful and needs help getting it going just post a request.

I intend to provide spline and linear interpolation of polar data such as wind direction that will be commands 3 and 4 probably. Once youve done the code infratsructure and logic adding extra capability is a breeze.

The next project is to develop a fast random number generator which will produce accurate normal and other distributions.

I'm also thinking of large, multi channel FFT's with selectable window functions and bin averaging. The network interface is ideal for this, as data is nicely sized and consistent from one frame to the next. The FFTW library would be ideal for this.

PS I forgot to write a sub for the communications timeout in ipcComms
It's now fixed!

Active Member · From Toongabbie Victoria Australia
Electrical engineer specializing in dirty brown coal power plant controls technology; (Someone has to do it)


I have a three legged cat, very cheeky as you can see by my Avatar. My son has another cat called Karl, with four legs. He is a dead ringer of Sylvester the cat that tries to eat Tweety Bird in the cartoon. I also have a pair of Cockatiels.

I live on three acres about 3 k north of the Toongabbie township on a property called Toongabbie Light and Power with my wife and son.
Licensed User Longtime User
You must log in or register to reply here.