Here is a tutorial that shows the steps of how to make an Android connection to MS SQL Server using jRDC2.

Any questions please ask in the forum

Licensed User
Longtime User
Thanks a lot for sharing

Licensed User
I use online method to get commands:

B4X:
I think this is more convenient than the commands in a text file
Last edited: Jun 24, 2020

Licensed User
In step 6 of your tutorial, I find that my config.properties file is a pdf; your file in the tutorial is a text file. I get an error when I double click the pdf. The error message says: Adobe Acrobat Reader could not open 'config.properties' because it is either not a supported file type or because the file has been damaged (for example, it was sent as an email attachment and wasn't correctly decoded). I'll look into my c:\\drive at the file.
Shelbrain

Licensed User
Right click the file and open it with notepad instead of adobe acrobat. Probably you have assigned .properties extension with adobe acrobat

Here are the steps to configure the notepad as editor for the config.properties file in JRDC2

1. Go to configure the external editor 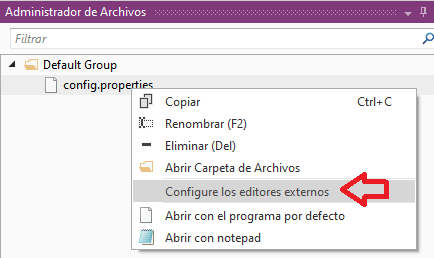 3. Verify that Notepad already appears as your default editor. 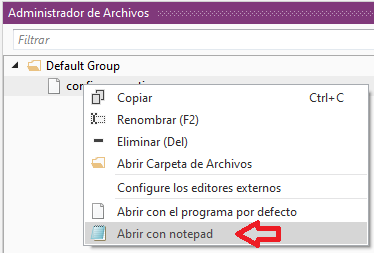 Licensed User
Thanks, however, I don't have a file or folder called notepad.exe. In my Windows 10 System32 folder, I have an empty notepad file called 'notepad' of type Application. Edited: What I did was to remove the config.properties file which was a PDF I think it was and reintroduce it after opening it as a text file as Jose suggested in post # 6. Now I'll see if I can proceed as your tutorial instructs me to.
Last edited: Jan 4, 2021
Shelbrain

Licensed User
Longtime User
You need to download and install Notepad ++, if you haven't already done so ...

Licensed User
Thanks kisoft, I solved the problem with my above **edited post #9. Now I'm tryng to get a URL either for my browser or my computer for the step #7 in Bladimir's tutorial. It's not clear for me to understand which URL I need.
Shelbrain

Shelby said:
It's not clear for me to understand which URL I need.
Click to expand...

Where's your MS SQL database? In another computer in your network? In the same computer you're developing? In internet?

If it's the same computer, you can write "localhost"

B4X:
That's because your jRDC2 server and your MS SQL server are in the same computer.
In the client (B4A app?) you should write your pc local network IP (you can get it going to console and writing "ipconfig", or in your network card properties, it will be something similar to 192.168.0.x or 192.168.1.x"

Licensed User
I don't know why when using run>ipconfig, a window blinks but does not display (windows10). I'll try the network card properties (I'll do search to find the card) OK I found it; so I put the 192.168..... in the file, not local host like you mentioned in post #14, right?
Last edited: Jan 4, 2021
Shelbrain

Licensed User
Oh yeah the cmd first; I forgot, Thanks. It verified that the IPv4 address is the same as the settings entry...... so I put the 192.168..... in the file, not local host like you mentioned in post #14, right? Maybe I should write 'local host'. Right now it reads:

José J. Aguilar said:
It's ok too
Click to expand...

OK, I'll leave it as localhost
Thanks for your patience and energy...! For all I know you're in Europe and it's bedtime.
Shelbrain

Shelby said:
Europe and it's bedtime
Click to expand...